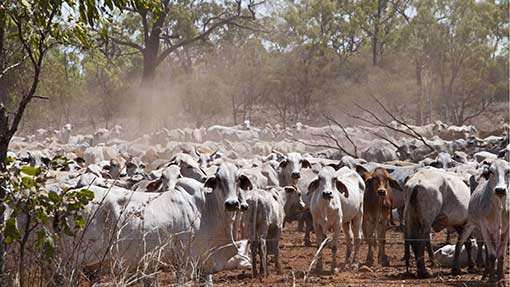 The suicide rate among farmers in drought-stricken Australia has risen to an all-time high.

With no significant rainfall for the past two years in more than 70% of Queensland and 62% of New South Wales, farm incomes have been hard hit, with farmers left struggling to cope.

See also: The latest on the UK’s flood crisis

The suicide rate is said to have increased sixfold.

In Queensland alone, one farmer takes his life every four weeks and a third of farmers are said to be in a state of depression.

Estimates of the growing toll on livestock suggest that up to 10,000 animals are dying every day.

Desperate tales are emerging from the two regions. One grazier shot his 400 malnourished cattle after the farm finally ran out of feed, then he took his own life.

He tried to have the animals moved elsewhere but was told they were too weak to travel.

Volunteer-run organisation Aussie Helpers is visiting farming families in desperate need of assistance. Founder Brian Egan said: “The mental stress suffered by watching your stock die, your family’s livelihood – and in some cases generations of family work – fail is crushing.”

Meanwhile the Australian government has promised a multimillion dollar bailout to ensure the survival of the agricultural sector.

Mr Abbott said: “The important thing is that the government has a [farm assistance package] response that is intelligent, fair and [fiscally] responsible.”

The drought package is expected to be signed off in the next week.

Details of its contents have not yet surfaced but Australia’s National Farmers Federation is pressing for the existing AU$420m farm finance package to be increased.

And the federation has added that it is determined to continue efforts to relieve pressure on debt-laden farmers, seeking AU$5,000 grants and wage subsidies to support them.