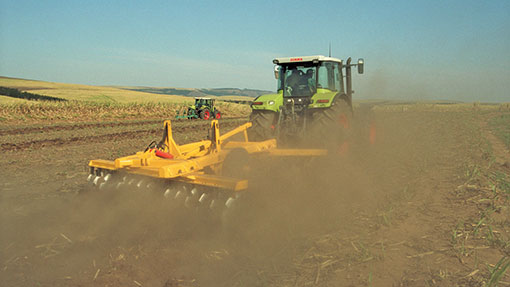 In January we looked at the difficulties of farming through the freezing winter weather in Saskatchewan, Canada. This time Arthur Gray, an agricultural journalist from South Africa, explains what it’s like farming in one of the hotter parts of the world

Temperatures can reach as high as 40C in the summer and often stick at 35C for weeks at a time, so farming in the warmer regions of South Africa presents some unique problems.

One of these not often mentioned is dust. Cultivation methods have a big effect on the quantity of dust and that, in turn, can limit machinery life. Ant Muirhead, a farmer near Winterton in KwaZulu-Natal and the voice of no-till farming in South Africa, reckons that since changing from normal full cultivation, involving ploughing and discing, to a complete no-till regime his tractors have lasted at least twice as long.

He attributes this to the lower overall power requirement and also to the fact that there is less dust with no-till systems. When ploughing and discing in summer the tractors are usually lost in clouds of dust, which makes air-cleaner servicing vital and in the past some tractor models have required modified systems. Most of the tractor imports are specced for the local conditions but an air filter can still block in less than 100 hours.

The same goes for cooling systems, most of which are of a higher specification than those on tractors used in cooler climes. The performance of these is critical in the summer if tractors are run at their optimum power in temperatures of 35C.

Across the country farmers work through the summer months. Unlike Canada, cultivations, fertiliser application and spraying still goes on throughout the season.

It can be a hot job, though. Tractor cabs were a long time coming to South Africa and are still only common on tractors over 135hp. When fitted, they invariably have air-conditioners as they would be uninhabitable without them in the summer.

Rainfall can vary from season to season and area to area. On the maize lands of the Highveld farmers can expect from 450-600mm a year but this is often in the form of severe thunderstorms, sometimes putting down more than 100mm in a day. In these conditions, run-off can be excessive, especially with conventional tillage.

Drought is an ever present threat and there can be long periods at the height of summer, January and February, when there is no rain at all. This can result in the ground being too hard and dry for planting. Worse if the rains don’t come after planting, then the whole crop can shrivel and die.

Summer lasts, in effect, from September to April, in the same way that winter in Saskatchewan can last from October to April. Summer crops include maize, sorghum, sunflower and soya with only one crop a year possible in non-irrigated lands. 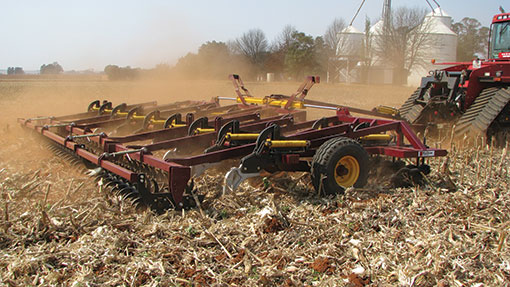 Dry land can be difficult

Anyone who hasn’t experienced hard African soil has difficulty appreciating the amount of power required to break it up. I had the problem about 40 years ago when I introduced the first rotary harrows into South Africa.

The Dutch manufacturers, who had never been here, could not conceive that a 3m power harrow that worked fine behind a 60hp tractor in Holland could stop a 100hp tractor stone dead in our rock-hard soils.

The Radium Combo ripper is typical of the implements that have been designed locally in order to handle the difficult conditions. This has disc coulters to cut through crop residue and heavy duty tines with hydraulic auto-reset that can penetrate up to 500mm into hard ground with plough pans or compacted by heavy harvesting equipment.

Spiked rollers at the back break up the clods. This all takes power – the unit in the photo on the bottom right of p68 is behind a Quadtrac but eight-wheel articulated units are not uncommon.

Some South African soils are also incredibly abrasive and this, combined with the dry conditions, means that soil-engaging parts can wear very quickly in some areas and daily share changes are not uncommon in the worst conditions.

Ploughing is not the universal prime cultivation that it once was but there is still a lot of deep ripping on the row in sandy soils and chisel ploughing and discing on heavy soils.

Conservation tillage, in its various forms, is growing fast with some interest in strip-till but it is still not accepted as viable for all conditions. More and more specialised equipment is becoming available with most of the leading European manufacturers, as well as some from North and South America, represented locally so the area being ploughed continues to decline.

The Horsch Focus TD precision maize planter was developed especially for the South African market and can be adapted to plant canola (OSR), wheat, soya beans or sunflowers.

In South Africa, the term no-till means just what it says with nothing between the combine and planter except the sprayer. Contrary to the practice in colder climates, where a strip of uncovered ground allows it to heat up, the opposite applies in hot climates where a complete blanket cover helps to prevent the ground overheating and drying out.

Crop residue provides protection from the excessive heat, which can get very intense on the ground between the rows. Row widths seem to be getting narrower for the same reason – it seems unthinkable that years ago a lot of maize was planted in 2m rows.

This was to make the most of the available moisture and also allow mechanical inter-row weed control, but the soil temperature between the wide rows could rise to astronomical heights.

Leaving the crop residue on the land also protects the soil from capping in heavy rain and prevents the soil blowing away when it is dry, but it is important to have a system that ensures that the residue doesn’t blow away as well. 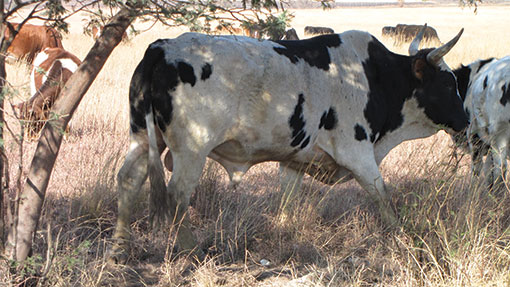 Not all cattle breeds can tolerate the heat

Livestock running on the veld have to rely on shade trees in order to find some relief from the midday sun. Cattle with short coats do best and some European breeds have a difficult time.

The Nguni cattle breed, indigenous to southern Africa, is known for its fertility and resistance to diseases. Nguni is claimed to be the outstanding beef breed for optimal production under harsh African conditions.

South Africa’s Nguni have long been the mainstay of traditional Zulu culture – they are beautiful animals with a variety of patterned and multicoloured hides that are in great demand.

Watering can be a problem, though, sometimes requiring very deep boreholes yielding low volumes meaning the water is consequently expensive. Irrigation water is strictly controlled and also expensive, and limited in most areas outside the proclaimed irrigation areas where it is mainly used for intensive vegetable production.

Pollution of water sources by acidic water, sometimes with a heavy metal content pumped from mines, is also an issue.

In the Northern Cape Province there is a town called Hotazel that takes its name from the farm on which it was laid out and is obviously a pun referring to the weather prevailing at the time the farm was surveyed.

The average daytime temperature in the hottest summer months in this offbeat tourist destination is about 33C.

Tough, abrasive and dry African soils cause clouds of dust and wear metal very quickly so farmers are switching from heavy cultivations to min-till systems.