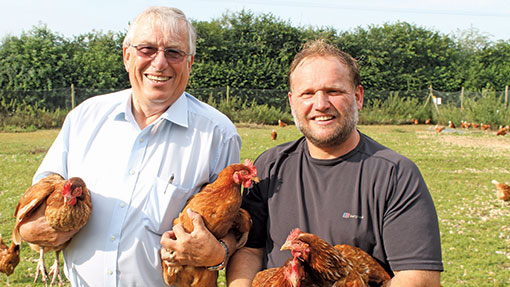 Setting up an egg farm in Uganda is not without its challenges, as Philip Clarke discovers.

It’s a long way from rural Sussex to the bush of central Uganda – both geographically and emotionally.

But it is a journey that organic egg producer Peter Barton and son-in-law Danny Macmillan have made several times, as they have become deeply involved in a project to set up a commercial egg farm for Christian charity, Watoto, in that long-troubled country.

“To appreciate the importance of this project it is necessary to understand the story behind Watoto,” says Danny, whose normal job is helping to run The Mac’s organic egg farm in Ditchling, with wife Susie.

“The charity was set up in 1994 by Canadian missionaries Gary and Marilyn Skinner. It aims to rescue, raise and rebuild the lives of some of the thousands of orphans and ex-boy soldiers that populate Uganda. These children have suffered from hunger, sexual abuse, war, poverty, disease and degradation that is painful to even think about.”

Watoto has provided homes and a family environment for about 3,000 orphans so far in small village communities. But, as its residents get older, the charity also needs to find long-term solutions and opportunities for its charges. So it is getting into agriculture and has embarked on a long-term programme of acquiring land – which incidentally is as expensive in Uganda as it is in Europe – in order to support a fast-growing community.

Within this, commercial egg production is seen as an ideal enterprise, providing nutrition, income and manure during the life of the flock – plus a good meal for hungry mouths at time of flock depletion. 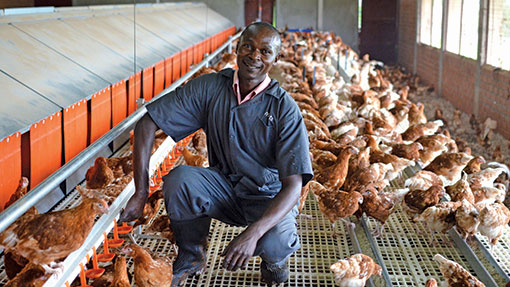 Peter and Danny’s involvement with the project started about six years ago, when the Watoto children’s choir performed one of their much-lauded concerts in the local Sussex town of Burgess Hill.

They were so moved by the experience that they ended up sponsoring an orphan. “But we also got talking to some of the adults and mentioned that we were egg producers,” Peter recalls. “They said they were planning on developing a chicken farm and asked if we could help.”

Soon after that, Peter made his first trip to Uganda, to prepare an initial feasibility study, and concluded that it might just work.

“We kept in touch and I continued to give advice, while helping to find backing and expertise. In the end, they came over here to visit my egg farm in Sussex, and they were just blown away by what they saw.

“They said they wanted that sort of system in Uganda, and insisted that with electricity, water and people, it was definitely achievable. So we put together a package and designed an egg-laying unit for them.”

The location for the venture was on a smallholding called Buloba, just west of the capital Kampala, near Lake Victoria in the heart of the country.

The farmer, Moses Kisembo, had already made an attempt to start egg production in a wood and tin pole barn. But, just as his 10,000 birds were coming into lay, the local bank pulled the plug on the venture and, with no funds for feed, the birds literally starved to death.

Watoto heard about this and stepped in to buy the farm, seeing it as a good site for egg production.

For the next few years, Peter acted as a consultant, while support was driven by Watoto’s chief fund raiser Randy Sohnchen. Crucial backing was obtained from Germany-based Big Dutchman, which provided much of the kit, while one US benefactor alone contributed more than US$1m (£585,468) to the project.

The farm is now into its first flock – but getting this far has been a bumpy ride.

The old pole barn is still standing, but a new layer barn, complete with nest boxes, chain feeders and nipple drinkers stands alongside.

Peter and Danny first went out to the farm in September 2013, just before 8,000 ISA Brown day-old chicks arrived. The whole thing had been constructed by Watoto staff in less than a year, even to the extent of making their own bricks, fabricating their own steel and constructing their own feed mill.

“The new shed was up and ready, and looked beautiful, bedded down with coffee husks.” Water was drawn from a borehole with a solar-powered pump, and feed – a basic mix of maize and home-dried fishmeal – was produced in the new hammer mill.

“But the farm staff knew nothing about poultry management and it was not long before things started to go wrong,” Danny recalls.

The first problem was with the brooders, located in the scratch area of the layer shed. While new ones had been supplied by Space Ray, they were not able to cope with the local, dirty butane gas. “We found this out two days before the chicks arrived, so had no time to find alternative injectors or gas supplies.” 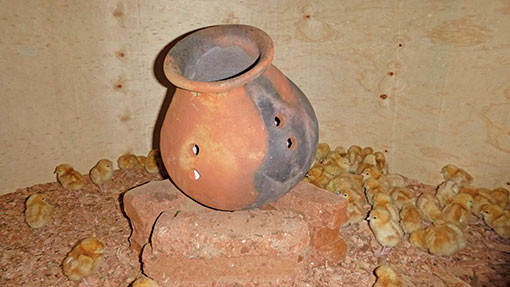 The solution was to revert to a traditional African method of brooding, using terracotta pots, filled with burning charcoal. Despite the obvious fire risk, this still did the job. “Many of the workers sleep in with the chickens anyway, so could keep an eye on things.”

Another problem was with the power supply. “The set-up is fully automatic, but that is only any good when there is electricity,” says Danny. “Frequently there is none, and they often run out of fuel to run the emergency generator.”

Even with power, the unit ran into other problems with feed chains snapping and water lines blocking.

But somehow the pullets made progress, being vaccinated for fowl typhoid and beak trimmed “the traditional way”, and coming into lay at about 19 weeks. 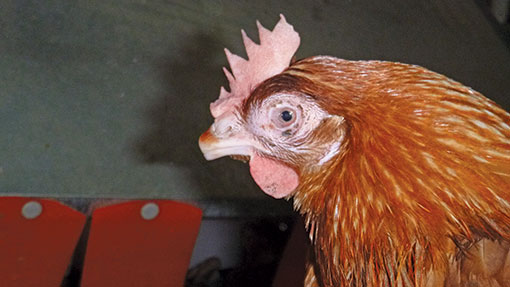 Wind the clock forward seven months, and Danny returned to Buloba in May to see how things were going.

“Most of the emails we had received from the farm in the interim suggested things were going well,” he says. “Apart from reports of broken shear pins and some losses from smothering, we were assured that the birds were in good health.”

Arriving on farm told a very different story. The flock was subdued. At 32 weeks the birds had the bodyweight of 21-week-old hens. They were effectively on a starvation ration, with not enough water and too much light. Some were also found to be blind, due to disease, compounded by eye-drop vaccination. “I reckoned that, in another two weeks, they would be dead,” says Danny. “I also discovered that, as birds were dying, the staff were either eating them, or giving them to the locals.”

The first thing was to fix the drinkers. “The staff had gone back to traditional methods, with girls carrying 15 litre containers in two at a time to fill up the buckets. It was clear they did not trust the nipple drinkers, and had neglected to unblock the header tanks. So I had to recharge the system, tap the nipple drinkers so the birds could see the water, then get the staff to lift them off the floor and on to the slats. After two days, they were drinking again.”

Another issue was with the feeders. Monsoon rain had got into the silos and turned the feed at the bottom of the augers to concrete. So again the staff had gone back to traditional methods of feeding by hand, though most of the feed was falling through the slats and creating a major vermin problem.

With little prospect of repairing the system quickly, Danny and Watoto’s mobile welder set about making a so-called “greedy bin”, which supplies the chain feeders continuously, but still has to be filled several times a day by hand.

And then there was the issue of broody birds. Half the flock, it seemed, was on the floor in the scratch area due to the intensity of the light coming in through the windows. “The Ugandans had a simple solution – to dunk the broodies in a barrel of cold water and then move them to the old pole barn.”

The longer term solution was to procure some green netting and stretch it along both sides of the building. “Again we had to physically lift the birds up on to the slats to get them using the nest boxes and cut down the number of floor eggs.”

When Danny arrived at the farm the birds were achieving less than 40% production at about 32 weeks. But by the time he left, they had definitely turned a corner and latest production records show they are nearer to 75% at 42 weeks. “The next flock will show if we have nailed it,” says Danny.

The plan is to cull the flock at 72 weeks – next January. Replacement pullets will be reared from September in the original pole barn, ready to transfer to the layer shed at 16 weeks.

Once the problems with the flock have been overcome – and Danny insists that is just a matter of education – then Watoto aims to put up another three sheds, taking bird numbers to more than 40,000. The charity also wants to extend the model to other farms in the country, and is hoping to recruit a volunteer poultry manager from the UK to help keep things on track.

Some of the eggs will still go to feed the children in the orphanages. But the bulk will be sold into the open market, generating much needed cash for further investments. That’s the plan, though it is clear that, in Uganda, just about anything can happen.

During his last trip to Uganda, Danny kept a detailed blog. Here are some of his observations:

Peter Barton and Danny Macmillan have exported their poultry knowledge to Uganda, where the Watoto charity has invested in a new layer unit.

Work to rebuild a nation

Watoto, which means “the children” in Swahili, is an holistic-care programme, initiated in response to the overwhelming number of orphaned children and vulnerable women in Africa, whose lives have been ravaged by war, poverty and disease – particularly HIV and Aids.

Its ethos is “to rescue an individual, raise each one as a leader in their chosen sphere of life so that they in turn will rebuild their nation”.

Watoto fulfils these goals by building children’s villages. Each brick house contains a “housemother” who takes care of up to eight children, of two-years-old and above. And each village contains schools, a water project, a medical clinic and a multipurpose hall for use as a church and community centre. Baby Watoto caters for infants under two. It has three children’s villages and babies’ homes, looking after more than 3,000 children and infants.

When the feed augers broke down, a hastily built “greedy bin” provided the solution, sitting above the chain feeders in the layer house.

Big Dutchman provided most of the kit for the shed.

Beak trimming was carried out “the traditional way” by hot blading.

Terracotta brooders did the job in warming the chicks.

Armed guards are on hand to protect the feed and the chickens.