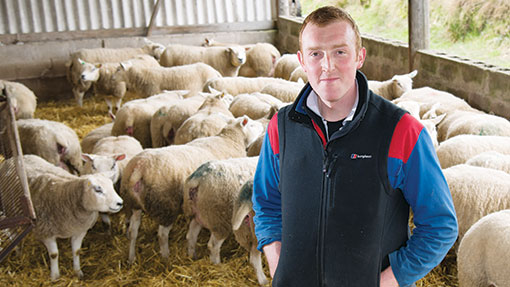 Is the New Zealand-style sheep system the route to successful prime lamb production in the UK? One Cumbrian sheep producer is not so sure.

The wide variation in successful sheep production systems in the UK should not have their credibility challenged by the current fad to promote New Zealand ranch-style shepherding.

That’s according to Cumbria sheep producer Will Case, who’s concerned too many people may get swept away with the concept of New Zealand farming without fully evaluating it.

“Profitable sheep farming is about putting round pegs in round holes and the current systems practised in the UK do precisely that.

They have been developed by generations of skilled stock-keepers to suit all situations of climate and terrain, and if we start to assume that the only way to make money out of sheep is to ranch-farm Romneys we’ll be doing our industry serious harm,” he adds.

Mr Case spent time in New Zealand and says he’s well aware of the success that country’s sheep farmers have achieved by adopting a style of flock management that suits that country, its landscape and its sheep.

“And I know it’s working well here for some people, but it’s not for everyone. So let’s not throw the baby out with the bath water.

“We do what we do with sheep in the UK because it works,” says Mr Case, who runs 1,000 commercial ewes alongside the Nab Point flock of 90 pedigree Texels.

Farming on the west Cumbrian coast and with 60in of rainfall, he’s adamant he will “always need a sheep shed on a farm like this.”

And while he has new goals and fresh challenges ahead for his flock, he’s confident his current system – similar to many others across the UK – has been developed to suit the farm.

Texel tups are used on the North of England Mules, Charollais tups on the Texel-crosses and some Suffolk tups are also turned out with 250 ewes run on marsh grazings, which produce Saltmarsh lamb.

About 170 of the older ewes are lambed for a final time in mid-February with the aim of selling prime lambs – and the ewes on to the cull market – in May to mid-June.

The main flock starts to lamb from 10 March and all lambs are finished with most sold liveweight at 41-43kg. The 400 Saltmarsh lambs are sold deadweight.

“I’m confident about the future of the sheep industry in the UK because we all benefit from the sector’s diversity and the all-important link between the uplands and the lowlands.”

Mr Case is satisfied with his margin per ewe but acknowledges there are always improvements that can be made in terms of reducing costs of production and improving efficiency.

“But we’ll be making improvements within our existing system and believe others can do the same without jumping headlong into a totally new approach to farming sheep.”

The flock’s main focus for the future is to sell every lamb off grass by the time tups are turned out in the autumn.

“That’s the dream and we’re on track; we’re currently selling 90% of all our lambs by that time. We’re trying to get lambs away as efficiently as we can all the way through the season so that we’ve always got grass coming in front of the flock.

“Our first draw of lambs at 41kg creates a snowball effect. It creates more room on the pastures, puts more grass in front of the sheep and helps us make the best use of grass throughout the season.

“There’s no point in hanging on to the first lambs to get them to 46kg – all that does is slow up the whole system.”

And EBV recording of the farm’s pedigree Texel flock is also going to be put to a practical test. “We start recording with Signet this year and will be looking closely at the fat scores of our rams. In the past breeders have been encouraged to achieve a minus fat score on the EBV, but I’m now wanting a positive fat score.

“As a sheep industry we need to be producing more from lower inputs and if we can produce Texel tups with that sort of fat score and that have the ability to finish off grass without losing anything on conformation, we can make even more progress.

“Our deadweight lambs are mostly achieving R and U grades but the Saltmarsh lambs are a leaner type of carcass – usually 3s and 2s.”

Mr Case firmly believes the proven commercial traits of the North of England Mule, the carcass qualities of the Texel and an on-going commitment to make the best use of grass for finishing, are the key elements of widespread successful prime lamb production in the UK.

“UK sheep farmers should have more confidence. The promotion of radical changes to sheep production systems in the UK must acknowledge that they are not a cure-all that will make profit where profit doesn’t exist already.”