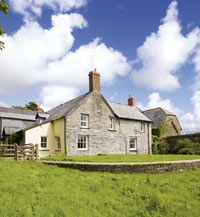 Strutt & Parker is marketing two farms at opposite ends of Britain.

Milton of Fintray (advertised in Farmers Weekly this week) has a successful turf enterprise and a six-bedroom farmhouse with 220 acres and half a mile of trout fishing on the River Don. The guide for the whole is £2.1m but the farm is lotted four ways. Most of the turf business lies on one, 63-acre lot and the vendors would consider selling the turf business wholesale with its equipment.

Meanwhile, the firm’s James Baker is selling Wallover Barton, a 392-acre farm near Bratton Fleming in Devon. There is a Grade 2 listed farmhouse (left) with a pair of let cottages. Livestock buildings are well-equipped with “innovative” covered races and handling facilities. About half of the land is within Exmoor National Park on Wallover Down. The guide for the whole is £2.6m. Mr Baker is also looking for buyers for three parcels of Grade 2 and 3 arable land at Ide, near Exeter.