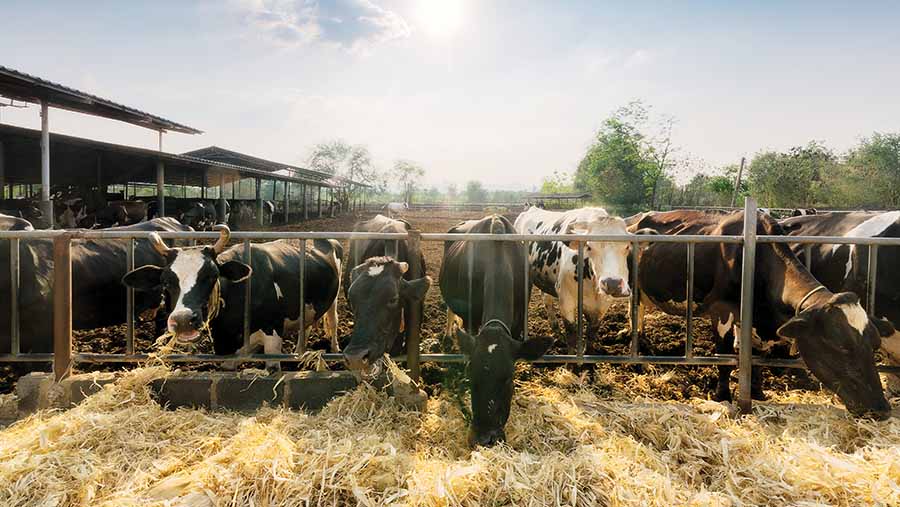 US farmers have been handed a $19bn (£15.2bn) government lifeline as the coronavirus pandemic has wiped billions from the agriculture sector’s value and sent thousands of farm businesses to the brink of bankruptcy.

Following a difficult 12 months marred by president Donald Trump’s trade war with China, the industry had been forecast to see profits rise by 2.8% in 2020.

However, experts now believe farmers could see profits drop by more than 2% on last year’s figures – totalling losses of more than $20bn (£16bn).

While all sectors of the industry have suffered sudden losses of domestic markets, a slump in export trade and challenges in processing and logistics, dairy and pig farmers have been hardest hit.

More than 5% of the country’s milk supply is currently being tipped away after demand for milk from cafes and restaurants evaporated  overnight. Prices for milk are currently down by more than a third on last year’s at 36c/litre (29p/litre).

With more price drops expected, the National Milk Producers Federation (NMPF) said US dairy incomes were expected to decline by 58% this year, with average losses of about $345,000 (£276,600) per farm.

NMPF chief economist Peter Vitaliano said prices were expected to fall even further in the next two months, while recovery was likely to be slow.

“When we get to October we will have maybe recovered about halfway, [but] will still be 9c/litre (7p/litre) down on the outlook for pre-Covid-19,” he said.

Meanwhile, the US pig industry has issued dire warnings about its future after prices fell by more than 30% on the back of low demand and the widespread closure of processing facilities due to staff contracting the virus.

Howard Roth, president of the National Pork Producers Council, said millions of pigs needed to be euthanised, meaning producers faced having to liquidate their businesses.

US pig sector in crisis

Expectations of rising prices and increased international demand for pigmeat had meant US hog farmers were hopeful that 2020 was going to be a good year.

Instead, economists claim the sector is now looking at losses of about $5bn (£4bn) after demand from restaurants – which account for almost 25% of pig sales and three-quarters of US bacon consumption – disappeared overnight.

The situation has been further exacerbated by the closure of major pork processing facilities across the country as staff have succumbed to Covid-19.

Last week, almost 40% of the country’s processing capacity sat idle. For an industry that slaughters up to 12 million pigs a month — and with some slaughterhouses processing 20,000 animals a day — the results have been significant.

Producers have attempted to adjust nutrition to slow down production (see case study), but given that the majority of animals are raised in barns, most farms don’t have room to keep pigs for longer, or space for new animals coming into the system.

“I think we could see around 2.5 million pigs being euthanised across the US,” said one industry vet, who asked not to be named.

He said he worked with one farm which had euthanised 3,000 market-ready pigs last weekend, while he knew of others which had been forced to abort healthy piglets.

“It’s heartbreaking for producers and their staff to have to destroy perfectly healthy hogs,” he said.

“Getting consumers to understand why we’re euthanising pigs will be tough, especially when the number of people relying on food banks is going up.”

While the government has announced a $3bn (£2.4bn) package to buy fresh produce and increased the number of pigs producers can legally keep in barns, National Pork Producers Council president Howard Roth said it was not enough to solve the sector’s problems.

He has called on Washington to buy an additional $1bn (£800m) of pork currently held in storage, as well as offer compensation for euthanised livestock in order to keep the sector afloat.

“We are taking on water fast. Immediate action is imperative, or a lot of hog farms will go under,” he said.

“The pork industry is based on a just-in-time inventory system. Hogs are backing up on farms with nowhere to go, leaving farmers with tragic choices to make.

“Dairy producers can dump milk. Fruit and vegetable growers can dump produce. But hog farmers have nowhere to move their hogs.”

In response to the situation, the federal government announced a Covid-19 Food Assistance programme which it said would provide immediate support to farmers and ensure supply chain integrity.

Under the programme, farmers will receive $16bn (£12.8bn) in direct income aid, while an additional $3bn (£2.4bn) will be spent on food purchases and distribution. This will see the US Department of Agriculture partnering with local distributors to buy fresh vegetables, fruit and dairy produce which will be distributed to food banks.

While the move was welcomed by livestock groups, organisations including the National Chicken Council warned that a “patchwork” approach by different states to maintaining operations and following distancing guidance put the supply chain at greater risk of disruption.

“There needs to be a uniform approach across states,” it said. “When considering human health and food supply issues, time is of the essence.”

The family should be gearing up for their busiest time of the year, with almost 3,000 pigs due to leave the farm this week.

However, their local processing facility closed at the end of April after three employees tested positive for Covid-19, and the family are now worried about how they are going to feed and house a backlog of animals.

“We average about 2,500 hogs leaving the farm every week at this time of year,” said Mr McCrory, who manages a staff of six full-time employees as well as contract finishers made up of neighbours and relatives.

“Because the plant was already operating to reduced capacity due to social distancing, we only had 1,700 animals go out last week.

“Half of our pigs are due to leave over the next couple of months, so this really is the worst possible time for this to happen.”

Mr McCrory said he had begun reducing rations a few weeks ago in anticipation of a shutdown, but the stress of housing and feeding a backlog of animals, coupled with volatile prices, was taking its toll on the business.

“If this lasts, I’m not sure how long we can keep running. I think it’s 50/50 if we will be in the pig business at the end of the year: we can’t absorb losses like this, and I don’t know anyone who can.”

Despite the uncertainty, Mr McCrory said he would keep going as long as he was able to.

“We have contracts with neighbours; we’ve made commitments to people we know and got loans and contracts that would be hard to get out of,” he said.

“We’ve been told we should get some limited processing happening at the plant this week, but we don’t know yet how many we can send. We’ve just got to hang in there and see what happens.”