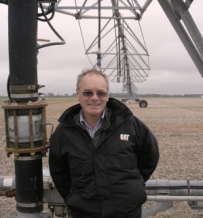 Irrigation systems that allow each nozzle to apply variable rates of water according to soil type and moisture deficit are improving New Zealand farmers’ water use efficiency.

Irrigation is central to the success of both dairy and cropping systems on the Canterbury Plain, and elsewhere in New Zealand. Rainfall during the growing period is typically only 250mm in Canterbury, with the potential for nor’west winds to remove 5-8mm of moisture a day.

However, water use is restricted, which means farmers need to be efficient in their use of water.

That requirement, plus the realisation that soil types could be extremely variable under large irrigation systems, suggested that variable rate irrigation could help, said Carolyn Hedley, a soil scientist from Landcare Research.

She uses electromagnetic mapping to analyse soil type under irrigation systems, creating zones in which soil moisture probes are placed that wirelessly transmit moisture deficit information from two depths back to a central base station.

“It gives you real-time moisture monitoring accessible through a website.”

That information can then be used to produce irrigation maps for the amount of water needs to be applied in each zone.

The water required is then applied using a variable rate irrigation system developed by Precision Irrigation, which individually controls each sprinkler head to apply the correct amount of water.

In studies, farms using the system have saved up to 20% water, with no loss in yield. “With a water saving, and the same yield, there is obviously an increase in water use efficiency,” Dr Hedley said.

Potentially the whole system could be automated to apply water at a designated soil moisture deficit, for example, she added.

Over 20 variable rate irrigation systems are now used commercially, 18 in New Zealand, including those at Eric Watson’s all arable cropping Rangitata Holdings, Wakanui in Canterbury.

He was already seeing the benefits, he said. “We had around 5.5ha of overlaps in the system, which variable rate technology has allowed us to cut out.”

Measurements on two booms using water meters suggested he was saving around 12 litres/second across both systems. “The payback is going to be quicker than I originally thought. Instead of being seven years, it might only be five.

“We’ve also found it gives the ability to use another irrigator elsewhere on the farm if we’re only using half of one boom, for example, which helps apply water when crops actually need it.”