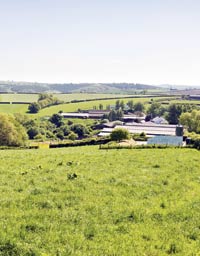 An unusually large and well-equipped farm in the West Country is expected to attract considerable interest when it comes to the market next week.

Hawkridge Farm, near Crediton, Devon, is a diverse 500-acre commercial farm with extensive dairy, chicken and pig finishing buildings. Overlooking the Taw and Yeo valleys, it has a six-bedroom farmhouse, currently divided into two separate living areas, and three agriculturally-tied bungalows for farmworkers.

“Hawkridge Farm is an immaculate holding which has been exceptionally well farmed,” said Penny Dart, head of Savills farm agency in the south west. “It is rare for such a well-equipped farm of this size and diversity to come to the market in this region, and we anticipate keen interest from prospective purchasers across the United Kingdom and from abroad.”

The farm is currently running a 200-cow dairy herd with followers, and a pig finishing unit housing 2700 pigs. There are also 120 acres of organic land with 40,000 free-range chickens, and three brood units on the main farm site.

The farm is being offered as a whole or in two lots, with a guide price of £3.25m.

Savills also has three East Anglian arable farms for sale, including part of the Nocton Estate near Lincoln. Grange Farm is a 356-acre Grade 2 arable farm with irrigation, a three-bed bungalow and rental income from let farm buildings of £25,750 a year. “It’s a very farmable and easy to maintain farm, with a good income coming off it,” said agent Christopher Miles. “There are quite a few strong neighbours up there, and I think there will be a number of investors after it, too.” Grange Farm is guided at £2.5m.

Model Farm, Grafham, Cambridgeshire, is also predominantly Grade 2 land, extending to 411 acres. It comes with a three-bed cottage and modern farm buildings, including 2250t of grain storage. The vendors are emigrating to farm in Australia, and the farm is guided at £2.63m.

Potential buyers of bare land need look no further than Vicarage Farm, Potton, Bedfordshire. It has about 450 acres of arable land and a range of traditional buildings, and is to be sold at auction on 10 July.