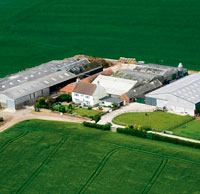 Productive arable land in Yorkshire can be hard to come by, but buyers are currently spoilt for choice, with two new farms on the market.

Deighton Grange Farm, near Northallerton, is an outstanding commercial mixed arable farm in North Yorkshire. With 311 acres of prime arable land and 21 acres of woodland, it is expected to attract considerable interest, says agent Andrew Dickins of Robin Jessop.

“Deighton Grange is a highly desirable and very productive farm situated in this renowned farming area between Northallerton and Darlington. It is a truly wonderful farm – I have always admired it as I’ve passed – and I’ve never seen a set of farm buildings like it.”

The traditional four-bedroom farmhouse has been sympathetically modernised, and has “absolutely stunning” views across the hills, he says. It stands in a secluded position with established gardens, garaging and parking, and comes with an extensive range of modern and traditional farm buildings totalling about 54,000sq ft.

The farmstead is centrally located within the ring-fenced land, with good internal access tracks. The soil ranges from sandy to a medium clay loam, and is classified as Grade 3. “It has been well farmed and is in good heart, as evidenced by the current crops of winter wheat, winter barley and winter oilseed rape.”

The farm buildings include a number of general purpose sheds, livestock buildings, grain stores and a grain drier. Although very private, the farm is just five miles from Northallerton, offering purchasers the best of both worlds, says Mr Dickins. “It will appeal to farmers seeking to relocate, or perhaps local farmers wanting to buy an extra holding for their son to take on.” It is guided at £2.75-£3.25m.

Meanwhile, Savills has just launched a small arable farm in the centre of Yorkshire’s “golden triangle”, with two houses and 85 acres of land. Park Hill Farm, just one mile from Wetherby, has tremendous potential to create a small country estate, says agent Andrew Black. “It is in the most desirable location in Yorkshire, with undulating land and south facing views. It’s a fabulously beautiful bit of countryside, and it could appeal to a variety of buyers.”

The four-bedroom farmhouse is in need of modernisation, and could be extended to create an impressive family home set in extensive mature gardens and parkland. In addition, the farm has a two-bed bungalow, which has been modernised. It is currently let on an Assured Shorthold Tenancy, but could also be used for family or staff accommodation.

Although subject to an Agricultural Occupancy Condition, the property could lend itself to equestrian use, says Mr Black. The Grade 2 land comprises well-drained loamy soil, and is currently under arable production. “There are limited opportunities to buy agricultural land in this part of the world, and we’ve already have a lot of interest from prospective purchasers.” Park Hill Farm is on the market for £1.5m.

Further north, in County Durham, George F White has a small farm to let in Ingleton, offering the perfect choice for those seeking to get on to the farming ladder. West End Farm includes a four-bedroom farmhouse, a range of farm buildings and 46 acres of pasture. “For those people who have always dreamt of being a farmer but couldn’t afford to purchase a farm, this is the perfect the answer,” says the firm’s Carolyn Milburn.

“As it is unusual for a tenancy of this type to come on to the market, interest is expected to be high.” The tenancy is available on a term of three to five years as a whole or in two lots. Tenders must be submitted by 2 December 2009.