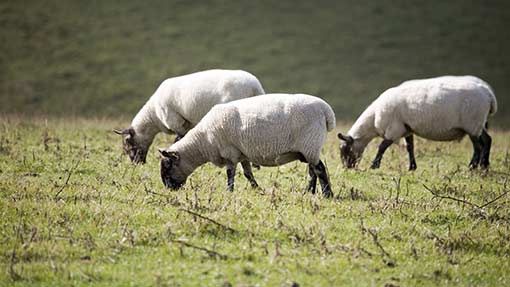 More than £2m is being invested into developing grasses that could help capture increased volumes of rainfall and reduce flooding risk downstream.


The five year £2.5mn LINK project named SUREROOT is funded by the BBSRC (Biotechnology and Biological Sciences Research Council), and match-funded by a range of industry partners. It aims to develop grasses that can help reduce surface runoff.


See also: How to assess your grassland after the recent heavy rain and floods


Many river catchments are upland grasslands predominating in the wettest areas of the UK, say scientists. They believe if the rates of surface run-off could be reduced and rainfall captured more effectively by grassland soils, then the worst impacts of heavy rainfall down-stream may be reduced.


Project leader Dr Mike Humphreys of Aberystwyth University’s Institute of Biological, Environmental and Rural Sciences (IBERS), said: “Festulolium, which are defined as natural hybrids between ryegrass and fescue species, are very much the grasses for the future. They are the way ahead for sustainable livestock agricultural practices.


“Festulolium grasses have well-developed root systems which combat flooding, reduce soil erosion and compaction and offer opportunities for significant carbon capture and storage at depth in soils,” he said.


The SUREROOT project will assess the efficiency and effectiveness of these and other new grasses, both for their agricultural production under a range of alternative livestock management systems and for their flood mitigation properties at different locations in the UK and at different scales.


Already research has found festulolium grass root-soil interactions instigated a change in soil structure leading to increased water retention with a 51% reduction in rainfall run-off compared with equivalent grasses that were grown alongside.


If the initial positive findings are replicated on a large scale, scientists believe this will point to a significant breakthrough in flood alleviation.