The 2017 Farmers Weekly Awards finalists have been announced and the judges have visited each of them for a three-hour interview and tour.

All three finalists are shining examples of profitable, family farms. They are all sustainable businesses making the most of their natural resources and have clear visions and goals for the future. Rhian Price reports.

The 2017 dairy farmer of the year finalists are: 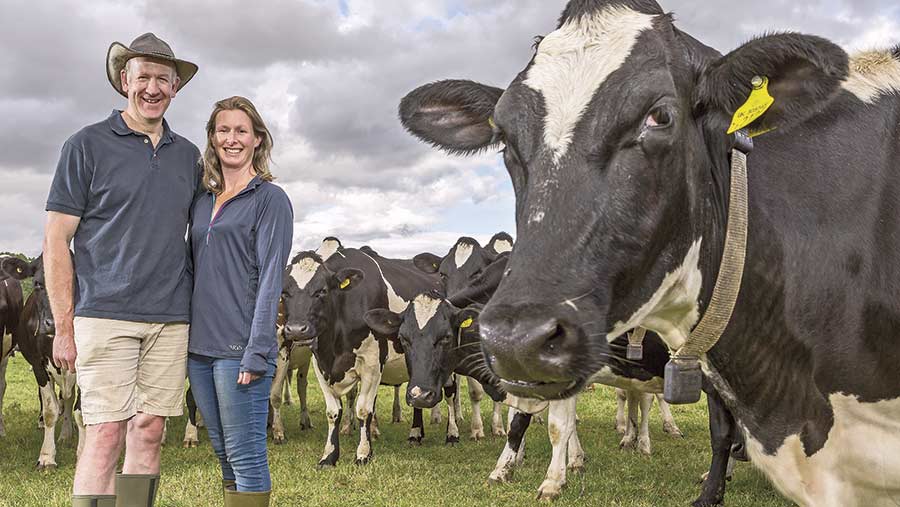 Organic champions Tim and Louise have grown their business exponentially in the past 12 months.

Having bought a new, 88ha unit they have increased cow numbers to 440 and soon hope to hit 500, split equally across their two Shropshire-based units. This will double their 2016 production to 2m litres.

Rather than chasing litres they are adding value to their produce by working closely with their buyers.

Through his involvement with Omsco’s board, Tim has helped develop a booming cheese export market to the US and has secured a premium for their Angus beef calves with Dovecote.

They are grasping new opportunities by keeping an open mind. Superb stockmanship and the adoption of homoeopathy is enabling the couple to run an antibiotics-free milking herd, which provides them with a 4p/litre premium on 60% of milk sold.

This, alongside using sexed semen on heifers, has helped them capitalise on selling surplus heifers this year, bringing in an extra 1p/litre.

Excellent grassland management is the beating heart of their organic system.

Cows are rotationally grazed in 12-hour shifts and over-seeding with multispecies leys has helped to boost grass quality and in turn, milk constituents and output, with yield from all forage making up almost three-quarters of total output.

Extensive soil sampling, aeration and conditioning using seaweed is helping them to grow 10t/ha of grass a year – no mean feat for a low-input system.

Tim is also deploying a wealth of digital data to inform daily decisions, including a grazing calculator app and EID tags to facilitate regular weigh ins.

Perhaps most impressive is the opportunities they are bestowing on young people. They are currently hosting their 17th gap year student.

Their herd’s manager Andy Farrow is a testament to their management skills. Having given him his first job after returning home from New Zealand, he is now running their new unit and alongside his wife Lianne.

Tim and Louise have created a robust business and have been pivotal in helping to establish new markets for organic produce by working closely with their milk buyer. They are also great mentors. 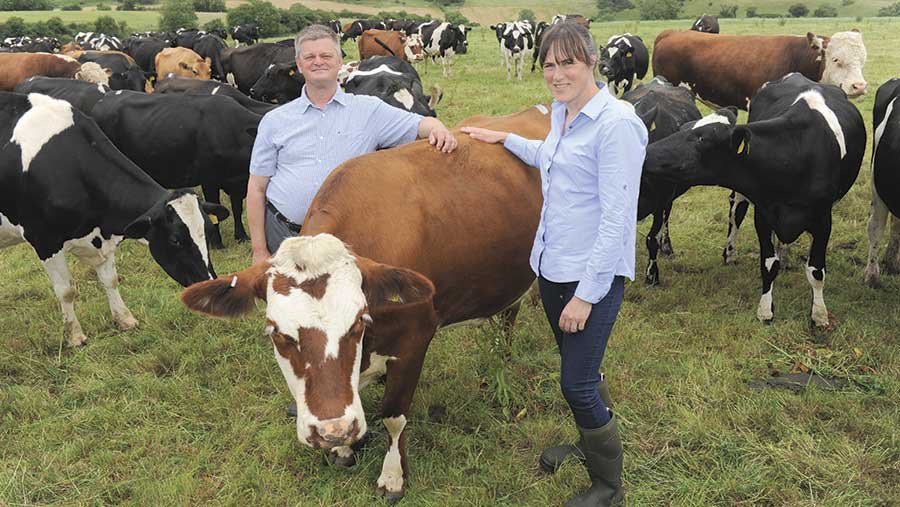 Through sheer grit, hard work and determination this formidable couple have overcome all odds to make a spectacular ascent up the farming ladder.

Building up a 450 flock of ewes while working full-time jobs allowed them to build up enough capital to get a foothold in dairy.

Gaining a tenancy on a small, 24.2ha Dorset county council farm in the late nineties paved the way for the dairy enterprise with the sheep sold to help finance the move.

Today, the couple have a herd of 147 cross-bred cows and acquired more land on different agreements to take the total to 104ha.

Neville says it’s fortuitous timing and their willingness to go against the grain that has been key in their success.

“We were getting into milk in 2000 when everyone else was getting out because the price was about 16-17p/litre,” adds Neville.

Although the couple lived on a “shoestring” to survive the first four to five years it did allow them to buy heifers cheap at about £350 a head.

“One of our biggest assets is we had nothing to lose.”

The couple transitioned to spring calving in 2011 to afford them a better work-life balance, phasing out their Holstein genetics.

“We wanted to make the business work for us. I was a volunteer police officer and I have seen enough to know that life changes rapidly and you don’t get second chances.”

Heifers are mated to easy calving, Jersey-cross bulls to calve at two and the cows are AI’d to New Zealand Friesian and Jersey bulls. After six weeks, a Hereford bull is run as a sweeper.

Alongside keeping heifer calves from the most fertile cows, this strict breeding policy is helping them to achieve 90% calving within the first six weeks.

They are driving down costs by exploiting their cheapest feed resource – good-quality grass, with cows paddock-grazed from February to November and outwintered on turnips and silage bales.

Meanwhile, young calves are reared outdoors until calving at two, which has helped slash heifer rearing costs from £1,200 to £780.

They have a clear vision for the future and are intent on building up enough capital to allow them to retire in 15 years and are already well on their way to achieving this.

This inspirational couple triumphed over adversity becoming a shining example of what new starters can achieve. They are run a small, but profitable dairy that could be a blueprint for most county council holdings. 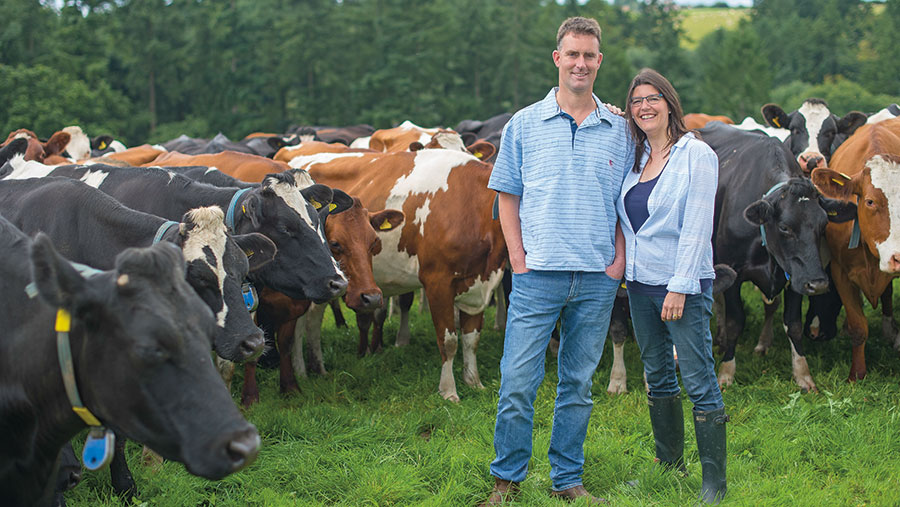 Running an organic dairy can be expensive, but keeping tight control on costs is helping Alan and Donna Webber run an enviable cost of production of 24p/litre.

Keeping things simple to minimise labour and machinery costs is a crucial part of their philosophy.

Alan is in charge of breeding the closed, autumn-calving herd of 230 three-way-cross cows and is using Friesians, Swedish Red and Montbeliards to maximise hybrid vigour.

Heats are detected using tail paint with cows AI’d for the first six weeks. To ensure high levels of fertility Alan is selecting heifer replacements born from cows which hold to the first service.

And it’s only set to improve.

“This year all the dairy heifer calves will be born in the first three weeks of breeding.”

The herd is yielding an impressive 480kg milk solids a cow a year with quality forage acting as the primary diet source.

Milk is produced entirely from grass during the spring (from turnout in February) and summer, with cows paddock-grazed on clover rich grass leys. About 15% of the farm’s grazing platform is formed from steep ground.

Unable to plough these fields safely they are using a three-in-one rotavator, air seeder and roller to reseed these blocks. The 76ha grazing platform is now growing 8t/ha of grass – about 90% of its original pre-organic output.

In an attempt to improve lifestyle balance and save labour they drop back to once-a-day milking come August.

Cows are housed by fully by the middle of November in cubicles and fed home-grown silage in bunkers alongside cake in out of parlour feeders.

No antibiotics are used at drying off. Instead, cows receive teat sealant only and 50ml of cider vinegar is added to the drinking water.

Alan believes this, alongside the frequent application of udder mint, is helping keep mastitis rates low at 22 cases across the whole herd.

Alan’s excellent stockmanship and breeding policy and Donna’s attention to detail when it comes to the farm’s accounts makes for an unstoppable partnership.

“Given the difficult circumstances recently it is inspiring to see such fantastic businesses prospering and inspiring the industry – encouraging others to continue to strive for excellence – these are our values and as such Safety Revolution is proud to be sponsoring this category and supporting the dairy sector as a whole.”