This year finalists represent a diverse set of enterprises in the egg sector. But what unites them is focus on innovative management, high animal welfare and a solid understanding of their market.

The 2017 Poultry Farmer of the Year finalists are: 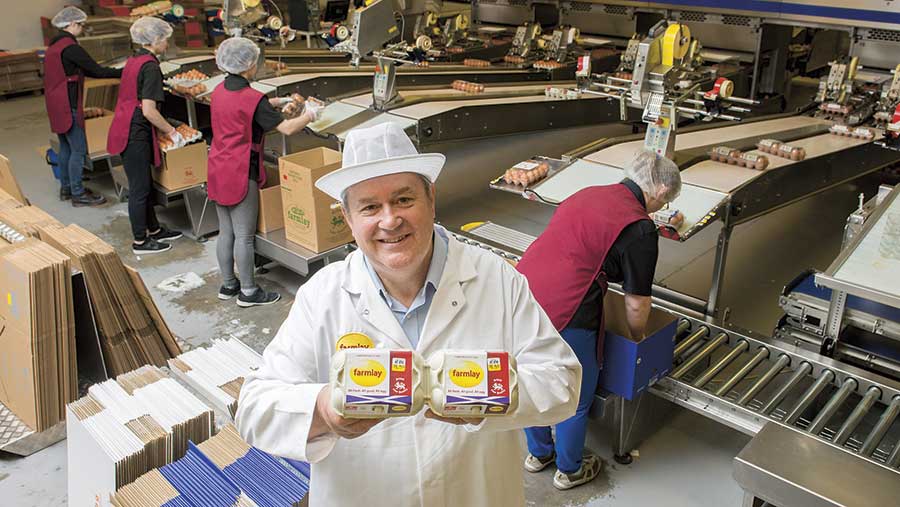 There is a distinct sense of pride in the business that Robert Chapman, his wife Ethel and, more recently, their son Iain oversee.

A family farm that has grown into a major supplier of Scottish eggs to supermarkets, with three generations behind it (and a fourth on the way), quality, straightforward marketing and service are the watchwords of how the outfit operates.

It wasn’t always so simple. The business has had to adapt from a supplier to small shops across Aberdeenshire and beyond to one that deals with millions of eggs going to multiple retailers.

“The aim is to provide a Scottish product, sold to the Scottish marketplace while maintaining the high levels of quality that customers have come to expect,” says Robert.

Recent growth has allowed a major investment in Farmlay’s packing station, led by son Iain. “I’m a big believer in delegation,” explains Robert, who will eventually hand over the reins.

Iain has overseen the £3.5m investment in mechanising the process of egg grading further and has introduced a number of innovations along the way.

Where previously fibre trays were used to store eggs, now washable pallets save both money and are better for the environment. A wind turbine helps power the plant and biomass is used to help rear the chicks before they come in to lay.

As Robert and Ethel reflect on a career that has seen a farm grow into a successful major supplier of Scottish eggs, they look to the next generation and to growing the team of loyal staff that run the business.

Many, such as the general manager, began as weekend egg collectors before taking on more responsibility and training.

Fresh faces are also actively being brought into the business to help with marketing, for example, and Robert is very keen to encourage new entrants into free-range poultry farming to supply Farmlay.

For production, growth in organic eggs, as well as continued expansion in free-range and possibly barn eggs in the coming years, present new challenges for the farm.

But Robert is optimistic for continued growth of the family business.

“We feel that our very personal service to our customers, our continuing dedication to bird welfare, advanced production techniques and our strong Scottish Farmlay brand has been at the core of our success and will continue to be in what we hope will be a very bright future.”

What the judges liked:

Farmlay has been in the poultry sector since 1946 – as a business it has seen it all and weathered many storms. With a solid succession plan in place, it has shown astonishing growth over the past decade. 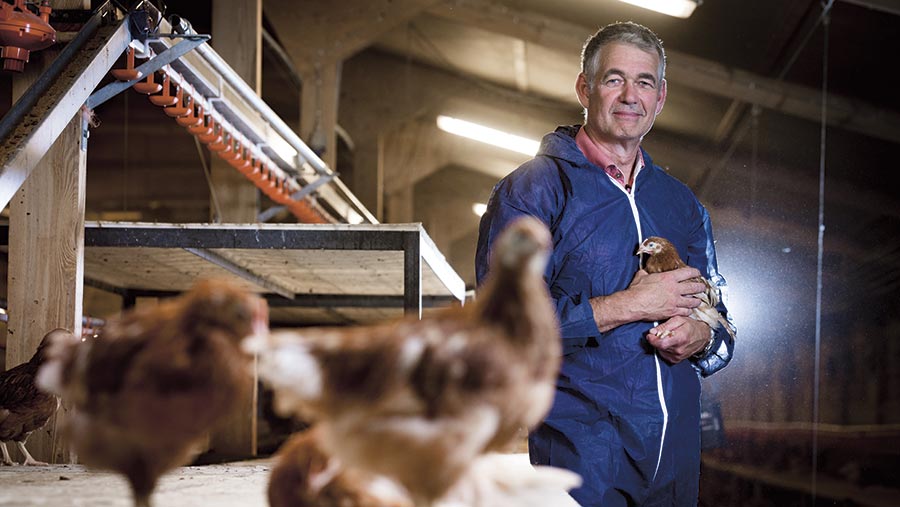 While a single point-of-lay pullet priced at about £4 may not seem like a huge investment, for someone keeping 32,000 hens it quickly adds up to a tidy sum.

Yet, as most poultry farmers will explain, pullet rearing has historically been overlooked, despite the focus on in-lay birds.

Often housing is older and with no tangible produce, such as meat or eggs, there can be less focus on performance.

That’s why Matthew Green and business partner Jim Bloom decided to begin rearing hens, initially for their own farms in 2004.

A surplus quickly developed and Wot-A-Pullet was born. The business has grown from nothing a little over 10 years ago to being in a position where it expects to rear five million birds this year.

Matthew puts Wot-A-Pullet’s success down to a focus on quality, service and rearing birds under the best conditions.

Sheds employed for the task are solid, often ex-Cherry Valley units, kept immaculate and in the main served by biomass boilers, which produces a dry, clean heat for chicks in-rear.

All chicks are encouraged from an early age to jump up and perch on tables provided, with the aim being to get them used to multi-tier systems when they are moved to the laying farm.

Staff are dedicated to single sites and there are no farms contracted out: “We want people 100% focused on the chicks,” explains Matthew, “not worrying about harvest or anything else.”

Biosecurity, the best defence against disease, is more akin to a broiler farm than a laying unit, and customers are offered a weekly report on the performance of their flock as it progresses to time for transfer to the laying farm.

It’s an exciting time at the farm business, with plans to further improve reporting, gathering more data from the rearing farm and offering it to customers in real time.

The management team has also grown, with a new MD taking on the corporate side of the business and an experienced technical director overseeing the farming operation. Another element that bodes well for the future is the average age of staff – just 39 (the national average for farming is close to 60).

Finally, a new venture is in the early stages that will see Wot-A-Pullet expanding its free-range egg production further by renting land from farmers seeking to diversify.

Matthew – and the team he employs – has a steely focus on getting hens off to the best start, and the resulting point-of-lay pullets speak volumes about the care and attention to detail he employs in rearing them. 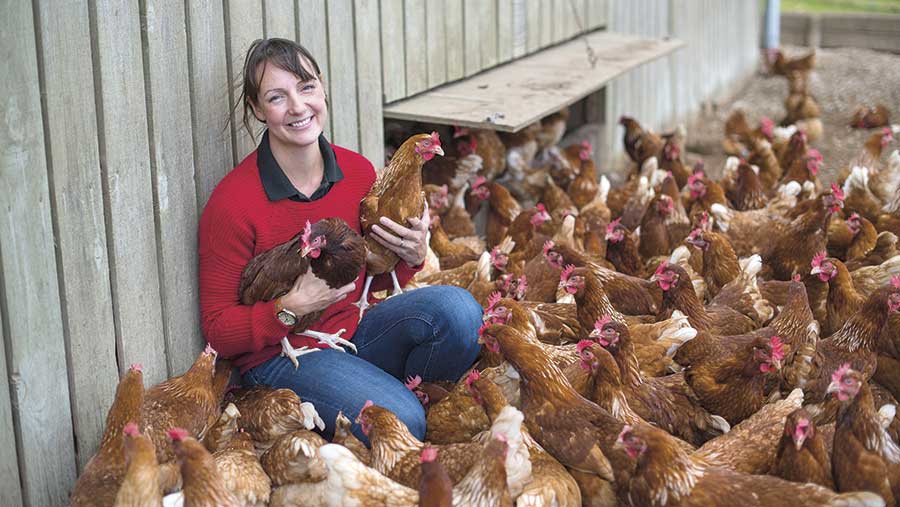 Geography, logistics and the need to stand out in a crowded market all make the success enjoyed by St Ewe Free Range Eggs remarkable.

Tucked away in Cornwall, Rebecca Tonks’s farm is fewer than 50 miles from Land’s End, and the entire region is riddled with ancient country lanes – hardly ideal for a business that relies on regular egg collections and delivery to distribution centres.

The marketing options are, on the face of it, limited. Either sign up to a major egg packer or develop a regional brand and rely on wits to build contracts with local businesses.

Rebecca and her family decided the farm would be better served taking the latter option, selling eggs themselves, and to date they have recruited six other farms nearby to help with supply – a decision common to many larger farms across the country.

What makes St Ewe’s free-range egg stand out is the innovation driven through the business, as well as the success in punching above its weight in winning regional retail contracts, testament to Rebecca’s enthusiastic approach to sales.

Three years ago, the business became the first in the UK to sell selenium- and omega-3-enriched eggs.

The latest project is an egg pasteuriser – something unprecedented for a business of St Ewe’s scale: normally this sort of equipment is the preserve of companies that buy a low-cost egg, process it and then sell with absolute price focus.

Rebecca hopes to supply a liquid egg that can offer cafes, restaurants and other businesses a local, assured product in manageable quantities.

Another ambition is to use the eggs to produce branded cakes. But, fundamentally, having a new market for their produce reduces exposure to the often volatile shell-egg market, where smaller packers can be at the mercy of supermarkets.

Running alongside this exciting project is general expansion, with staff, largely local to the region, learning skills beyond basic farm labour – egg processing is a highly technical endeavour.

Schoolchildren are a regular sight on the farm and Rebecca is active in a number of local food and drink organisations.

As the business grows beyond its roots as a small Cornwall family farm, it is holding on to the ethos under which it has always operated: community engagement, healthy food and strong values.

Rebecca and her family have transformed their farm into a regional egg packer that has pioneered enriching eggs’ nutritional value and is now investing in pasteurisation.
See more
Share this
Advertisements