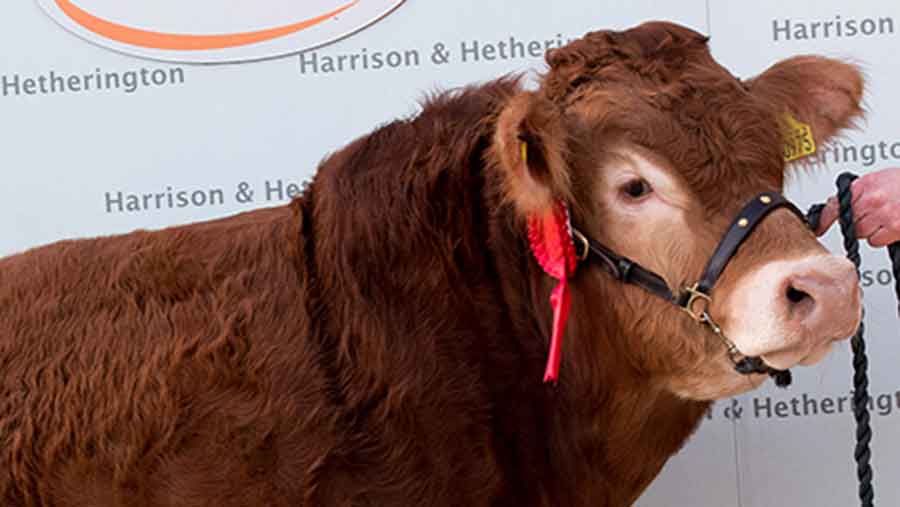 A phenomenal day’s trading for the Graham herd saw calls of 38,000gns, 25,000gns and 20,000gns at the Limousin Society’s Red Ladies Show and Sale at Carlisle on Friday (8 December).

The Grahams trio of a heifer calf, heifer and bull was the highlight of five lots consigned by Robert and Jean Graham, Bridge of Allan, Stirling, which grossed £102,900 overall.

This helped push averages up £1,657 on the year to a sale record of £3,987 as eight animals sold for five figures.

Topping the trade was the record-breaking weaned calf Grahams Natalie, which almost trebled last year’s 10,500gns record when it knocked down to the Wilodge herd, Shifnal, Shropshire, for 38,000gns.

Natalie is out of the prolific cow, Grahams Coffee, and sister of Grahams Lilly, which topped last year’s sale with a price tag of 32,000gns. She is by Claragh Franco, a Wilodge Vantastic son, which has a beef value of +37 at 98% reliability.

Also from the Grahams was the Red Ladies Supreme Champion, Grahams Malibu, at 25,000gns, knocked down to the Nugent herd on the Nugent Estate, Portaferry, Co Down.

Grahams Malibu sold to the Nugent Estate, Co Down, for 25,000gns. © Wayne Hutchinson

She is a full sister to the 22,000gns Grahams Michael and by Ampertaine Elgin and out of Milbrook Gingerspice. Among her attributes for judge Kim Montgomery were a great carcass and a very correct heifer full of breed character.

Next from the Grahams was weaned bull calf Grahams Nashville at 20,000gns, which sold to PM and L Harris and Son of the Saltbrook herd, Ashbourne, Derbyshire. He is out of Grahams Coffee and by Claragh Franco.

A weaned bull calf made 20,000gns for the Grahams herd. Grahams Nashville knocked down to the Derbyshire-based Saltbrook herd. © Wayne Hutchinson

The Saltbrook herd also snapped up stylish maiden heifer Aultside Mystique for 18,000gns from Garry Patterson, Aultmore, Keith. She is a Wilodge Ceberus daughter out of Hargill Blaze daughter Spittalton Flush and is a full sister to the 55,000gns Aultside Hulk.

The Saltbrook herd was back in the bidding to snap up Wilodge Ceberus daughter Aultside Mystique for 18,000gns. © Wayne Hutchinson

Next at 15,000gns was Glenrock Northernstar from SD Illingworth, Eaglesfield, Lockerbie, which knocked down to W Corrie of the Drumhilla herd, Newtownards, Co Down.

She is a March 2017-born heifer out of Glenrock Fantastic and by Haltcliffe Doctor. Her grand dam is the prestigious Glenrock Spangle.

At 12,000gns was a May 2017-born Kedzlie Farms heifer, which was bought by Gary Bell, Lockerbie, for his Haassidefarm pedigree herd. Swalesmoor Nessa from Kedzlie Farm, Blainsie, Lauderdale, is by the 35,000gns Foxhillfarm Jasper and out of the 125,000gns world record-breaking maiden heifer Glenrock Illusion.

An 11,000gns call for Wilodge Vantastic daughter Millbrow Misty from George and Pat Long, Ambleside, Cumbria, came from SW Jones for his Perth herd, Pentir, Bangor. She is out of one the herd’s best cows Millbrow Tricia.

The Grahams were back in the money selling September 2016-born heifer for 10,000gns to R and A White and Son, Bamford, Hope Valley. Grahams Marjorie is by Ampertaine Foreman and out of Wilodge Flawless daughter Poolehall Isabella.