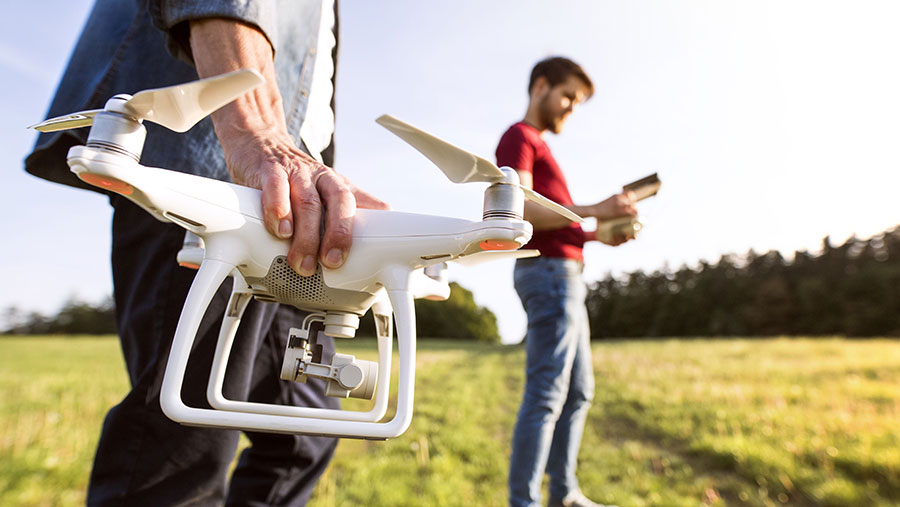 Farming has come a long way since the days of horse and plough.

A raft of new technology is already being deployed on many UK farms helping improve labour efficiencies, gives insights into animal health and behaviour and make better use of inputs.

However, there are new and exciting developments being made which could further change the way we farm.

Farmers Weekly takes a look at four new technologies on the horizon.

See also: How a dairy farmer saved £60,000 in mastitis control

Fencing may be one of the oldest management tools for controlling livestock movement and access to pasture, but it seems it could have finally had its day.

“The problem with physical fences is they take flexibility out of grazing,” she says. “The invention of electronic fencing in the 1930s gave farmers some flexibility but it’s still not enough: Virtual fencing is where we need to go.”

To date, virtual fencing prototypes have relied on GPS technology which keep animals in a defined area thanks to an animal-mounted device which delivers a shock or noise to keep livestock away from an area.

However, research has shown cattle respond best to visual and audio cues, says Dr Umstatter, which is why she is investing in systems which teach cows to recognise coloured flags or lights indicating when they can move to fresh pasture.

As part of that work, Dr Umstatter is designing a cybernetic grazing management system which measures grass height via animal-mounted collars.

That information is geo-referenced and sent to a phone where it can then calculate the grazing allocation.

It will measure the grass, send calculated pasture perimeters to the cow, and then give them time to move to the area. It will then have a feedback system that reports back on feeding allocation.

2. Hill farming from the skies with drones

Drones may have long been the focus of tech-loving arable farmers but the technology could be adapted to have greater use for hill farmers, according to Harper Adams University (HAU) professor of animal behaviour Mark Rutter.

“Drones offer a variety of potential,” he says. “In the future, they could be used to locate and identify animals or monitor grass use.

“Could we even teach animals to follow a drone if they learn they will get a reward, will we even see a hands-free herd? There’s a lot of scope, and it’s an approach that’s worth investigating further.”

While the costs of drones and other precision technologies have been a barrier for investment for many hill farmers to date, Prof Rutter thinks the potential environmental benefits they offer mean subsidised systems could be introduced in future.

It’s a management tool that should bring financial benefit, but it could also monitor compliance with schemes.

Some 70% of grassland soils in the UK have some kind of compaction, while up to 12% are deemed to be in a poor to very poor condition.

For livestock farmers, those numbers represent a serious problem. Reduced drainage, limited microbial activity and other factors mean compaction reduces grassland yields by an average of 13%.

The solution, according to scientists at SRUC and HAU, lies in giving soils the chance to regenerate by using controlled-traffic farming (CTF).

In a study, they found CTF technology – with fixed wheelings, GPS and visual markers to ensure tramlines were used each time – could lift yields by more than 10% after three cuts.

What’s more, the results showed significant improvements could be achieved even if farmers opted for low-accuracy guidance systems to help limit traffic, meaning CTF in grass silage production can be cost-effective.

Urine can add up to 10 times the amount of nutrients farmers would ordinarily add to grass for pasture growth, so understanding the impact of where cattle urinate is important.

By applying additional nutrients on urine patches, you can enhance ammonia emissions, nitrous oxide and leaching – environmental problems agriculture has to challenge, says Bob Rees, professor of agriculture and climate change at SRUC.

To tackle the issue, Prof Rees and his team are investigating how drones can map out the distribution of urine patches on a field.

By collecting high-quality images of pasture, they calculate the proportion of the field the patches occupy and then help farmers adjust their application of fertilisers.

“The technology is still in its infancy, but it’s an exciting time,” he adds. “It’s a case of watching this space.”