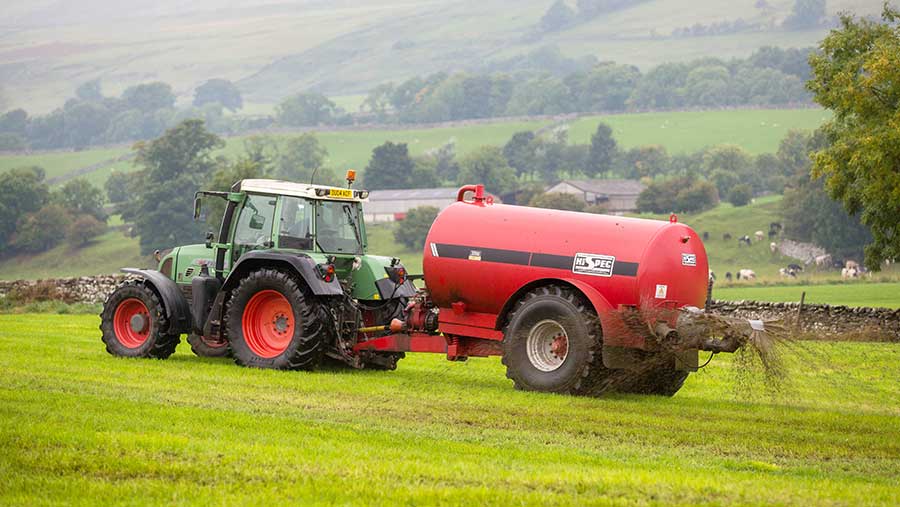 Understanding the soil and the nutrient value of organic manure is vital when formulating a nutrient management plan.

Farmers wishing to maximise crop yield potentials, while also streamlining costs should look at formulating a nutrient management plan before buying any fertiliser.

John Williams, principal soil scientist at ADAS, says if you are using nutrients produced on the farm effectively you can not only save money on purchased fertiliser, but you can produce optimum crop yields while also protecting the environment.

“It’s important to understand organic manures and what they can offer. They are a great source of nutrients,” he says.

Before applying anything to the land, it’s important to know what’s in the soil by conducting a soil analysis. “Farmers should look at analysing soil every five years,” says Mr Williams. “If the pH of the soil is wrong, this controls the chemistry of the other nutrients in the soil,” he adds.

Soils with a potash and phosphate level of 0 or 1 need their levels building, at index two then it is a case of maintaining levels and at three they are fine.
“There’s no need to apply a fertiliser containing potash and phosphate if you have levels at 2 or above,” he says.

Once you know what your soil needs, then it’s about understanding the crop requirements. This can be done by using using a fertiliser recommendation system, such as the free AHDB RB209, (including latest amendments) or in Scotland, the Scottish Technical Notes.

“These resources will tell you how much fertiliser you should be applying for the different types of crops,” says Williams.

Once you know the nutrient needs of individual crops, then you need to work out how you are going to meet those needs.

Organic manure is a very important source of nutrients. However, there’s no typical type of slurry, warns Mr Williams.

“The type of feed will determine the nutrient content of manure as will rainfall, as it will dilute it. RB209 is a good starting point to give you ballpark figures for livestock manures and also digestates.”

Farmers can take slurry samples to give them a more accurate idea of the nutrient quality of the slurry but the samples must be representative of what’s going onto the land.

For example, in a slurry lagoon there’s crusty bits, “so it’s important”, says Mr Williams, “to mix prior to samples being taken and also before slurry is spread, so it is a uniform and homogenous product.” 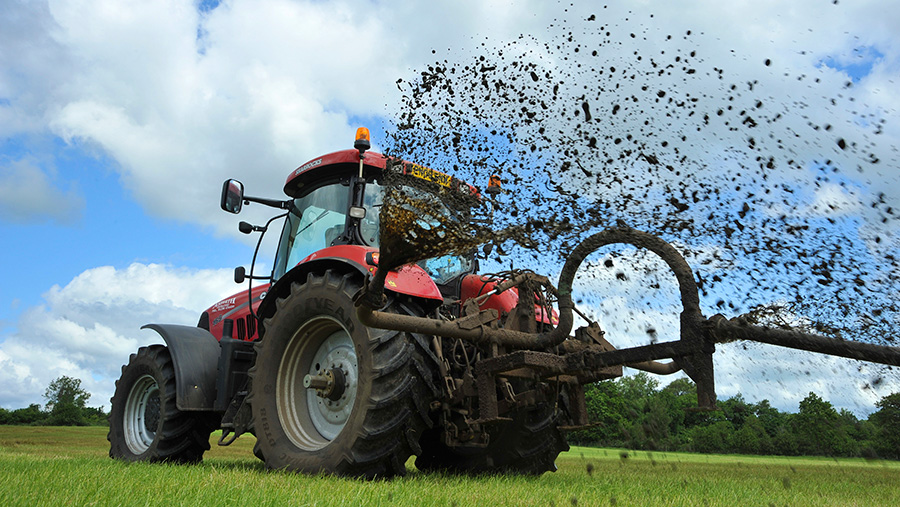 It’s also important to understand application rates of slurry and solid manure. Slurries are easier to manage as a lot of umbilical application systems have flow meters, but for solid manure it’s harder because of the density of the material.

Mr Williams says if the spreader doesn’t have weigh cells, then when applying solid manures, run the spreader over a weigh bridge before filling up, so you can then quantify how much is being spread on the field with a machine.

Step 4 Understanding how much bagged fertiliser you need

Once you have accounted for how much nutrients are in manures, then farmers should use the free RB209 and Manner NPK decision support to help them predict how much nutrient supply is available from manure application.

For example, 35t/ha of pig muck for a spring application will supply:

“With these figures you would only need to top up with nitrogen,” says Mr Williams.

“Once you know the nutrient supply from the manure and minus the crop nutrient requirement figure, that will tell you what bagged fertiliser you need,” says Mr Williams.

Applying what you need

Dairy and Beef farmer Ashley Masters, who farms 140ha at Keybridge Farm, Cornwall, says he used to view slurry as a waste product, but now views it as a “pit of nutrients”.

Only after installing a new dairy 10 years ago, and increasing the amount of slurry storage on the farm, did he realise the true value of slurry: “Before the new dairy we were just spreading slurry to get it used, now we view it as a pit of nutrients.”

He reckons he has saved 30-40% of fertiliser costs by just applying what is needed. He applies 110 units/acre of N for first cut silage.

“In winter, the slurry is more diluted from the rainfall, whereas in summer it has a higher nutrient content as it’s not so diluted,” he says.

He uses RB209 as a reference point to formulate what needs to be applied.

He says 10 years ago they were applying a combined fertiliser. “Not only were we applying nutrients we didn’t need, but we were applying more potash than was needed, which was locking up magnesium in the soil.”

As a result, Mr Masters says he was seeing quite a few cases of milk fever. “By now having the required potash levels and also feeding differently in the dry period, milk fever has been greatly diminished,” he adds.

He continues: “Margins aren’t there just to apply combined fertiliser, why apply if you don’t need it.”

Since soil testing, he has not purchased phosphate for seven years. “We are now just buying straight nitrogen and potash to top up.”

The soil at Keybridge Farm has a good pH as cows are bedded on Cornish sea sand. Solids are cleaned out in August/September and applied to the land.

“The pH of the soil will determine where we spread the solid matter. It tends to be away from the farm and on the land where multiple cuts of silage have been taken.”

Mr Masters has enough storage for up to 2.5 months. In the winter slurry is applied to land using an umbilical system, which helps gives an early bite of grass. Mr Masters isn’t in an NVZ, but borders a site of special scientific interest.

2. Know what’s already in the soil

3. Know the nutrient value of organic manure and slurry

4. Use decision support tool such as RB209/ Manner to work out what additional fertiliser you need