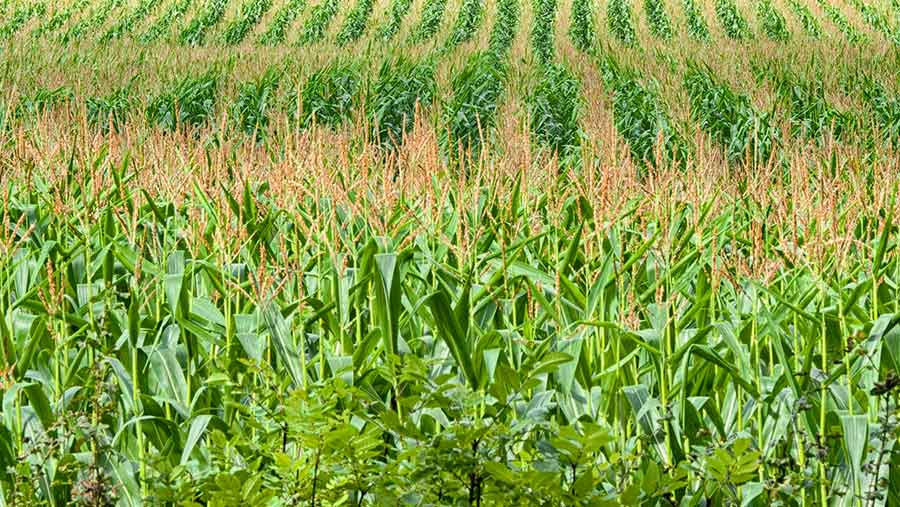 Maize can be a challenging crop to grow, and selecting the right variety is key to maximising feed value.

Forage maize has become an extremely important component in winter livestock diets. But with more than 50 varieties on the first and second British Society of Plant Breeders 2018 Forage Maize Descriptive Lists (DL), what steps should growers be taking when making their choice?

Below, Charlotte Cunningham speaks to three maize advisers to get advice on site and variety selection.

Growers should be aiming to achieve 30-35% dry matter and at least 30% starch in the clamp. Did the previous year’s variety deliver on expectations? From this, growers can plan whether to use the variety again or look for something different.

However, it is also important not to have a knee-jerk reaction based on the previous year, warns Mr Richmond.

“For example, 2015 was a very wet year, resulting in less mature maize at harvest, so many people grew earlier types in 2016 – which turned out to be warmer, with crops maturing earlier than people expected. Consequently, many got caught out and harvested at too high dry matters.”

While breeding developments have made it possible to grow maize across much of the UK, farm location, soil type and field aspect all influence the productivity of a crop.

Heat is key to a maize plant reaching maturity, so the site will influence variety selection, explains John Morgan, independent consultant at the Maize Growers Association.

“We encourage growers to consider the soil type, altitude, aspect and slope of their fields. The important thing with maize is to ensure it will mature at a reasonable time of year.”

The MGA uses a site selection tool that enables farmers to score the suitability of individual fields for maize production, with the score relating directly to the maturity class of a variety, adds Mr Morgan.

“In addition, target drilling dates, harvest timing and location are considered when generating a field score.”

Scores range from 6-7 on favourable sites to 12 on more challenging fields. “Farmers with a field score higher than 12 are encouraged to consider using degradable film to speed up maturity or alternative crops, in recognition of the risks of growing maize on such sites.”

Early maturing varieties are a good option for marginal parts of the UK, where crops are likely to be more exposed to poor weather, says Dr Joanna Matthews, forage crop specialist at Niab.

“It’s very important to look at varieties with early vigour and ones that would cope with challenging circumstances.”

There is more flexibility with favourable sites. However, it’s vital to match varieties with predicted drilling and harvest dates, to ensure the variety can mature in this time, she adds.

Quality requirements from a maize crop will vary according to the individual farm and ration targets, says Mr Richmond. “Yield potential is obviously something that a lot of growers will be looking at. However, it’s equally important to consider starch levels and digestibility.”

While 100% of starch in the cob is digestible, it’s also important to think about how much nutrition can be derived from the rest of the plant – indicated by cell wall digestibility (CWD).

Cell walls make up a large part of the maize plant structure and the quality is very influential in diets with high maize content. The higher the cell wall digestibility, the greater the availability of nutrients – with potentially increased feed intakes as well.

Although there is only a 5% variation between the highest and lowest CWD, having a higher digestibility in the ration can make a huge difference, says Mr Richmond.

“In dairy cow diets with more than 50% maize in the ration, a 4% higher digestibility can mean an extra half a litre of milk per day. When multiplied across the lactation and across the herd, there is a lot to be gained. The more farmers can get out of forage, the less reliance there is on expensive purchased feeds.”

In terms of energy requirements, high maize rations should have a metabolisable energy (ME) of at least 11.5MJ/kg dry matter to meet animal demands, explains Mr Richmond.

“The average ME on the Niab list is 11.3MJ/kg dry matter – farmers should be choosing above-average types to maximise feed efficiency.”

While most varieties provide enough starch in rations with a high percentage of maize, for diets with less than 50% maize a focus on starch is recommended, says Mr Morgan.

Though many growers look to later maturing varieties to improve yields, this can have an adverse effect on crucial starch levels, warns Mr Richmond.

“If you are chasing yields by using later varieties, you could be compromising crop maturity and starch levels – so it is important to bear this in mind.”

4. Weigh up the disease risk

Maize doesn’t suffer from many diseases, but growers need to be aware of any likely threats, influenced by location and variety choice. There are two key diseases to be aware of: eyespot and fusarium.

Mr Richmond explains: “Farmers in coastal areas need to be particularly aware of eyespot. A wet, cloudy summer causes higher levels of dampness in the air – causing eyespot infection levels to proliferate – and can go through crops in weeks, with potential losses of up to 50%.

Fusarium, on the other hand, can lead to premature death, both reducing the digestibility of the plant and preventing any further accumulation of nutrients.”

While fusarium ratings are not included in the DL, eyespot ratings are available, says Mr Morgan. “When selecting varieties, those with good eyespot resistance should be chosen by growers in areas where this is a potential threat.”

Even with the best variety choice, it’s important to cover all the basics to grow a valuable crop. “Excellent seed bed establishment and careful seed drilling is essential for getting the best out of a maize crop,” explains Mr Morgan.

Heavy, wet soils take longer to warm up in the spring – effectively shortening the growing season and creating the potential for harvesting issues in the autumn.

At the opposite end of the spectrum, lighter soils, if left capped and exposed, can increase the risk of erosion. “Maize is best grown on fields with a low risk of soil run-off and compaction,” Mr Morgan adds.

When establishing the all-important seed bed, it’s crucial to remove any compaction and ensure soil analysis is carried out. “Target a soil pH of 6 and P and K indices of 2 – it is important to rectify any issues prior to drilling for maize to be at its most productive.

With such significant money spent on maize establishment and seed, there is a risk that the cost per tonne will be compromised if these areas aren’t addressed.”

With so many varieties out there, which ones give growers the best chance of producing a valuable feed crop? Dr Joanna Matthews chooses some of the best varieties on the BSPB 2018 forage maize DL.

“The varieties I have selected span a range of maturity and are a balance of yield performance and quality attributes of starch, ME and digestible stover (everything apart from the cob),” she says.

“On favourable sites, Glory provides an all-round performance of yield, starch and digestible stover – creating a potentially high-value feedstock. Rodriguez boasts one of the highest yields on the DL and has excellent starch levels.

“On less favourable sites, Rubiera is an early maturing variety which maintains very good yields as well as excellent quality characteristics, while Ambition has very good yield potential combined with high starch levels and ME content.”