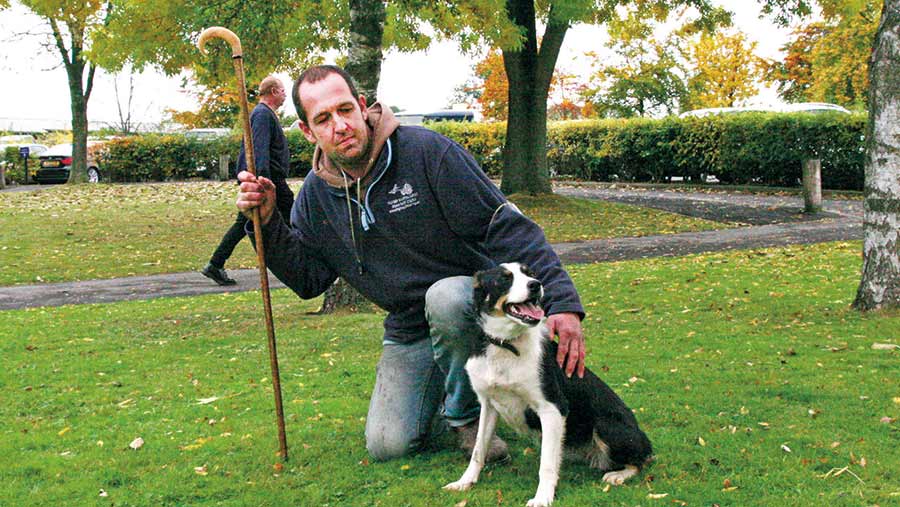 First up at 5,700gns was the two-year-old tri-coloured dog Braehead Sid, by another renowned Sid, bred by James McGee, Ballybofey. Out of Killiebrae Briar, bred in Cumbria by Derek Scrimgeour, he found a new home with an East Anglia-based working shepherd.

Mr White made his second appearance on the trials field with Jill, a two-year-old red and white bitch. She is by Michael Hynes’s Knockmaa Jack, out of Meg, from Michael Hastings. Jill sold to Norwegian handler John Gerhard Haakull for 4,500gns.

Next up was the 22-month-old tri-coloured bitch, Fly, by Aled Owen’s 2015 international champion, Cap, out of Welsh breeder Peter Blain’s Floss. She sold for 2,700gns.

The fourth and youngest dog was the 14-month-old black and white Monty. He is by James McCloskey’s Sweep, out of JH Herdman’s Fly. He sold for 2,200gns to Richard Westall, Lancashire.

Ireland was in the limelight again when James McCloskey, of Carndonagh on the Inishowen peninsula in County Donegal, achieved 5,000gns with his November 2013-born black and white dog, Kinloch Kai, by Kevin Evans’s Jimmy, out of Angie Driscoll’s Kinloch Penny.

Kai is already proven on the trials field and since completing his nurseries in 2015 and 2016 has amassed 65 open points. The dog, which achieved the vendor’s highest-ever price at Skipton, was purchased anonymously on behalf of a North American buyer

Nell fell to County Antrim’s Kieran McFadden, buying on behalf of fellow Country Antrim sheep farmer Seamus O’Keane, of Carnlough, and will be put to work on his 2,000-strong Blue Faced Leicester and Mule flocks.

A second 4,300gns dog was the very last of the 100 broken dogs entered to take to the trials field. Bill, a two-year-old black and white dog from Ireland’s Robert McKee, of Kilkeel, County Down, is extremely well bred, being by former One Man and His Dog champion, John Maggin’s Irish team dog Mozz, out of H McKee’s Meg, herself a product of Tom Lawrenson’s Spot.

The buyer was Bob Wilden, a sheep farmer from Bramford, near Ipswich in Suffolk. Bill will be put to work on his flock of pure-bred Lleyns.

Two dogs sold at 4,200gns. First up was the four-year-old tri-coloured bitch Fly, from Irish breeder Colm Doherty, of Quigley’s Point, County Donegal. The dog has already performed with great distinction on the trials field, including finishing fifth in the North of Ireland nursery final and also with two open wins to her credit.

Fly is fully Irish-bred by Mr Doherty’s own multiple trials winner, Dan, a half brother to James McGee’s Becca, out of Padraig Doherty’s Queen. The buyer was well-known Beltex sheep breeder Andrew John Wood, of Whittingham, Preston. He said: “It’s a cracking dog – I am well suited. I told it to sit and it was still there an hour later!”

The second 4,200gns dog, another Welsh entry, was the March 2014-born black and white bitch, Pentwyncock Bonnie, from Brecon’s Sophie Holt, who has been handling dogs for 10 years and who represented the Welsh team for the first time in this year’s International.

Bred in South Wales by Mike Hall (by his Tom, out of Cass), Bonnie – she also claimed the highest price ever achieved by Sophie –  has been used as a work dog on Welsh hill Cheviots and will continue to prove her worth with her new owner, Scottish shepherd K Donald, of Dalrymple in Ayrshire.

Nigel Watkins, who described Skipton as “the best sale there is to come for dogs – there is nothing like it,” also went to 3,800gns to secure another well-bred almost fully broken 10-month-old black and white dog, Spot, on behalf of a customer in Wales. He was sold by another Irishman, J Hamilton, of Glenarm in County Antrim, and is by B McAllister’s Spot, out of A McKeegan’s Meg.

Also selling well at 3,600gns was Skye, a three-year-old tri-coloured bitch from Colin Wilson, of Grange-over-Sands on Morecambe Bay. By AD Scrimgeour’s Mirk, out of ST Birkett’s Jess, Sky returned to Lancashire with N Brown, of Caton, Lancaster.

Regular Skipton top-price achiever Shaun Richards, who runs Pen-y-Borough Sheep Dogs in Eldroth, above Settle, hit 3,000gns with his two-year-old black and white bitch, Mist, who was bred in Lancashire by Jim Cropper’s Black, out of Eli Tattersall’s Gwen. Bought as a pup and trained on by the well-known handler, the dog found a new home north of the border in South Lanarkshire with Strathaven’s Alan Nielson.