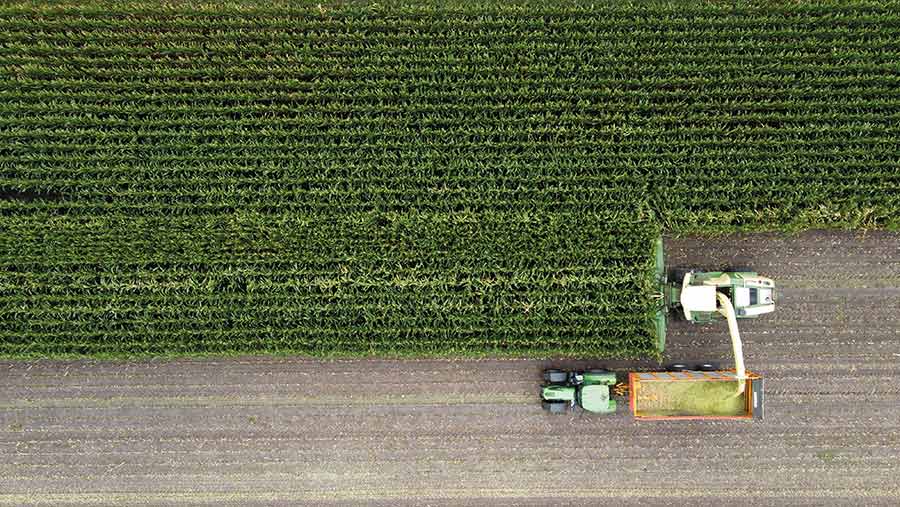 Results from a new survey of maize growers have revealed valuable cropping knowledge which can be shared to help livestock producers get more from their crop.

Nearly 100 producers, with a total of about 24,000 dairy and beef animals, took part in the survey.

It was the first to be carried out by the Maize Growers Association (MGA), British Grassland Society and forage specialist Grainseed since 2016.

See also: Advice on growing maize under film, plus the costs

In previous surveys, the main reason given for growing maize was to increase the energy of livestock rations, says Neil Groom of Grainseed.

This time it was crop reliability and better use of farmyard manure and slurry.

While maize area has increased, 24% of respondents reported growing less grass than they did five years ago, he says.

“There are obviously more people growing maize for anaerobic digesters (AD) and that has to be taken into account.

“But the general trend is for livestock producers to rely more on maize following some very difficult seasons for grass growth and silage-making.

Below, Jon Myhill of the MGA talks through some of the main findings and offers management tips and advice for getting more from the expanding UK maize area.

Findings: 69% of growers say ploughing followed by cultivation is their seed-bed preparation method of choice, with only 8% using minimum tillage. More than half (52%) of growers subsoil regularly to reduce compaction.

2. Optimise the use of farmyard manure (FYM) and slurry

Findings: 52% of growers say better use of FYM/slurry is the biggest advantage of maize.

Findings: 67% of growers always use a starter fertiliser, with a further 7% saying they use one sometimes.

Findings: Out of the 52% of growers saying climate change is a key management issue, 62% said summer droughts are their biggest problem.

6. Make better use of cover crops

Findings: Growing cover crops is a post-harvest management practice for 28% of farmers.