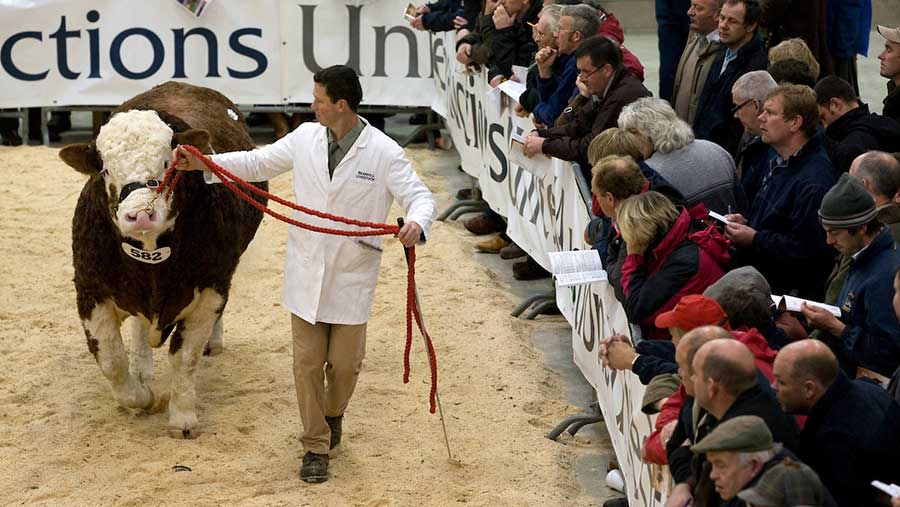 Buying a bull can be a relatively straight-forward process, but making sure that bull gets cows in calf in a compact breeding season for several years is more difficult.

There are a number of key points that can help in making this happen.

Below, Dr Norman Weatherup, Senior Beef Technologist, Cafre, lists nine top tips on how to ensure the bull you buy is fit-for-purpose and that he will do a good job once he’s in your herd.

1. Make sure you vaccinate for disease

Pay particular attention to the health status of the bull you are buying and think through the implications for your own herd.

BVD is a widespread disease with massive potential to disrupt fertility and it is often ignored or poorly understood.

If a bull comes from an accredited, free herd, it will never have been exposed to the BVD virus.

If the bull becomes infected in the purchaser’s herd, he will recover and become immune, but he will be infertile for possibly two to four months – just when he is really needed.

See also: Estimated breeding values: How to use them when buying bulls

Make sure all booster injections are administered according to manufacturer’s instructions and that vaccines are handled carefully.

It is pointless testing a bull under two years old for Johne’s disease. Even if a bull does have Johne’s, he may test clear at this age, only for the disease to become apparent at a later stage.

The best approach is to purchase from a Johne’s Risk Level 1 herd.

Carry out any foot trimming at least six to eight weeks before the start of the breeding season. Feet and legs do a lot of work in this period.

Scrotal circumference is closely related to both volume of semen and percentage of normal sperm cells.

Furthermore, research has also found a strong genetic relationship between scrotal circumference in bulls and the fertility of their daughters, as measured by age at puberty.

Nadis recommends a minimum of 32cm at 18 months and 34cm by 24 months. Extreme size, i.e. more than 40cm, can indicate possible health problems.

A bull is often bought a very short time before he is turned out with cows.

Because many farmers only select breeding stock by eye, young bulls are often fed intensively to achieve the highest weight gain and fat cover possible.

While these young bulls will look exceptionally well on sale day, the fat deposited around the neck of the scrotum will adversely affect sperm production for the rest of their lives.

Their feet may be permanently damaged and they may not be able to mate as many cows as they should.

Often, these bulls are turned out with too many cows and are given too little feed so they lose a lot of weight in a very short time, which also adversely affects fertility.

It is better to buy a bull before he gains excessive condition or else at least three months before he is needed to start serving cows to allow time to return to moderate body condition.

Dietary changes should not be sudden and forage alone will not be sufficient to maintain the young bull, which will be anything up to 1,000kg in weight.

Bulls should be fed to gain 0.8kg/day.

Prior to purchase, a bull may have been on a high concentrate level fed frequently per day, so these bulls should be given concentrates in at least two feeds per day for one month after purchase.

A bull may have seen little grass since the suckling period.

Importantly, ask about the management so you can tailor your feeding. Ideally, provide supplementary feed when the bull is turned out to grass for four to six weeks.

Bulls will often have been in individual pens with a lot of human contact (walking/grooming) plus several feeds per day.

After the sale, provide human contact and allow him to see his surroundings even though he is in isolation.

Make sure pen divisions are high and strong – many accidents happen with bulls trying to jump out of pens shortly after arrival.

7. Train a young bull to serve animals and don’t over exert him

Young bulls are sexually inexperienced and ideally a mature cow should be taken to him, allowing him to serve her several times.

Bulls should be penned where they can at least see cows, if not other bulls working.

Young bulls are enthusiastic, but have low semen reserves and hence they should not be run with too many cows.

A guide is one cow per month of the bull’s age, so 18 cows could be run with a bull of 18 months of age. Approximately 20-40% of bulls could be temporarily infertile or permanently sub-fertile, while others may appear to mount cows but fail to deposit semen correctly.

8. Carry out an annual bull MoT

Many farmers assume that all bulls are 100% fertile all of the time.

However, a small percentage of bulls (fewer than 5%) are completely infertile, but a significant proportion (20-40%) are either sub-fertile all of the time or infertile some of the time, or both.

Bulls that pass an MoT consistently get more cows in calf more quickly than the standard “hope for the best” bull. The MoT covers two areas:

The final test is libido and mating ability. If a bull has no interest in cows, or can mount but not place semen in the vagina, he isn’t any use.

Some farmers swap bulls as an insurance measure in case one or more are sub-fertile.

However, this can increase calving index and reduce profitability. It also allows sub-fertile bulls to remain undetected for years.

In addition, if he is sub-fertile due to underdeveloped testes, he may be passing his poor fertility on to his daughters as well.

A sub-fertile bull is better identified sooner rather than later and disposed of before he does serious damage to herd fertility.