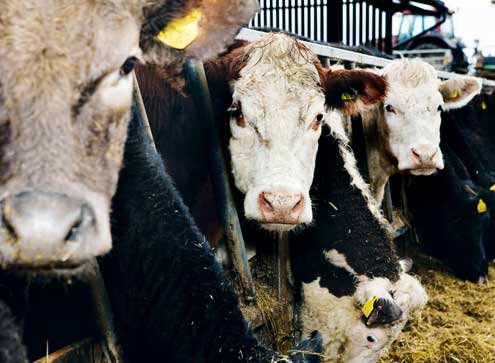 Bovine viral diarrhoea is costing the UK livestock industry £40-50m annually, with as many as 80% of herds thought to contain the disease. Jeremy Hunt takes a look at what each of the nation states are doing to tackle the disease

Cattle producers in England are responding well to the three initiatives in place to control BVD. A rural development programme coordinated by EBLEX and DairyCo together with Raft Solutions (part of the XL Vets group) aims to make farmers, vets and farm advisers aware of BVD and how to eradicated the disease.

DairyCo’s Elizabeth Berry says the initial impetus has come from vets because of their ability to raise awareness of the disease among cattle farmers – and to then raise the awareness of other advisers.


“We’ve had more than 90 veterinary practices participate in this stage of the scheme. Following attendance at training events, vets have been training other vets within the practice and each practice has recruited 15 farms to be involved in the initiative,” says Dr Berry.

“Herds that identify persistently infected animals can then follow the necessary protocols to eradicate the disease from their cattle. Those found to be clear can adopt approaches to management and bio-security to retain their BVD-free status.”


Herds free of BVD can implement improved fencing to protect stock from any contact with neighbouring cattle and be fully aware of the need for strict biosecurity measures when stock are taken to sales or shows and to undertake a vaccination programme where appropriate. Any farmers who haven’t been recruited by their vet, but are keen to adopt improved BVD control measures, should apply to their vet to find out more about the training options available, says Dr Berry.

There are two other regional BVD initiatives under way in England. The South West Healthy Livestock Initiative is open to both dairy and beef producers and focuses on a range of cattle health issues, including BVD, and operates through vet practices. A BVD scheme in the North West is being driven by the NFU, primarily for dairy farms.


“All these BVD schemes are voluntary initiatives in England at the moment, but so far there has been a very good response. All farmers need to be aware of the risks of buying in stock and maintaining their current BVD-free status if they are free of the disease. For those wishing to have a more formal recognition of their status there is the CHeCS scheme with guidelines and protocols” adds Dr Berry.

HCC has provided beef producers with support during 2011 and 2012 to undertake free BVD testing of their herds – and it’s meant 3,000 cattle have gone through the scheme. It’s only a small percentage of the national herd, but it has meant farmers involved have benefitted from advice and engagement with vets, although funding has now expired.


“We hope more funding will be available through the next rural development plan for Wales from 2014 onwards and that it will provide a pan-Wales approach to tackling BVD. A herd’s health status has an effect on profitability and animal health, as well as welfare benefits,” says Mr Jones.

He believes farmers need to see there’s a total commitment to tackling BVD across Wales. “Getting on top of BVD piecemeal is going to be less effective when farmers who do get involved feel they can easily become reinfected by buying in animals.”


Welsh farmers wanting to get involved in BVD control should work with their local vet on a herd health accreditation scheme – but the costs have to be met by the farmer.

“We are working towards a pan-Wales approach through the rural development plan, which would set up a more effective means of tackling BVD that would have wide appeal to farmers – but this would have to be agreed and would be subject to funding. We are looking very closely at what’s happening in England and Scotland. Hopefully we can learn lessons from how other schemes are being applied,” says Mr Jones.

BVD eradication in Northern Ireland is based on the Agrisearch/DARD programme and is having outstanding success by meeting its target of 30% of all cattle herds.

By the end of April this year a total of 911 herds had joined the scheme – and it’s estimated that by the end of May that figure will have risen to almost 1,500.


The programme began with a voluntary period starting in January 2013, with the compulsory phase proposed to start in 2014. It’s based on testing for the BVD virus from ear-punch samples collected through identity or management tags. The tissue sample test is designed to identify calves persistently infected with the BVD virus as soon as possible after birth to enable immediate culling.

The cost to the farmer is the actual cost of the tissue-tag, which is a conventional tag with a module attached that provides DNA from the pierce. The module is posted off by the farmer for the BVD test. Cost is about £5.50, which includes the test.


Caroline Buick, policy officer with the Ulster Farmers Union, says the target is for 30% of all NI calves to be tissue-tagged this year. Current figures suggest that will be achieved. So far there have been 12,168 results uploaded, with 0.6% being positive. The breakdown of herds is 51% beef and 33% dairy.

“Any farmer wanting to get involved should contact Animal Health and Welfare Northern Ireland, which has been set up to run the scheme. We’ve marketed the programme very vigorously on the basis that we have to react to this disease. We cannot afford to be left behind. And farmers must remember that it costs more to keep a PI calf than to identify a PI and take it out. The effect on farm income will be one of the biggest drivers of the programme,” says Ms Buick.

Each herd involved will complete three years of tissue-tag testing of calves, followed by a further three years of lower-intensive surveillance.  Farmers can join the programme by ordering tissue sample tags from a tag supplier (details at www.animalhealthni.com) that has been designated by the BVD implementation group.


Figures indicate that BVD virus infection in Northern Ireland herds is very widespread, but eradication presents an opportunity for cattle producers to “significantly improve profitability”, according to the NI farmer-funded organisation Agrisearch, with additional benefits for animal health and welfare.

Compulsory BVD screening has so far seen 90% of Scottish herds tested. “This was a fantastic response,” says Derek Wilson of the Scottish government’s animal health and welfare division. Reminders are being sent out to herds still to test, but plans are already under way to implement the second phase of BVD control legislation to be introduced later this year.

This will impose a range of restrictions, including the movement of PI animals, which will only be allowed to move to slaughter. Farmers who have not carried out testing will also have restrictions imposed on stock movements from their holdings. There will also be compulsory herd health declaration imposed to assist buyers – something the government believes will help BVD-clear herds earn a premium for stock.   All screening costs have been met by farmers, although the costs can vary depending on how many cattle are tested – there are six options ranging from tests for five animals to testing the entire herd.  Stock moving into Scotland – for showing or selling – does not currently need to be tested for BVD, but when an animal is brought into a herd from across the border it will become part of into the testing cycle. But the legislation planned for later this year could see markets and show organisers request declarations of BVD status from the owners of cattle being brought into Scotland.