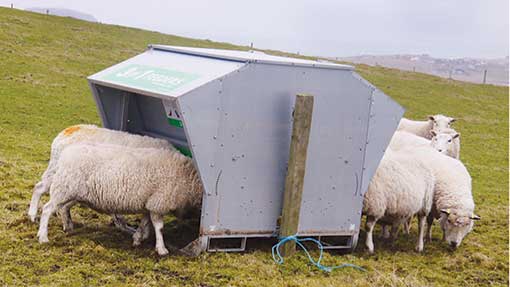 The same number of lambs for half the feed cost may sound too good to be true, but for one sheep producer in Shetland it’s a reality this year.

Jamie Leslie has traditionally flushed ewes on grass, with feed blocks used for supplementary feeding as grass quality declines through the autumn.

But while feed blocks offer a convenient and labour-saving way to supplement ewes at grass, the cost can soon add up.

With this in mind and with access to home-grown whole barley, Mr Leslie was keen to explore new ways of supplementing ewes at tupping.

“We have access to barley at about £150/t and it makes more sense, particularly bearing in mind our island location, to maximise the use of home-grown cereal feed, rather than buying in feed blocks that have to be transported from the mainland.

“However, feeding straight barley to ewes isn’t as simple as it might be, and we needed an effective feeding system that would allow ewes to eat their needs, but wasn’t labour intensive.

“That’s where block feeding has been so effective, as it doesn’t require feed to be carried to sheep every day, cutting down the labour needs of the system.”

As a result, Mr Leslie wanted a system that would enable him to feed barley on an ad-lib basis, but with restricted intakes.

“Ad-lib feeding has the advantages of block feeding as it reduces labour needs, but limiting intakes and ensuring all ewes get a chance to feed rather – than a small number gorging themselves – is essential, particularly when feeding whole cereals.

“I had been looking for bunker feeds suitable for ewes for some time when I came across the 3in1Feeder. It offered the opportunity to give ewes whole barley on an ad-lib basis while limiting intakes through its innovative lick system.”

With this type of feeder, sheep have to lick the feed from the feeder rather than eat mouthfuls at a time, he says. “This means they can only eat while they have sufficient saliva in their mouths, which isn’t actually that long.”

However, with no experience of the feeders, Mr Leslie was unsure how well ewes would adapt to the system. As a result he set up a trial to assess how ewes supplemented with the feeders compared with ewes fed on the usual block system.

“All ewes are at grass for flushing and tupping, but we generally supplement feeding as we’ve found it increases our scanning levels by an average of 15%.

“While this increase in scanning percentage generally more than repays the investment, as with every sheep system the need to keep a tight control on costs is paramount,” explains Mr Leslie.

“On top of the benefits of increased lamb numbers, our location dictates that some supplementation through tupping is almost essential. Grass conditions can change quickly here, with a spell of bad weather quickly reducing the available grass and limiting regrowth. One salty gale can change everything here.”

As usual, ewes were put to grass fields for flushing at the start of the second week of November. Feeders and blocks were then introduced to the different groups a week later.

“To avoid the risk of acidosis for the first day or so I used ewe nuts in the feeders to get the ewes used to the idea of eating from them before introducing barley. It was surprising how quickly they adapted, with average intakes of 0.3kg/ewe/day after just the first day on ewe nuts.

“Key to ensuring quick uptake of the new system was to leave the feeder groove about one-third open for the first day or so to encourage ewes to eat. Once ewes were used to the system, I shut the groove down and intakes on straight barley settled out at an average 0.18kg/ewe/day.”

All ewes were body condition scored before going into their separate groups, so Mr Leslie could monitor how the different feeding systems compared.

After 53 days of flushing – 44 days of which included supplementation with either barley or feed blocks – the group on feed blocks had increased their body condition score (BCS), with results showing those fed barley through the 3in1Feeder had the most noticeable increase, with more uniform scores.

“In the barley-fed group, 90% of the ewes had a BCS of 3 or more, whereas there was much more variation in BCS, with more than 20% scoring below 3.”

Mr Leslie says he has been surprised by how quickly the ewes adapted to the new system, and while it was initially more labour intensive than block feeding, this was due to him taking time to get the sheep used to the feeders. “The extra labour was really just me learning how to set the feeders up correctly and adjusting the settings to suit the system.

“Crucially, on a cost basis, feeding whole barley has been significantly cheaper than supplementing ewes with feed blocks. It was nearly twice as cheap to feed barley as blocks.

Importantly, the cost savings have been made with little or no effect on scanning percentage in the flock, with the group fed on blocks scanning at 177% and the group on the feeder scanning at 175%, he explains.

“While there may be a 2% difference in the groups, that was actually the result of having one more barren ewe in the group on the feeder compared with the feed block group, so it’s a negligible difference,” says Mr Leslie.

“I was concerned the ewes might have more triplets in them, but I’m happy they don’t. I’m sure some mainland farmers would want higher scanning percentage than this, but we are happy at this level and like to keep the triplet numbers down.”

“The single ewes are now on the feeders instead of blocks, so the feed saving will continue right through to lambing. We may add a bit of soya into the barley if the ewes look as if they need it nearer lambing, but probably not,” he adds.