Former dairy farmer Adam Frampton is achieving 93% conception over a nine-week calving spring block – something he sees as “vital” to the smooth running of his mixed farm.

He says a holistic approach across health, nutrition and genetics is helping 70% of cows to calve in the first three weeks of the calving season. 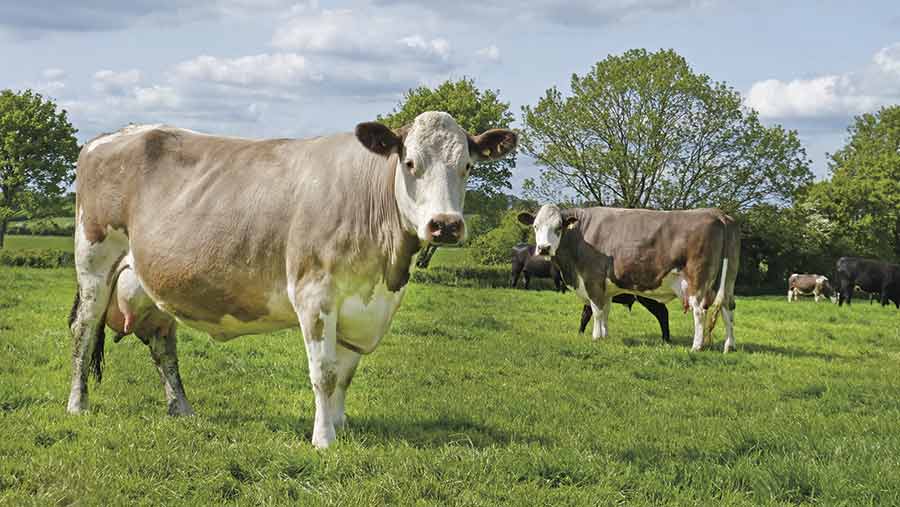 Mr Frampton quit dairying in 2007 and set up a beef herd five years ago. His dairy background, alongside attending regular beef group meetings with Friars Moor Vets, has aided fertility success in his all-natural service herd of 85 cross-bred herd of Friesian-cross Angus-based cattle.

“My priority is cows not losing condition or getting fat,” states Mr Frampton, who calves cows inside in March and April before a May turnout.

“I set out with the intention of calving tightly as I have other enterprises on the farm. The herd weighs around 670kg on average and I target low birthweights of 35-40kg, although some calves are heavier.”

When the decision was taken to start a suckler herd, Mr Frampton was under no doubt that that an eight- to nine-week calving block was essential if beef cows were to work alongside the early lambing sheep flock and arable enterprise at Manor Farm, Sturminster Newton.

Lambing takes three weeks from  4-24 February, leaving a narrow window to calve before spraying and silaging takes priority in May, explains Mr Frampton, who sees pregnancy diagnosis as “a given”.

“As a former dairy farmer, pregnancy diagnosis is a no brainer really – there are so many benefits from it,” he adds.

“Any barren cow goes. The whole point of the tight calving pattern is to select from cows that will get back in calf every year.

“I want to watch calving cows for things should they go wrong, although that said I never pull calves and only intervened twice this year,” adds Mr Frampton, who has just bought 10 in-calf Stabiliser heifers for their easy calving and feed efficiency credentials.

Pregnancy diagnosis takes place on cows in mid-September, while heifers are checked in mid-August to allow more finishing time for empty heifers.

“I don’t want to keep her until spring and then try and fatten her,” says Mr Frampton, who supplies fat cattle to ABP at Langport. “[If] she is older and her feed conversion rate dips it will make her more expensive to finish.”

Disease prevention is seen as the best route to cows maintaining condition, getting back in calf and weaning one calf each year at Manor Farm. 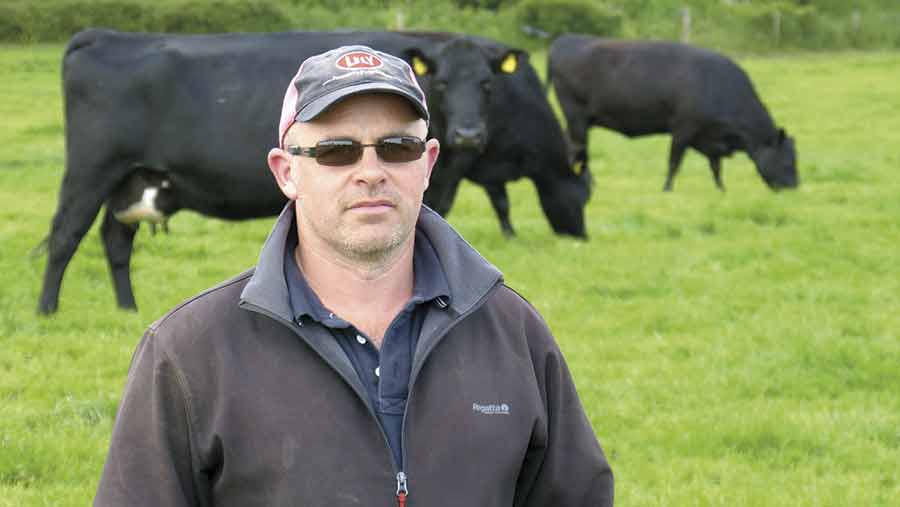 Meanwhile, youngstock are tagged with a BVD-check ear tag and vaccinated at weaning for BRD as part of the Sure Calf scheme.

“We aren’t an accredited BVD farm but we are BVD-free,” explains Mr Frampton. “Calves are given a BVD-check ear tag and recorded through National Milk Laboratories, which means there aren’t any persistently infected (PIs) hanging round the farm.

“This is for peace of mind and is my second year of doing it. I’ve had BVD in two calves in the past and it was awful. They scoured the one day and were dead the next.”

Routine bolusing with a slow release, six-month, bolus is used on breeding stock as an insurance policy against fluctuations in mineral levels. A double bolus is administered in mid-January supplying copper, cobalt, selenium, manganese, zinc, iodine and vitamins A, D3 and E.

“We were blood testing cows for mineral levels annually and have settled on something that works,” says Mr Frampton. “We are quite low-lying here next to the River Stour and flooding can markedly alter the trace element situation.

We used to have to watch copper in the dairy cows and manganese is an issue from time to time on the arable land.”

A close eye is kept on nutrition to maintain the herd at a body condition score of 2.5-3 through the year, which Mr Frampton logs on his smartphone.

Using a data program called Sum-It, cow and youngstock performance is recorded. Growth, health and performance of heifers can be monitored, too. Currently replacements are hitting daily liveweight gains of 1kg for the first 15 months to calve down at two years old.

Typically, dairy farmers get more attention in Dorset. Vets are on beef farms often just to react to problems, while Friars Moor are really focused on being proactive. Working with the beef group builds a community and a good place to share problems as well as ideas. Adam Frampton

Through winter, fit cows stay out on forage rape until Christmas while thinner cows under 2.5 BCS are brought indoors early in the autumn and put on grass silage targeted at a quality of 35-40%DM 10-11%CP to improve their condition.

Silage intake is fed at 3% of bodyweight from the point of housing before being increased to 5% in late February, one of benefits of a tight calving pattern.

“You can feed the cows in a more uniform way,” says Mr Frampton. “Extended calving patterns mean cows at the end of the pattern have very different needs to cows bulled first.”

And while this approach takes time, vet Lucy Hepworth says the attention to detail taken around herd nutrition is really paying off.

“Restricting feed late into gestation can lead to poor quality colostrum, so stepping up protein is important at that time,” she explains. “This also assists the developing foetus which is growing 1kg/day in utero in the last three weeks of pregnancy.”

Manor Farm currently runs three Aberdeen Angus bulls across three groups of cows. Bulls are bought locally, chosen on EBVs and are subjected to annual feet trimming and fertility testing three months prior to the breeding season in February.

At this time, dietary protein is increased for bulls a whole nine weeks ahead of the breeding season.

Around 1-1.5kg a head a day of high protein nuts (18%CP) supplements silage fed at 5% of bodyweight and straw is fed ad-lib in late winter.

This is key for improving semen quality and breeding success, according to vet Helen Rogers.

“The process of developing bull semen takes place over eight to nine weeks,” she explains.

“The first cow bulled will be served with semen that was being made two months earlier and it’s important to step up nutrition with that in mind.

“Fertility testing is also important to put a farmer’s mind at ease and samples are collected successfully around 95% of the time. The protocols at Manor Farm have really heightened awareness within the beef group and people are realising a lot of bulls can be sub-fertile.”

Three bulls will be used this year: a terminal five-year-old bull for 30-35 mature cows; a more maternal three-year old, who will also bull 30-35-head; and a two-year-old all-rounder to serve 21 heifers.

Innovation designed to enable livestock producers to step up efficiency will be showcased in the new Beef Arena at Livestock Event, held at The NEC, Birmingham, on 6 and 7 July.

An on-demand weigh system enabling producers to track DLWG and manage nutrition accordingly will be showcased together with next generation 3-D imagery measuring growth and fat deposition.

Parking at the event is free and tickets can be obtained in advance. To find out more information and to register for free entry www.livestockevent.co.uk