Following the findings of last month’s inspection of UK sheep identification and movements,there are several practical steps which can be taken to rectify problems found, according to the NFU and NSA.

“But it’s crucial we get the basics right,” he adds. “There are two main non-compliances which can be easily rectified that have been highlighted by the recent inspections – inaccurate record keeping and incorrect use of tags. We have a system that works and already individually identifies animals, but it is essential producers adhere to these simple rules so as to not jeopardise the current derogation.”

In the past, EU inspector visits have highlighted the issue of farmers not stocking R tags and the industry has taken this on board, says Thomas Binns, NFU livestock board chairman. “We now stock them. But have failed to take it to the next level by recording the use of R tags at the time replacement takes place, rather than when animals move off the holding.

Highlighting the importance of an industry wide approach, NSA chief executive, Peter Morris comments that inspectors were, overall, satisfied with stocks of tags and most paperwork. “But a common error was Section B of AML1 forms – Transporter Details, as many producers filled this in either inaccurately or not at all. This form cuts out a level of paperwork and complies with WATO rules, in essence doing the industry a favour.”

“If we lose the case for a derogation, the cost of using two identical tags will be a crippling blow to producers. Anyone with cattle will know the practical and economic aspects of double tagging, particularly replacements,” he explains. “Across the industry, we need to fully understand the rules and apply them across the board.” 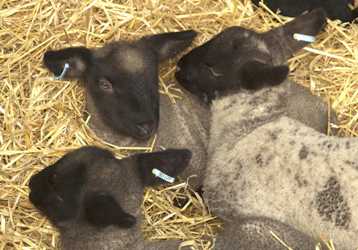 The current tagging system rules require every sheep to have an individual number as a well as a flock number as their official means of identification. When a tag is lost, it can either be replaced with a tag of the same number or a replacement “R” tag. Similarly, any subsequent moves the sheep makes after it has moved off its holding of birth usually require the use of an “S” tag which avoids the need to record individual numbers. Any sheep can have a maximum of three tags before individual numbers have to be recorded.

In theory current tagging practice works, according to Hampshire-based stock manager Martyn Fletcher. “But, for anyone who is using tacking, or grazing store lambs on seperate parcels of land, accurate recording can’t be easy.”

But ahead of electronic ID (EID) rules coming into force in 2008, Mr Fletcher believes the technology to support accurate EID could be found wanting if a surge of sheep farmers were to adopt the procedure. “I am actively pursuing the EID route and have taken measures to ensure it works on our farm, alongside existing programmes we use for management. But we are finding it difficult to find the technology to support this, so how is broader industry going to support it?”

Although EID regulations are, in theory, supposed to come into force in January 2008, an optimistic view is that implementation will be delayed, with batch movements being favoured, according to the NFU.