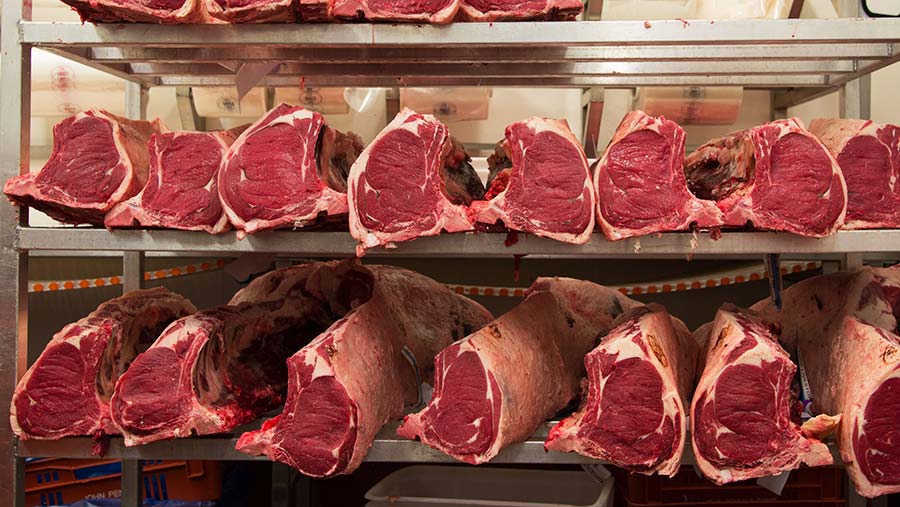 The quality and consistency of English beef is rising as breeders continue to make improvements to their herds, a study has found.

According to the 2016 AHDB Beef and Lamb retail survey the tenderness of sirloin steaks and roasting joints has increased over the past five years.

The latest findings show that quality is more consistent with a reduction in the variation of tenderness. That means there is less risk of a consumer buying an excessively tough cut.

Phil Hadley, head of global supply chain development at AHDB Beef & Lamb, said the findings highlighted the improvements being made by processors and farmers.

“It’s great to see that English beef is now more reliably tender than ever before,” said Dr Hadley.

“The latest findings demonstrate the effort and continued improvements being made by processors and farmers across the country, who are working tirelessly to ensure only the highest quality of beef is delivered to our retailers.”

The survey was launched in 2011 amid concerns about the variation in the toughness of English beef. Samples of two popular cuts were collected from six major retailers.

Two prominent discounters were added to the survey in 2015. The survey was carried out again this year, with a total of 80 sirloin steaks and 40 beef roasting joints collected over a five-week period, to see if the trend in tenderness was continuing. The assessment is objective.

The shear force, needed to cut a piece of meat, is measured precisely to give an accurate picture of tenderness.

The most noticeable difference was the reduction in variability found within steaks with the toughest cut this year measured at 5.0kg – giving a difference of 3.5kg against the best steak. In 2011, the difference between the most tender and tough cut was 7.5kg.