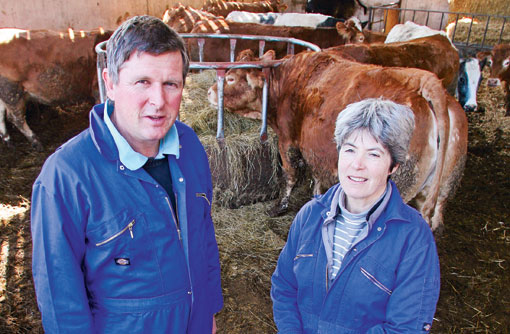 On Gower we rear bucket calves from dairy herds, and during the past year have carried out 37 follow-up TB tests on calves, whose original herd has gone down with TB. This meant at least 10 separate testing days.

We are happy to carry out these tests, but feel that the Animal Health and Veterinary Laboratories send out notices that are unnecessarily threatening.

Last October, a full clear test was carried out on time. However, we still received a notice prohibiting the movement of bovine animals because the computer had not been updated.

At the end of the month, another restriction was imposed for failing to test a calf that was ineligible to be tested as it had been tested in the previous 60 days.

In March, a further notice was served on us for failing to test a dead calf.

In the past six weeks, a new computer system has been set up linking AHVLA with our vets. We are now receiving ‘Zero Tolerance Advisory Letters’, one month before a TB test is due, if a test date has not been booked with the vet.

As the AHVLA is not infallible, reminders sent out to farmers – who have not yet done anything wrong – could perhaps be worded less severely.

Finally, we recently asked to postpone a test, due on October, on four calves – two of which have been on our holding over a year – until our full herd test, which is due on 22 October. This was not allowed.

Jolyon and Alex Higgs farm beef and sheep in Llanidloes, while their son Tom farms beef, sheep and cereals on the Gower in partnership with Alex and her parents.