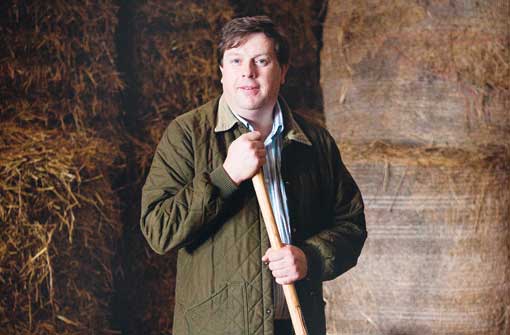 Since my last article we have seen the quickest turn around in weather conditions in Fermanagh in living memory, one week sub-zero temperatures then a few days later a heatwave in the high 20s.

And with the heat came a sudden burst of grass growth. All stock are outside at the moment and the bulls are getting plenty of exercise in their paddocks. First-cut silage taken on 25 May was lighter than last year, but with all the slurry spread and fertiliser sowed we are hopeful of a heavy second cut.

Alan has finished his course at Greenmount and is working for Erne Veterinary Lisnaskea. Matthews’ Beltex entries at Balmoral did him proud, scooping the reserve overall Beltex champion, best pairs, best group of three and female champion.

With the recent warm weather a large amount of BBQ meats were sold in the shop. I even supplied a pig on a spit for the village festival on the Queen’s Jubilee Weekend.

The Northern Ireland Simmental Club annual stock judging took place on 4 June. Alan won the junior section, so by the time you read this he will have represented Northern Ireland at the South of England Show.

As I write this we are looking forward to welcoming the Charolais World Congress to Fermanagh and we hope all the delegates really enjoy their stay. We are busy getting bulls ready for the national show at Fintona where there will be a fine display of Charolais cattle for all our visitors to browse over.

Congratulations to John Brown on been voted on to the Charolais Council to represent N Ireland.

Andrew Burleigh farms a mixed farm and runs a traditional butchers shop in south-west Fermanagh with his wife, Rosalind, and sons Alan and Lee. The home farm is run by his brother and nephew, and is home to a Beltex pedigree flock along side a commercial flock, suckler cows, stores and beef cattle.

For more articles from Andrew Burleigh