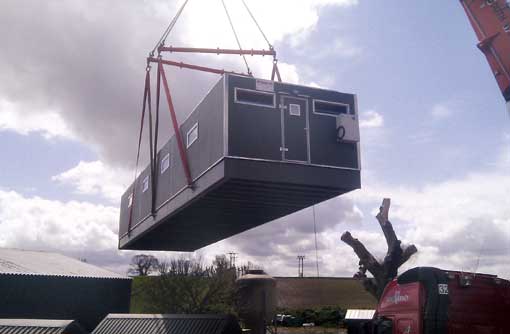 Sixty days after the fire the new farrowing accommodation arrived. It comes completely made; you just have to plug in the water and electric supplies and away you go. The buildings arrived on farm at 11.30am, were sited by 2pm and by 7pm we had moved in 14 sows/gilts, which were due to farrow the next day.

The first thing to arrive was the crane, which costs £1,100 a day to hire. To buy it though would set you back a cool £1m, which makes a Lexion look cheap. It can lift 13t to 200t. If you have ever wondered why they are all left-hand drive it’s because when sold they are almost always exported, and never for less than they cost new.

The farrowing houses were next to arrive from Ireland on two lorries which were 65ft long and 13ft 9in wide with a small vehicle escort. After a few tree-related delays they were safely onsite, without any major complications.

I had a great feeling of relief when we got the first sows in, immediately managing them will become a lot easier; roughly we will now keep alive an extra one piglet from every litter, or about 700 a year.

Even better than the arrival of the buildings was the arrival of the rain. This week I had to walk around the farm playing streams to divert field water into ditches to prevent flooding of the dry sow shed. We have had more than 50mm so far this week with more forecast; praise to whoever you worship.