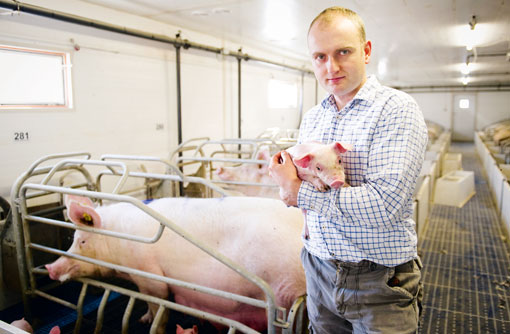 How many pigs would you ideally like to wean? I have struggled for a long time to wean more than 11 pigs a litter.

Until recently it seems the rest of our pigs had the same ceiling on litter size, with only a few now able to break over this. Last week I had the best week’s farrowing ever with 13.7 born alive. However I experienced quite a number of deaths in the first few days after birth. This was due to sows drying off prematurely and not producing enough milk for the pigs. The pigs were normal sized and should have survived as we evened out litters making them up to 13 pigs a sow.

I believe my sows can suckle the extra pigs, as they are all under sixth litter. But the pigs seem to be unable to stimulate the udder enough to keep the milk flowing, especially in the rear teats. To prove this theory I successfully tried suckling 14 pigs, which were one week old, on sows that had farrowed two days previously. This worked well as these lively pigs had the strength needed to stimulate milk letdown from all teats. I have devised a fostering system that will allow sows to suckle 13 or 14 pigs by using these one-week-old pigs to keep milk flowing. This does take a lot of extra work, and we need some major management changes to keep these extra pigs alive.

There are worrying reports that grain prices are going to remain high, which is causing me some concern. I am not wishing for grain prices to collapse but “everyone needs a turn” as they say in Northern Ireland.

Andrew McCrea farms a 740-sow birth-to-bacon business and 150 beef cattle on 37ha. The pig business is a sow and weaner farm with four contract finishers. He produces 18,000 pigs a year to the British Quality-assured Red Tractor standard. Andrew is a DARD Focus Farmer and was 2010 Farmers Weekly Pig Farmer of the Year.