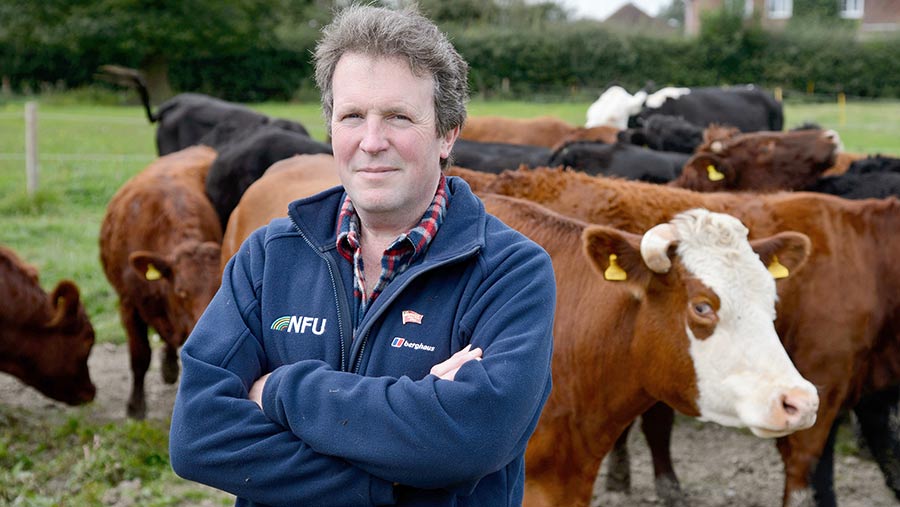 Simple and low-cost farming is the mantra of Warwickshire sheep and beef farmer Adam Quinney, the AHDB Beef & Lamb chair, who is seeing gross margins of £450/ha on cattle and £700/ha on his sheep enterprise.

Calving at two, minimising bought-in feed and maintaining a thorough knowledge of costings and herd and flock performance have driven the Quinneys’ mixed farm since they started tenant farming 30 years ago.

Based in Warwickshire, the former NFU vice-president and his wife Sarah farm Lleyn sheep and Salers-cross cattle at Reins Farm in Redditch.

“These costings include everything including labour and depreciation up until the point of weaning lambs and weaning calves at 200 days of age,” Mr Quinney explains.

“We only go up to weaning because we could sell store lambs and weaned calves and we like to then judge the finishing systems separately to see if they are efficient.

“The question Sarah and I ask is: how simple can we make everything and how can we reduce our reliance on the outside world by reducing the need to buy things in?

The system requires minimal labour inputs and stock to manage themselves, allowing Mr Quinney the time he needs to fulfil his role at AHDB Beef & Lamb and other industry activity, which regularly sees him away from the farm four days a week.

All stock calve and lamb outside on pastures with no fertiliser inputs. Clover is grown to feed youngstock and finish lambs, and pastures are rotationally grazed on three- to four-day shifts with electric fencing.

Lambing takes place in April and cows calve in June and July.

“Our thinking behind the June/July calving was that we can calve in the kindest weather and then finish them at 20 months the following spring, making best use of the 15t of nitrogen above our heads in the atmosphere by growing clover,” Mr Quinney explains.

Cows are housed for winter in straw and slatted yards. Calves are weaned in January at their annual TB testing without creep.

First-cut silage is fed to cows through the winter and usually analyses at 9% protein, 10.5 metabolisable energy (ME) and 35% dry matter.

Second cuts are predominantly red clover leys, typically analysing at 16-17% protein, 12+ME and 30% DM. This is fed to growing youngstock.

Fields are soil sampled once a rotation to correct deficiencies. “Because we don’t use artificial fertiliser our grassland pH stays in the 6-6.4 range,” Mr Quinney says.

Easy Care tups are bought from farms the Quinneys know run a similar low-cost system to theirs, with estimated breeding values used in the last stage to improve certain traits.

“With our last two tups we have looked to improve the loin. But feet could be more important some years and lambing ease is important – we like to buy from farms that are good at recording,” he says.

The French Salers website houses manuals for AI bulls, and the Irish Cattle Breeding Federation has online databases which the Quinneys use to evaluate the French genetics they use on their herd.

Very strict culling policies mean that anything that gets flystrike is culled and anything lame or barren is culled. Any prolapses are deemed culling offences and sheep that leave their lambs are noted down.

Mr Quinney believes a system that works around sheep lambing themselves suits the farm.

He has calculated that every time a ewe lambs naturally the farm saves 22p/kg on the lamb being sold deadweight – because that is the cost of catching a ewe and lambing her, based on it taking 15 minutes to lamb a ewe and £25/hour to pay for a worker and a quad.

Sheep are stocked at 11 ewes/ha or 4.5 ewes/acre to help maximise the kg/ha of saleable lamb on the farm.

This is achieved by rotational grazing to increase grass use and by using the Lleyn sheep, which typically have a mature size of 55-60kg, meaning low maintenance requirements and higher stocking rates.

Exlana tups from Peter Baber, Devon, have been helping avoid fly strike, which is bad in the area. Flystrike cases have reduced from up to four cases/day in peak spring periods (late April/May).

Wool shedding genetics has reduced cases to less than 1%, although a little tuft of hair on the shoulder can prove troublesome, rather than the rear end.

Heifers are monitored closely and wintered on quality silage, ensuring they reach 350kg (60% of calving weight) by 15 months of age.

Pelvic areas are measured and a calculation is taken of internal pelvic area, which informs breeding decisions and ensures heifers can cope with outdoor calving.

Cow size is falling by using Salers genetics on a base of Holstein-cross and Limousin and South Devon, which averaged 750kg. Now the herd is moving towards 620kg, with 600kg (when at condition score 3.5) seen as ideal.

Cows are rated A, B and C based on calving ease (1 unassisted – 5 vet assistance) and weaning weights (200-day weight).

Class A cows are in the top quartile for performance and wean 45% of their bodyweight or more, Class B cows are in the middle two quartiles and class C are potential culls.

This is used as a check to make sure things aren’t getting worse rather than better, says Mr Quinney, who admits that improving weaning efficiency is most likely a combination of management and genetics.

The last five cows from the calving pattern are culled each year to keep a tight calving block.

Any aggressive or wild behaviour is a culling offence, and even cows that are stood up first and looking alert when people enter fields are noted down.