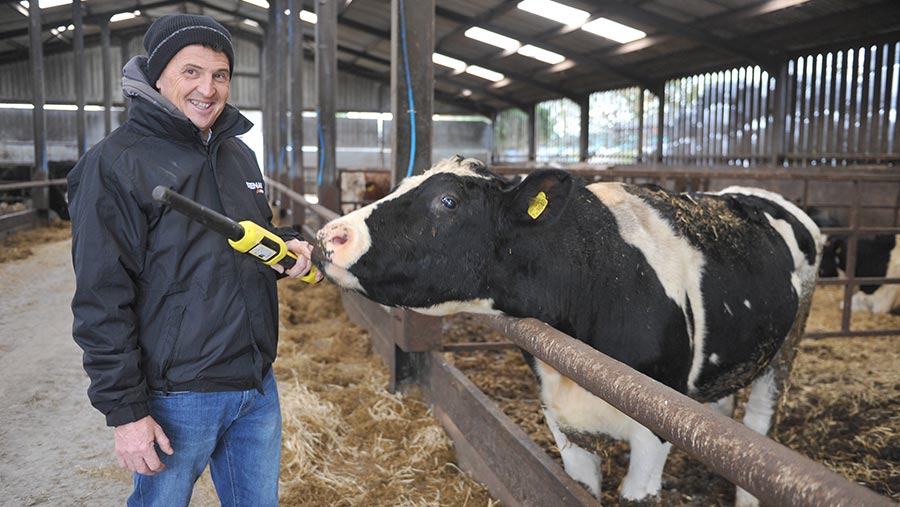 Mr Evans aims to achieve an average daily liveweight gain (DLWG) of 1.1-1.2kg, or 1kg from grass at Penrallt Farm, Llantood, near Cardigan, Ceredigion, which he farms with his parents, Peter and Jean.

The family had been keeping paper records of cattle weights, often relying on guesswork to establish when animals had achieved their optimum weight.

However, as part of a Farming Connect Focus Farm project, he switched to a system of capturing data from the herd electronically.

How EID is being used

The cattle have been tagged with an identification tag and this is read using a handheld reader.

The reader is linked via wi-fi to a weigh scale system, which is able to monitor performance.

The information captured, including weight gains, is used to help manage stock in a simpler and more effective way, explains Mr Evans, who sells cattle directly to processors.

EID allows him to check when his animals are getting close to the best sale date.

Those small changes and adjustments to the ideal sale date can make a big difference to the margin, he says.

“EID gives me the daily liveweight gain for individual animals and I can use that information for quicker and more accurate decision making about rations and when to sell stock for the best returns.

“Downloading the data from the software is a simple process,” says Mr Evans.

Since he installed the system, Mr Evans knows exactly when an animal has reached its full potential.

“In the past, we might have kept a beef animal on the farm even though it wasn’t gaining any weight, which effectively meant we were losing money on that particular animal,” adds Mr Evans.

EID also helps with his buying decisions by identifying which animals are performing best under the system at Penrallt Farm.

Mr Evans sources dairy-bred store cattle from local livestock markets, mostly in the autumn, aged 18 months, and aims to finish at about 30 months at a 700-720kg liveweight average.

Every animal is treated for fluke and worms when it arrives on the farm and for pneumonia at housing.

The store ration a head comprises:

At finishing, this increases to:

Beef nutritionist Hefin Richards, who has worked with Mr Evans on the Farming Connect project, says EID has helped to pinpoint strengths and weaknesses in the system at Penrallt Farm.

It has also allowed them to identify strong-, average- and poor-performing cattle.

“We can compare the data of cattle with similar birth and arrival dates to identify any variations in performance and in terms of lifetime daily liveweight gain,’’ he explains.

This animal generated a daily margin of only £0.07.

This animal generated a daily margin of £0.51.

Advice for investing in EID

“As you use EID to build up information like this, you can start to make different decisions,’’ explains Mr Richards, of Rumenation Nutrition Consultancy.

It can pick up on trends. For instance, if a group is performing poorly, it can indicate silage quality has dropped, grazing management needs to be reviewed or an adjustment to the ration is needed, explains Mr Richards.

He advises the correct time to sell a beef animal is when the cost of adding the final kilogram of weight equals the sale price of that kilogram.

“Up to that point, each additional kilogram has a positive, albeit diminishing, margin over time,” says Mr Richards.

EID is set to become compulsory, but there are advantages to using this technology ahead of the compulsory deadline.

The Farming Connect project has now concluded, but Mr Evans says EID has become a permanent part of his system.

“At the start of this project, I said that using computers wasn’t my strong point, but I have seen the benefits of using EID,’’ he says.