For beef farmer Robert Neill, technology is central to how he manages his system at Upper Nisbet Farm, Jedburgh.

He knows precisely what is going into to his animals and how they are performing, which is allowing him to market his stock at exactly the right time and specification in order to maximise profits.

Animals are mostly sold live through the local auction mart, with a handful sold deadweight to ABP. He has a steady supply of customers, with butchers purchasing one to three of his animals 52 weeks of the year. 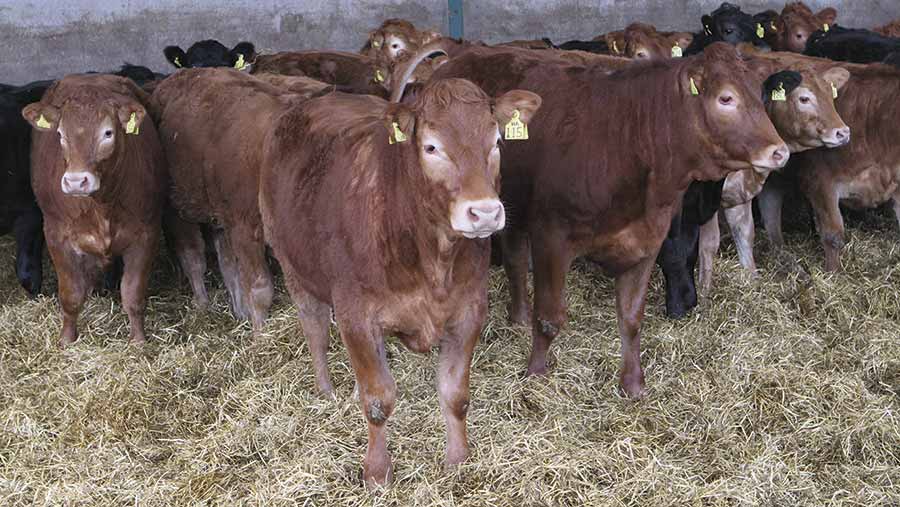 He is averaging about 2.20p/kg liveweight for a 600kg carcass and says the secret to getting the most from his stock is producing what the market wants.

Mr Neill has adopted precision farming to help him make informed decisions and believes this is what all farmers need to be doing.

“In Scotland, only 20% of beef farms have weighing equipment. If you can’t weigh animals, how can you market at the right time?” he asks. 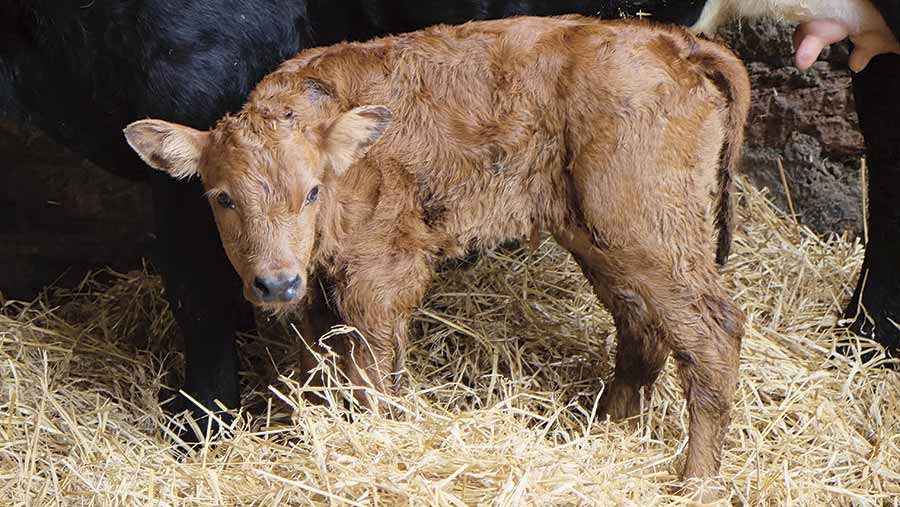 Mr Neill says using EID across all his animals and having a good handling and weighing system is central to his beef enterprise.

“The weigh bars and weigh head are the most beneficial thing to my farm,” said Mr Neill at Farmers Weekly’s Rethinking Cattle Performance event, sponsored by Zoetis, ABP/Blade and Volac.

He is weighing finishing animals at least every 30 days to make sure they are not going over 600kg (640kg minus 40kg of gut fill).

Calves are also weighed at weaning when they are about six months old. Any that are not at 200kg at weaning are separated and continued on creep feed.

Mr Neill  also has two automatic weigh crates situated at water drinkers, which measures the weights of his growing and finishing animals every time they go for a drink.

He is also awaiting cameras to be installed above the drinkers to take conformation scores at the same time too.

“Regularly weighing animals allows me to look at diets and make sure they are working, decide when to market animals and to hit spec. This is precision agriculture,” he said. 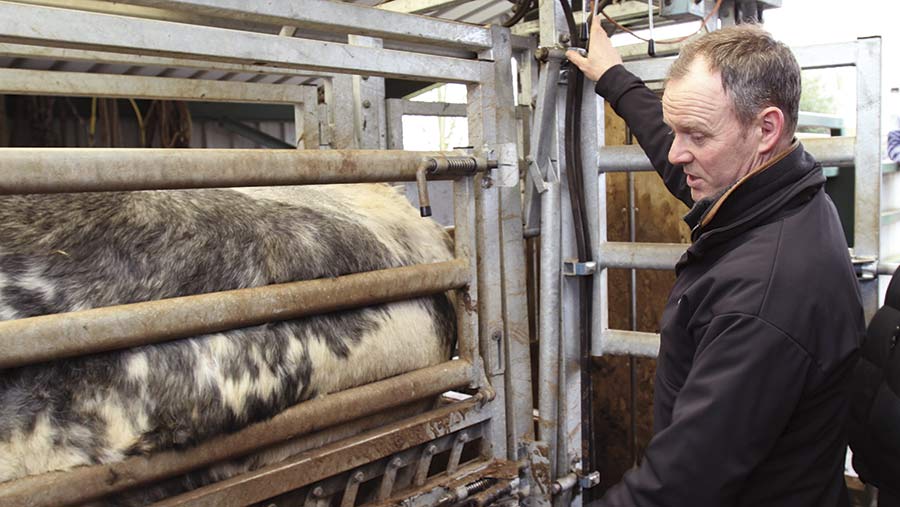 Mr Neill can weigh 40 cattle in 10 minutes on his own and can shed cattle three ways. He has software that analyses results, hardware for taking reading and EID tags for identification.

“We use Farmplan Cattle Manager for record-keeping. The animal weights are imported from the weigh system and births and movements automatically notified to BCMS through the programme.”

His handling system, which is designed to be safe and minimise animal stress, has a gate that slowly guides the animals through the system. He has installed a squeeze crush rather than a crush with a head yoke to keep animal stress to a minimum.

“I don’t want to go to the head of the animal to read the eartag, as it upsets them.

“The EID reader attached to the system means I don’t have to.”

He also has air-operated gates, making it easy to get stock in and out of the crate. It is also quieter.

“If you are going to handle stock, you need a good weigh system. If you handle an animal badly, it has a knock-on effect on growth rate.

“There is never going to be more labour on farms, so you need to think of that when designing a handling system,” he said.

When stock is run through the handling system, the EID reader situated on the crush picks up their tag and will give a daily liveweight gain. It will also tell you specific animal details such as their date of birth, past issues, medicine records and whether an animal can be sold (taking into account meat withdrawal periods from past treatments). 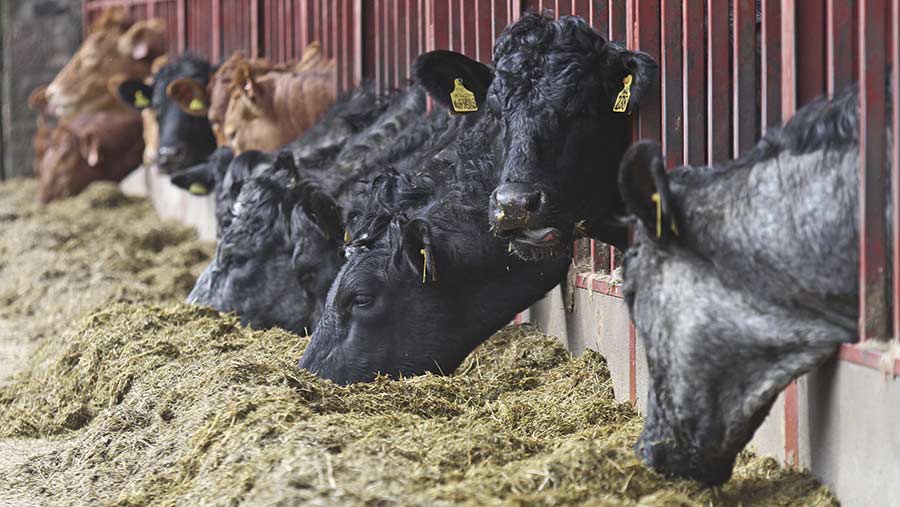 His system is also linked up to a labelling machine that can print individual animal identifications. This has proved particularly handy when taking blood samples from cows, said Mr Neill.

“This has speeded up the process and reduces human error,” he said.

Mr Neill said before going to market he weighs and clips the back, belly and tails of his cattle so they look their best.

“It takes five minutes to do. It’s all about marketing and selling and we need to present what we sell in a better fashion, “ he said.

Mr Neill is also trialling a body condition score stick reader for TRuTest and believes being able to record condition scores at the penside straight to the reader will make fine-tuning easier. 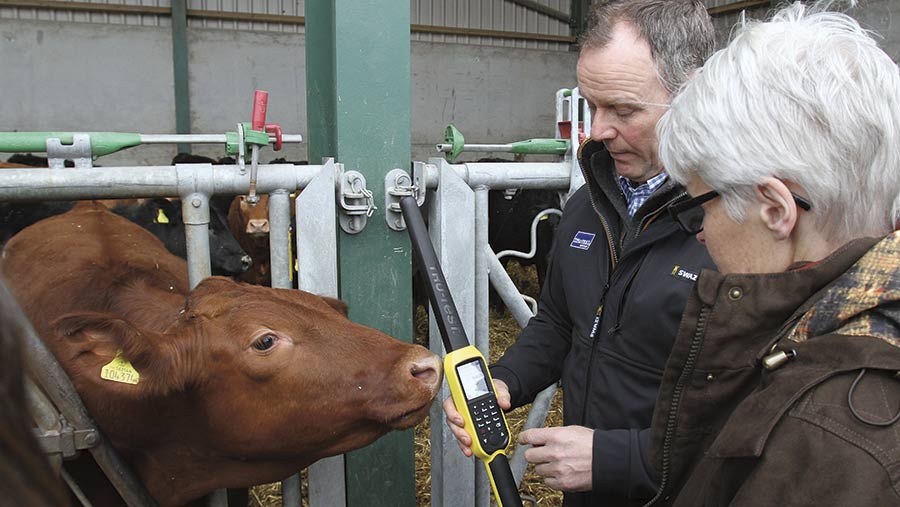 However, precision farming doesn’t mean splashing out lots of money on bits of kit. Basic routines, such as using management tags and recording the sire initials on the tags, help Mr Neill make decisions about breeding in the future.

“We use colour-coded management tags to make the job easier. For example, red disks highlight heifer calves we don’t want to keep as replacements and blue disks are used for males that haven’t been castrated.”

Mr Neill is using an Alltech Keenan feeder wagon with PACE system attached. This tells him exactly what needs to go into the diet and how long it needs to be mixed for, so he knows exactly what stock is being fed. He can then fine-tune the diet by keeping a close eye on the performance of his animals.

Richard Vecqueray from Evidence Based Veterinary Consultancy, who was speaking at the event, said farmers have a number of levers they can pull to determine the performance of beef cattle to help match the farm’s genetics with the market being targeted.

He said to be able to correctly pull these levers, farmers need to know:

“Only by measuring animals and knowing exactly what is being fed, can you fine-tune the system.”

“Using computer formulation with substandard information [a one-off NiR silage analysis] is an expensive waste of time. The likely result of such an exercise is you being sold something completely inappropriate, adding unnecessary cost in an industry with no margin to spare,” he said.

“If you are only doing one or two silage analyses a year using NiR, which analyses silage by looking at the level of reflected light, it is not likely to be representative of the silage you are feeding.

“If you really want to fine-tune and push growth rates at a younger age then you may want to invest in more forage analysis or the gold standard, which is wet chemistry analysis. Wet chemistry is more expensive, but more accurate,” he said.

Information from AHDB Beef and Lamb