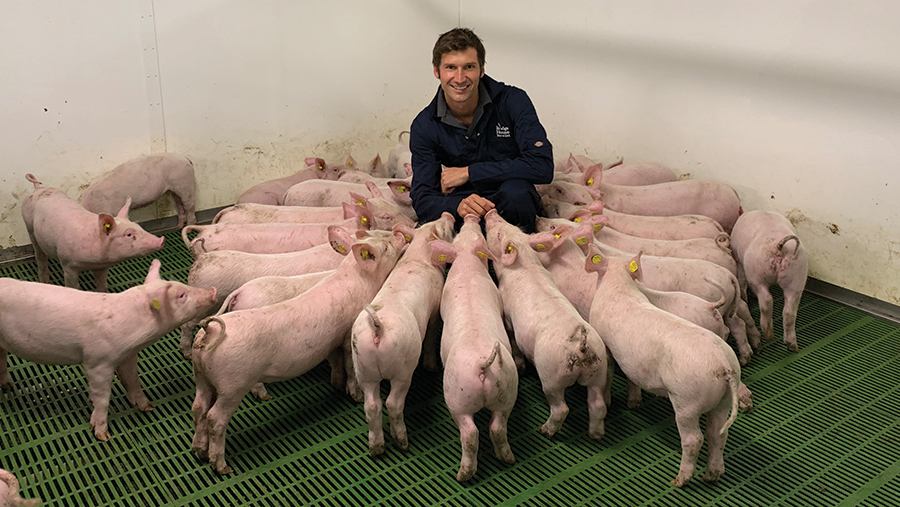 Pig farmer and vet Charlie Thompson, Bridge House Farm, says EID is a tool he could not live without – it is helping him to manage breeding decisions, monitor performance and locate pigs with 100% accuracy.

Mr Thompson, of Bridge House Farm, Northamptonshire, started using the technology in his farrow to finish 650-sow herd in 2018 after exploring different options to improve data collection and accuracy.

Being a nucleus herd, identification is key to the whole system, with every piglet on the farm individually monitored for growth from the minute it is born.

As a purebred herd supplying breeding stock for Genesus Genetics, Mr Thompson, who farms with his father Robin, was already collecting a lot of data. 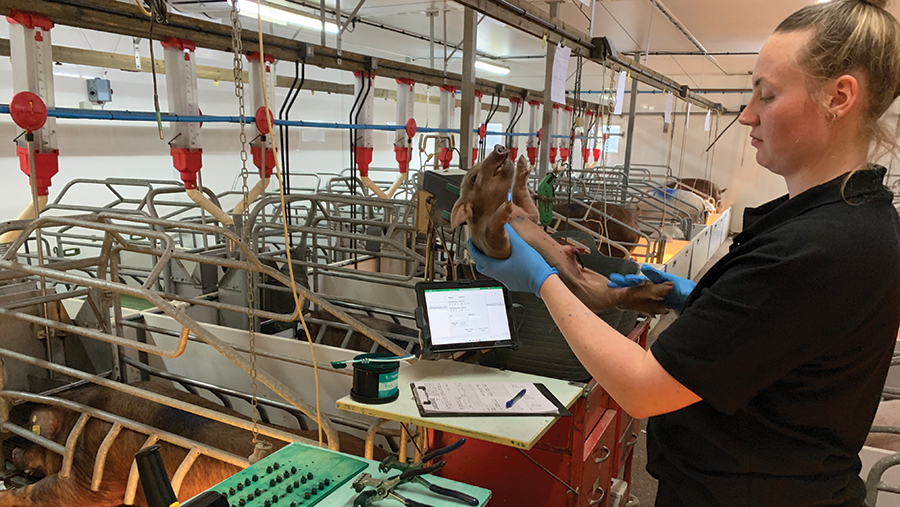 Individual identification of pigs is key to their system. Prior to EID all the data was recorded manually and then typed onto farm software. Now it is done automatically.

Mr Thompson says: “It was time consuming as all that data had to be manually typed back out onto a computer at every time point a handling or performance measure occurred. ”

Errors were unavoidable when writing down hundreds of IDs manually but now it is all done automatically.

The data is sent to Genesus in Canada who calculate individual pig EBVs by comparing the performance of every animal on the farm and every animal in the Canadian nucleus population.

This allows them to select high performing boars for customers with specific performance traits, such as growth rates, feed intakes, loin depth and many more.

Why EID is useful on pig farms

Unlike sheep and cattle EID tags, which use a low frequency (LF) range, Mr Thompson opted to use Ultra High Frequency (UHF) technology.

UHF tags allow identification of individual animals and at a distance, as well as bulk reading of groups of animals quickly and simultaneously.

The UHF tags used at Bridge House Farm are light and use a thin 3mm pin, which means they can be used from birth (even in very small pigs).

Retention rates have been good with only one in every 2,000 getting lost. In fact, out of 10,000 piglets tagged so far this year, Mr Thompson hasn’t had a single animal lose both tags.

Overall, tag cost has been kept around the same as the larger management tags which were used prior to EID have been removed from the system.

It is a cost Mr Thompson can justify as he reckons by not having to retype data into Excel he is saving at least a day a week. It has also made regular tasks a lot quicker, safer for pigs and staff, and more accurate.

Mr Thompson has been able to easily highlight some exceptional performing animals.

He says: “This week we found a Duroc boar that weighed 113kgs at 120 days old. Having clear and accurate data has allowed us to select him and he will be used to produce our next generation of progeny.”

“Andy Brown, our unit manager, has the 1,000g average daily gain per day from birth in his sights and I can see us achieving that given the current trajectory.”

EID also allows Mr Thompson to easily see the affect of any changes. For example, a change to some feed hoppers  saw weaning weights increase by 0.5 kg a pig.

Finding herd replacements within pens has also been made easier.

With EID, animals can be clearly identified, even if their tags are filthy, taking less than 30 minutes while quietly walking around the pen. 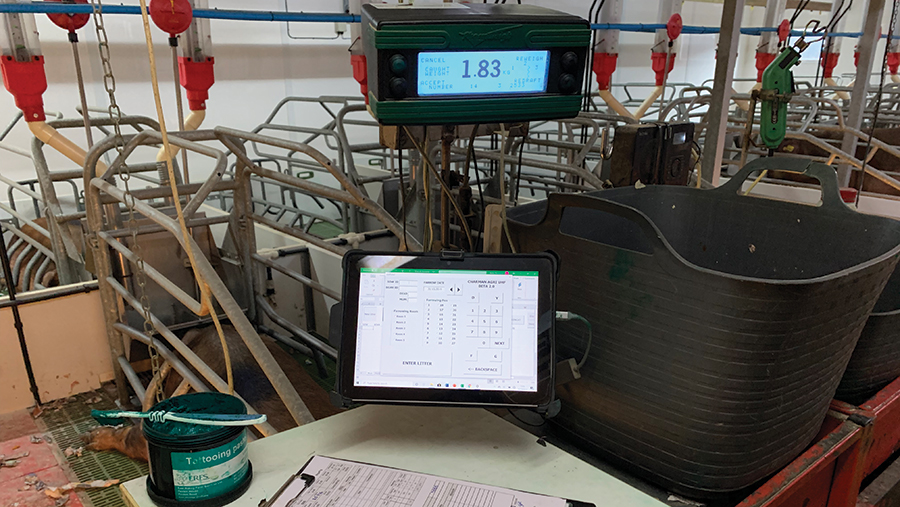 How data recording works with EID

Newborn piglets are collected into clean, processing buckets and placed on the scales.

The weigh scale is set so it creates a positive weight on removal, so every time a piglet is removed from the weigh scale it automatically records their individual weight.

As they are weighed their ear tag is scanned using a fixed EID scanner like that used in a supermarket to scan barcodes.

The weight and pig EID number are then automatically recorded onto a tablet. At the same time, piglets are given two tattoos in their ear, just in case all tags are lost, which enables full Canadian pedigree registration.

At weaning, when they are vaccinated, they are weighed individually again. It takes on average just nine seconds a pig to weigh and vaccinate them with the information automatically captured on the tablet.

Once they reach 100kgs, pigs are run through a weigh system for individual weights. They are also individually assessed for their breeding structure, including legs and conformation.

At this point they are also ultrasound scanned for the depth of fat and length of loin which gives an approximate estimation of their lean meat yield.

Every Duroc boar is also scored for Intramuscular Fat (IMF) or marbling which can be used to deliver improved flavour and texture to pork meat.

Mr Thompson has trialled using fixed EID readers and hopes to be able to install one into each corridor of the shed in the future.

This will allow him to track any pig/group movements as they move between each stage of production.

He says: “The benefit of UHF tags is they can read large batches very quickly and from a distance. Having fixed readers in the corridors and being able to bulk read tag numbers will allow us to use it as an inventory system so we know where every individual pig is on the farm.”

This means that when they have a buyer looking for a specific boar with certain traits, it can be easily identified and located on the computer.

At present, Mr Thompson uses a trigger action tag reader. It works in the same way as a metal detector.

You type in the tag number you are looking for into the reader and as you are nearing the pig the beeps get faster until you find it.

Although there are no pig abattoirs that have the facility to read EID tags, Mr Thompson hopes it is something that will come.

“It would be good to get the full picture so we can see how those animals killed out, and verify how accurate the lean meat yield measurements are that we take at 100kgs. This will also help to develop breeding stock that produces a product the market wants,” he says.