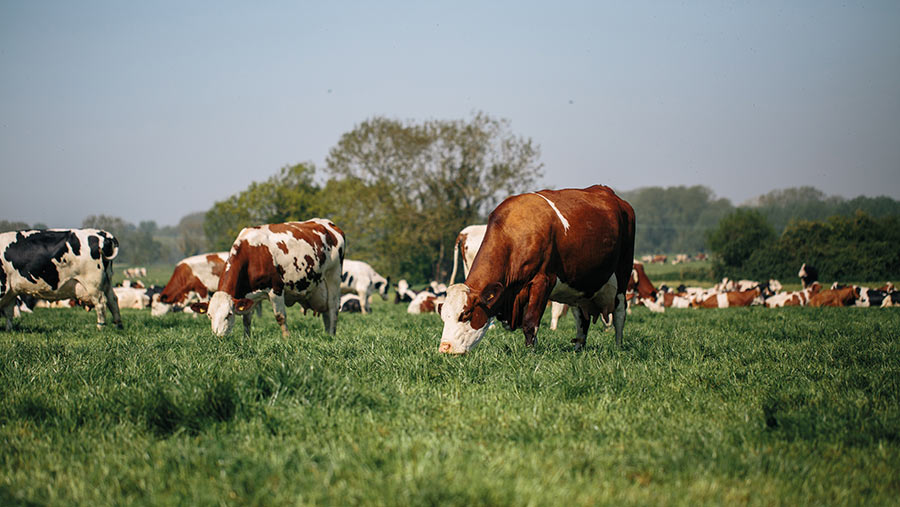 Close monitoring of daily production and producing more milk from forage have enabled a Suffolk farmer to reduce concentrate use by almost one-third.

In 2019, Jonny Crickmore was comparing the performance of his 300-head herd of Montbeliarde cows at Fen Farm, Bungay, against the AHDB Comparable Farm Profit (CFP) model when he identified a potential opportunity to boost margins.

“I was looking at farms that had a similar business model to ours in terms of cows, calving [pattern] and so on,” he says.

“I noticed that their concentrate usage was a lot less than ours, but milk yields were not too dissimilar.

“This, as well as being part of an AHDB grazing group, gave me the confidence to think about pushing our cows a little more – with the aim of getting more milk from forage, and subsequently being able to drop our concentrate usage.”

Watch the video of Jonny talking about the benefits of joining the group and read the full report below.

At the time, Mr Crickmore was feeding about 12kg of concentrates a cow a day. He was hesitant to drop this significantly straight away.

“I felt that we first needed to measure properly what we were doing and then we would be able to see how any changes impacted our production,” he says.

“We needed to consider multiple factors such as yield, cow health, and fertility as we did not want a change in diet to hinder this.”

The first step was to buy a flow meter, which was fitted to the parlour, and record input (concentrates) and output (yield) daily on a spreadsheet he set up.

“We have an autumn- and a spring-calving herd, so we measured production and input for each block to manage any difference separately, if necessary.”

“Initially, we dropped from 12kg to 10kg a cow a day. While the yields fluctuated for the first day or so, they quickly corrected themselves to previous levels.”

He continued reducing concentrate input, while quantifying his decision using the spreadsheet.

“The way we set it up, one column looked at the value of the milk yield that day, and next to it, the cost of the concentrate fed to the cows daily.

“As we dropped the concentrates, though the milk value column moved up and down slightly, there were greater savings [from using fewer concentrates] than there would have been from the value of more milk produced.

“Essentially, we were saving more in inputs than we would have been gaining from output.”

There were further benefits to daily monitoring of the grass-based, rotationally grazed herd.

Mr Crickmore and his staff could look at finer details, including from which paddocks cows milked best. This has been fundamental in getting more from forage, he says.

“We record which paddock cows are in on a daily basis. This has allowed us to see, for example, that the herd milks particularly well in paddock 26.

“When we looked, we could see this ley had quite a bit of clover in it. We have been able to use this information to make better decisions when it comes to reseeding.”

Mr Crickmore adds that the best production is seen on the more modern, mixed-species swards. 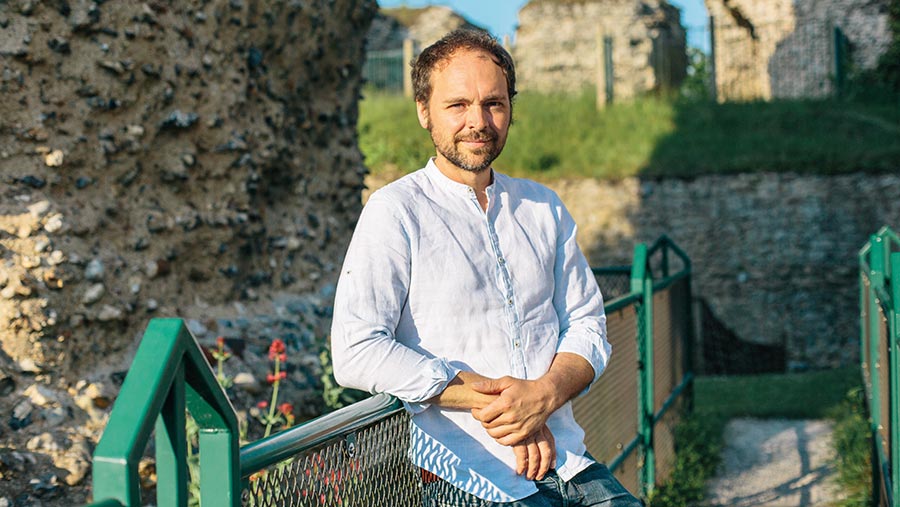 “This particularly includes grasses such as cocksfoot and timothy, as well as clover and plantain. The data proves cows perform better on these leys.”

The grazing season runs, on average, between mid-March and November, with the spring-calving block staying out longer in the autumn and the autumn calvers going out earlier in spring.

A small quantity of nuts is fed in the parlour – about 1kg/day when cows are out day and night. The rest of production comes purely from grass.

Plate metering is carried out on a weekly basis to ensure the farm is accurately keeping on top of the available grass levels.

In the winter, forage is also key, with the herd fed a combination of maize and grass silage and an average of 8kg a head a day of concentrates.

“The beauty with the daily monitoring is that if, for whatever reason, the yield starts to drop, we are able to quickly reformulate the feeding to ensure that small issues do not become big problems.”

“There are a lot of factors that affect production, and it is important to get these basics right before playing around with the diet.”

He says this includes the quality and availability of water and feed. For example, porcelain tiles have been laid on top of concrete at the feed face to keep the feed cooler, reducing the risk of spoilage.

“The spreadsheet data has shown us that if the person milking the cows that day is slower and quieter, they give more milk,” explains Mr Crickmore.

The timing between milkings has also been proven to make a difference.

“We record the exact time of day milking was started – both morning and afternoon – and have found the yield is best when [the cows are] milked as close as possible to a 12-hour split.

“At the weekends, when milking tends to be started a little earlier, this was making about £100/day difference in milk value, compared with weekdays.”

Together these changes have allowed Mr Crickmore to push the herd’s ability to yield more milk from forage.

Now the herd is fed on average 8.5kg a cow a day with little impact on overall yields, which are currently averaging 8,100 litres.

Looking at the 2019-20 winter, when the changes were first implemented, the reduction resulted in a cost saving of more than £30,000 in concentrates, he says.

“We are continuing to monitor the multitude of factors relating to daily production. It is an incredibly efficient, quick way of keeping on top of exactly what we are doing,” he says, adding that once a system set up, daily monitoring is very easy.

“In the future, I would like to grow more food on farm and reduce our reliance on bought-in concentrates further.

“I do not think we are far off where we want to be in terms of yield and inputs, but balancing the ration to ensure cows are happy, healthy and cost-effective is a fine art.”