DEFRA has announced that the current case of avian flu (also known as bird flu), confirmed on 12 November on a turkey farm near Redgrave, Diss, on the Norfolk/Suffolk border, is the highly pathogenic H5N1 strain of the disease.

Watch the story unfold through the latest FWi avian flu headlines. Plus there’s advice on this page on what it means for farmers and the general public.

And you can also find more in-depth information and advice about avian flu in the UK and across Europe in FWi’s Avian Flu special global report or our top biosecurity tips to help keep the virus out of flocks.

What area is affected by the restriction zone?
Below is a map of the area affected, showing the 3km protection zone, 10km surveillance zone and total restricted area. Click on the map for DEFRA’s updates on the latest situation: 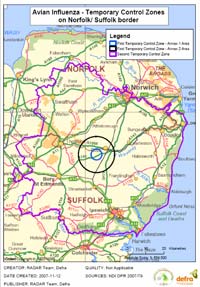 What do the zones mean?

What does bird flu mean for farmers and the public?
Click here for general information on the H5N1 strain of bird flu, including what the signs of the virus are, how you can catch it and what you can do to maximise biosecurity.