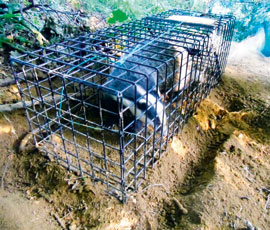 More badgers than expected must be killed for a cull to be deemed successful in south-west England, it has emerged.

NFU vice president Adam Quinney said that the union was being asked to cull 80% of badgers in the two pilot areas of west Somerset and west Gloucestershire.

Doing so would ensure that marksmen stood a better chance of culling 70% of badgers within the cull zones, which is the minimum target required to minimise the threat of fleeing badgers spreading TB to other areas.

A final decision is expected shortly on when to proceed with the badger cull, which is aimed at combating bovine tuberculosis in cattle.

DEFRA denied that the target had been increased. “This is nothing new,” said a spokeswoman.

The badger population had been estimated and the target set so it equated to culling 70% of the true overall population, she added.

Official statistics suggest higher than expected badger populations in both of the cull zones.

Farm minister David Heath revealed last week that the “best estimate” for badger numbers in the cull areas was 3,600 in west Gloucestershire and 4,300 in west Somerset.

This is twice as many as first thought in the west Gloucestershire cull zone and about 60% higher than the original estimate for west Somerset.

The higher than expected badger populations in both areas – and the higher cull target – will make it harder to take out the numbers required before a closed period on cage trapping begins.

Contractors tasked with carrying out the cull must also contend with wet autumn weather.

Badgers will be culled using a combination of cage-trapping and free shooting. But a closed period on cage-trapping, which begins on 1 December, is now less than six weeks away.

Although badgers could be shot after 1 December, cage trapping would be outlawed after that date, making it making it harder to cull enough animals to reach the target.

One industry source told Farmers Weekly: “We have one chance to get this right – if we don’t, we won’t get a second opportunity. It is important we show that culling works.”

The NFU said pre-baiting of badger setts in both areas had been carried out successfully.

Contractors were “keen to get on” with the cull but had reported fewer badgers on the ground than official stats would lead them to expect, said Mr Quinney.

Photos said to show pre-baited badger setts were published on the internet by animal rights activists on Sunday (21 October).

Meanwhile, the Badger Trust has sent a last-minute legal letter to Natural England, arguing that cull costs are soaring out of control, with little benefit for farmers.

The trust, which favours vaccination to control bovine TB, also argues that the cull poses major risks for members of the public in the cull zones.

A Natural England spokeswoman confirmed to Farmers Weekly that the badger cull licence criteria were “very well advanced” but still not fully met.

However, the criteria could be met at any point.

Natural England was considering the contents of the Badger Trust letter and would respond in due course, the spokeswoman added.