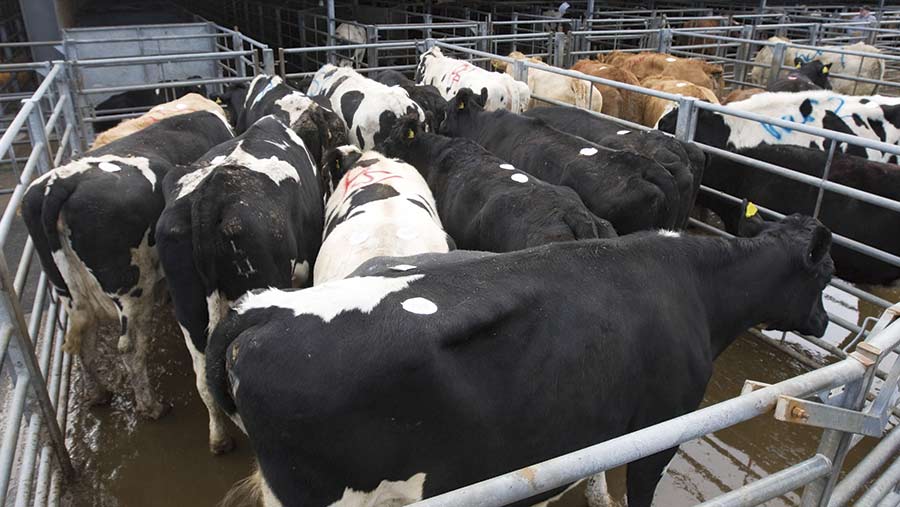 Elevated culling during the UK dairy downturn (2015-16) and the government-enforced Dutch cow cull has removed cows out of the European manufacturing beef supply chain early, leaving gap in the market.

Last year, about 200,000 Dutch cows were culled as farms were ordered to destock to 2015 levels, stopping any post milk-quota expansion plans in their tracks as part of a national effort to reduce phosphate pollution.

This is according to AHDB Beef & Lamb markets analyst Rebecca Oborne, who said March prices were at a five-year high, and were beating July 2013 levels.

Numbers of cows going deadweight is up 7-8% on the year but liveweight numbers are tighter across Great Britain, says AHDB records. Deadweight prices have tracked about the 255p/kg mark since late February, leaving prices 30p/kg up on the year and 20p/kg up on the five-year average.

Sandy Moore of Lawrie and Symington told Farmers Weekly that tight manufacturing beef supplies, particularly in Ireland, had added to demand for the past four or five months at Lanark.

“Manufacturing beef is clearly in demand and this has been boosted by one or two cows going over to Ireland, which is helping prices,” said Mr Moore.

He said that, with prices so strong, fewer people are buying feeding cows at Larnark.

“Last year there were more people buying barrens to add weight, but there are less this year just because of how dear they are to start with, it’s more of a risk.”

Lanark’s cull numbers range from lows of 70-head to highs of 140-head around September and October time, with half the entry typically being dairy cows. Monday’s sale saw 80 cows through the ring, of which 80% were dairy culls.

Trade has also been flying at Darlington, where market manager and auctioneer Andrew Armstrong says demand is sufficient for almost twice the number of cows.

He believes a weak sterling is keeping EU-produced manufacturing beef out of the UK, while local farmers running efficient finishing units are buying barrens as feeding cows, which is helping to underpin trade.

“I would say trade has been flying for the last six months,” says Mr Armstrong. “We are seeing Irish buyers taking cows up to Stranraer and demand for feeding cattle is really good here, with about 30-40% of cows sold as feeding cows, going to farmers for finishing.

“Farmers can come down from Weardale with a 700kg barren cow and be content with 130-140p/kg at 700kg, which a beef finisher can look to add condition to.”