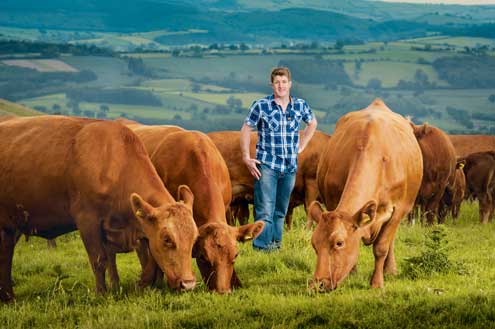 Ease of management, a focus on the maternal line and innovation link all of this year’s finalists for the 2012 Farmers WeeklyBeef Farmer of the Year Award. All of them have overhauled their businesses in recent years and proved that a focus on performance figures and costs can really benefit the bottom line

James Evans is proof that drilling down on farm costs and focusing on EBVs can bring significant benefits to farm profitability. For James, signing up to a contract farm agreement with an ex-accountant 12 years ago has been one of the main driving factors in a complete herd overhaul which has helped boost profitability. “Nothing focuses the mind more than having to constantly prove what you are doing is profitable and works in terms of facts and figures,” he says.

Traditionally he had been buying Limousin x Holstein heifers and using continental bulls to produce store cattle. However, although they were achieving good prices at market, it was costing a lot to produce them. “Rather than focusing on the end product, I needed to concentrate on the most important thing – herd profitability. And that meant getting cows in calf and producing a low-birth-weight calf that needed no assistance.”


It was on a study trip to Cumbria four years ago that James had what he describes as a “eureka moment” when seeing the benefits of using Stabilisers and, in 2007 his first bull was bought. After seeing his management difficulties disappear he decided to move everything over to Stabiliser. The business now has two herds over two units – a 160-cow spring-calving herd at Partridge Farm and a 90-cow autumn-calving herd at Walcot Farm. “We’re now getting more cows in calf and rearing more calves, so although individual value may have reduced, the profitability of the business has gone up,” says James.

He is selling quality breeding heifers into the Stabiliser pyramid, all produced off a forage-based system. Steers are sold at 12 months of age. Males in the top 10% EBVs for the breed are also left entire and sold at 14 months as breeding bulls – creating an added income stream. The whole herd is performance-recorded and heifers and bulls are selected on their Maternal Production Values. “One of my main targets is to produce a low-birth-weight calf that has a high growth rate. I am a strong believer in EBVs,” he says.


James has worked hard to maintain a tight calving pattern with 60-70% of cows calving in the first three weeks of a nine-week calving period and a calving interval of 355 days in the spring herd and 362 days in the autumn herd. “This has been achieved through strict culling, semen testing and only leaving the bull in for 10 weeks,” he explains.

Currently the spring herd has a gross margin before fixed costs of £429.61/cow and the autumn herd, £585.93/cow. James is a member of the NFU Next Generation Policy Forum. And, as part of the EBLEX Progressive Beef Group and as an EBLEX/ADAS Monitor Farm, he is also aware of managing a system which best suits his farm and is focused on figures. The key efficiency target for calves is a 200-day weight that is 50% of the cow weight put to the bull. And as a member of the Net Feed Efficiency steering group for Stabilisers, James is also helping co-ordinate a project that will generate feed efficiency EBVs and improve suckler herd efficiencies.

Herd health is fundamental to his system, and the herd is part of the SAC Premium Health Scheme. Stock are wormed based on faecal egg counts. Both units are part of various environmental schemes with Partridge Farm involved in the Back to Purple scheme, which restores heather back to the hills.

Environmental schemes make it difficult to manage grassland, but James does all he can to get the most from what he has. “I have started a 10-year project of overseeding and reseeding, and selecting grass mixes depending on field type. We’ve also invested in a machine to help eliminate soil compaction and promote aeration.” Cows are generally paddock grazed on 20-acre blocks to make the most of grass and ground is soil tested which has allowed a 50% reduction in fertiliser costs. James is also putting up a new shed which will provide him with the flexibility of adding 50 more cows or deciding to finish stock.

McDonald’s buys beef from more than 16,000 British and Irish farmers each year and we’re committed to working with these farmers to ensure they have a successful and sustainable future. We are therefore proud to once again support the Farmers Weekly Beef Farmer of the Year Award.”