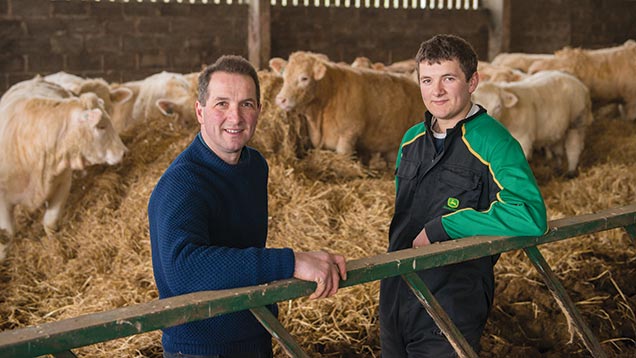 Since undertaking a BVD control programme, Mr Walker has seen fewer cases of calf pneumonia and consequently reduced antibiotics use and enhanced growth rates, which
should mean improved profitability.

“We’ve probably reduced finishing times by two months. It might be linked to feeding as well, but over the past couple of years we’ve got calves away earlier every year. Antibiotics use is also just about non-existent,” he says.

All calves are reared on farm until 12 months old before going to a separate unit for finishing by his father. About 30 dairy calves are also purchased every year for finishing.

BVD was first identified on the farm’s radar about four years ago, when barren rates in the spring calving herd started to increase.

With calves weaned and housed in November, Mr Walker was also having to treat higher levels of calf pneumonia around Christmas.

“Calves were getting vaccinated for pneumonia, but they weren’t looking healthy or as well as they could and antibiotic use was too high considering we were vaccinating,” says Mr Walker.

Mr Walker’s vet, Iain McCormick, from Galedin Vets, was suspicious calves were immunosuppressed due to exposure to BVD.

This may have been due to the existence of persistently infected (PI) animals, which are one of the main causes of BVD transmission.

A PI animal is born shedding BVD and is produced when its dam is infected with BVD in the first 120 days of pregnancy or if the dam is a PI herself.

Mr McCormick explains that housing can be a particularly risky time when it comes to BVD spread if a PI is present.

“When calves are weaned into buildings, you get a lot of nose-to-nose contact and tend to see greater spread of BVD and more immunosuppression, which triggers pneumonia,” he says. “Generally if a farmer solves a BVD problem, they tend to get less pneumonia.”

To start with, Mr McCormick looked at stocking rates, ventilation and vaccination protocols. A series of tests were then undertaken to establish BVD status.

Blood samples from 10 calves aged over nine months tested positive for BVD antibodies, which showed they had been exposed to BVD. As a result, all cows and heifers were blood tested for BVD virus to identify any PI-positive animals.

Although these tests came back negative, Mr McCormick says it is likely a PI had been in the herd at some point and consequently exposed animals to BVD.

To prevent PI animals from being introduced in the future, a whole-farm risk assessment was undertaken.

This identified bought-in animals as the main risk of BVD introduction. As a result, Mr Walker has reassessed his purchasing policy.

“It’s important to protect myself against BVD and that’s why we now only buy from a known source and anything that comes on farm gets tested,” he says.

Dairy calves are now bought direct from farm rather than at market. All replacement heifers are also purchased from two farms of known status.

See also: A look at the UK strategy to eradicate BVD

To be certain purchased calves are not PI positive, they are all tested on arrival. This method uses specialist ear tags, which automatically take a tissue sample that can be tested for BVD.

Replacements and bulls are also tested and all purchased animals are quarantined until test results are received.

Breeding stock has always been vaccinated for BVD, but Mr McCormick explains that now the farm is identifying and culling any potential PIs, the vaccine should be more effective.

“Even if you vaccinate a PI, she will always produce a PI calf and you can’t rely on vaccination on its own. To become BVD-free, you need to get rid of PIs, have good biosecurity and vaccinate,” he says.

As part of the Scottish BVD eradication programme, ongoing yearly “check tests” are now being undertaken at Blackburn Farm to ensure BVD is not circulating. This involves sampling five animals over nine months old from each management group for BVD antibodies.

Mr Walker was going to test for BVD anyway before the national Scottish eradication scheme was introduced, however he believes the scheme will benefit all farmers.

“It’s definitely a positive step in Scotland to help the health of animals and the profitability of beef and dairy herds,” he says.

BVD is the most common viral disease affecting cattle. Despite vaccines being around for 50 years, the disease is still thriving.

A new vaccine launched by Boehringer promises to be easier to use and, with a one-shot primary course and protection against BVD virus type 1 and 2, has many unique features that will prove helpful.