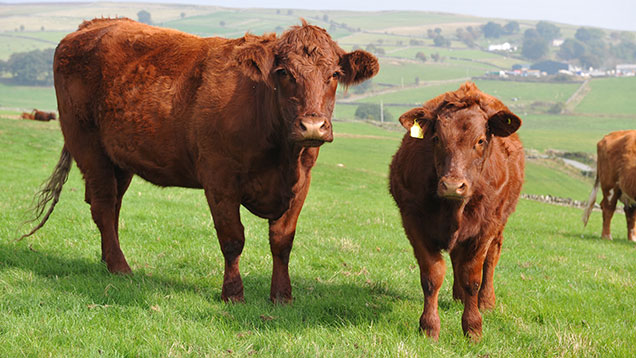 A recent Eblex-funded study looking at the breed makeup of the British suckler herd shows more farmers are opting for Luings. Debbie James visited a farm who have converted to the breed.

A suckler beef enterprise is achieving annual cost savings of £300 a cow by converting the herd to a breed well matched to grazing marginal land.

Iwan and Eleanor Davies had been running a herd of Continental breeds at Hafod y Maidd, a Denbighshire hill farm which rises to 1,400ft and falls in a Severely Disadvantaged Area.

“We have been asked several times why Luings and not another breed and the answer to that is that we liked the Luing’s classification scheme.

“It is well established and emphasises the characteristics of the dam more than any other breed,” says Mr Davies.

“With the right breed we can out-winter more stock rather than spend money on housing.”

The Davies bought the first Luings 18 months ago and say there is already a significant financial benefit.

“The cost savings a herd on the mature cattle is quite significant, about £300 a beast,” says Mr Davies.

“We can winter graze the cattle on marginal land which works out at £60 a head compared to £260 a head in our housed system.”

He estimates savings of £100 a head in fertiliser costs.

“The Luings graze our marginal land on the mountain so we have been able to cut back on fertiliser inputs. The breed thrives on poor forage, it takes a bit off their backs but they get back in calf and produce milk.’’

Mr and Mrs Davies have taken a gradual approach to converting the herd. They want to buy the best stock they can afford and build up numbers slowly.

Although the initial outlay is higher, they believe they will be rewarded through lifetime performance.

Initially, 20 bulling heifers were purchased and numbers have been built up by sourcing the best-quality cows and calves and in-calf heifers.

“We are still adding to the herd,” says Mr Davies

. “We bought two in-calf heifers and two bulling heifers at the pedigree Luing show and sale in Castle Douglas in February.’’

The in-calf heifers were the champion pair in the pre-sale show and they were sold for 2,700gns each.

In addition to the Luings, there are 45 Continental suckler cows still in the herd but these will be sold as Luing numbers increase.

Not only have the Luings generated cost savings, their meat is attracting a price premium of £30/kg deadweight too.

Until recently, the meat was sold to the Bodnant Food Centre but the Davies launched their own website last month and are now marketing the meat, targeting hotels and other food service outlets.

“The meat has a sweet, nutty flavour and is very tender with a good level of marbling. We gave out some taster samples at the Royal Welsh Winter Fair and we were very pleased with the feedback,’’ says Mr Davies.

The herd calves in April. “We have had no calving problems, the calves get up and suckle immediately,” Mr Davies reports.

Cows and calves are turned on to the marginal hill land to graze immediately after calving with calves weaned in November.

“We weigh regularly and all the calves are weaned off their mothers at 55% of their mother’s weight. Our aim had been 50% but they are achieving 55%,’’ says Mr Davies.

After weaning, the calves are housed while their mothers go back on to the hill on deferred grazing until the beginning of February.

A high percentage of the land is classed as rough grazing but the cows don’t need to be supplemented with silage until 1 February. Until then they are topped up with 2kg of concentrates from the beginning of December.

From 1 February they receive silage to top-up the grazing and at the end of the month they are moved to lower ground to graze swedes before calving.

The cattle are finished off grass at 18 months, achieving a deadweight of 320kg and U and R grades. “That comes from buying the best stock,” suggests Mr Davies.

He is aiming for high herd health status, testing cattle for BVD, leptospirosis, Johnes and IBR. All the cows will be tested annually with a pro-active approach to culling animals that test positive for disease.

According to a recent EBLEX-funded study looking at the breed makeup of the British suckler herd, more farmers are opting for Luings. Mr Davies understands why.

“What really matters in suckler beef production is how much money you make out of the herd, the cost of producing each kilogramme of meat is what matters.”