Beef and arable farmer Robert Neill expects steers and heifers to average a minimum of 1kg daily liveweight gain from birth to slaughter, with bulls finished from 12 months, steers from 14 months and heifers from 18 months.

By using an automatic weigh crate system, Mr Neill has steadily improved weight gain performance in his Limousin-Friesian cross cattle, while managing the sale of over 200 fattened cattle a year, targeting the late summer market rise. 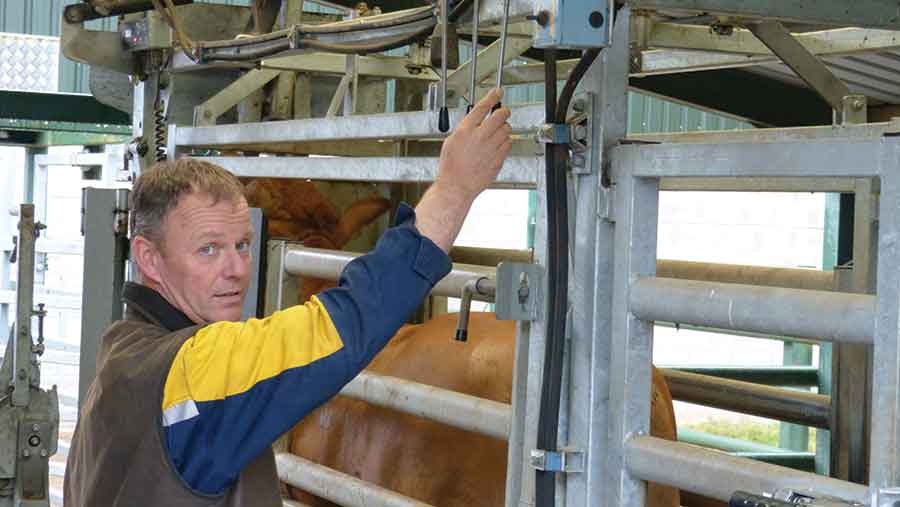 “Back in the 90s we weren’t averaging near a kilo a day,” admits Mr Neill, who started weighing cattle in 1997 and continued in 2000 when he started a tenancy at Upper Nisbet, Jedburgh.

“Now some animals in batches are doing around 2kg and heifers are doing 1kg/day and more off grass before the finishing ration without concentrates.”

Knowing exactly how store cattle are developing and where feedlot gains are suits Mr Neill’s local market at St Boswells, where he has built up relationships with family butchers.

A typical week sees four to five cattle taken to mart, although at certain times Mr Neill adjusts finishing periods (gauged at a 90-100-day maximum) and faster finishing cattle to target an expected rise in the market (August to October).

Similarly, the new year glut of cattle is minimised with only two animals going to mart in a typical week around January and February.

Since moving to the Lothian Estates farm, he has identified five bulls that have been failing from a weight gain standpoint and removed them from the breeding programme.

Meanwhile, by analysing data and diligently performance recording his own small pedigree Limousin herd, Mr Neill now has the confidence to market his own bulls and use his own Limousins on his 300-head commercial Limousin-cross Friesian herd.

“For around 10 years I paid anything from 3,600gns to 12,000gns at Carlisle bull sales per bull and would come back with at least one, sometimes two bulls,” Mr Neill recalls.

“Over the past three years I’ve been able to sell performance recorded bulls of my own, generally around the 2,600gns to 4,000gns mark – I’ve sold four this year.

“I still buy the occasional bull at Carlisle and I am now supplying a few local farms with bulls. Having paperwork, records and performance records, including EBVs, is helping me market them. It gives the buyers and myself confidence in knowing what we can expect from them.”

Feedlot cattle are weighed monthly and batched according to weight and weight gain. Growing home-grown cereal self-sufficiently supports the feedlot system, explains Mr Neill, who says it costs £1.20-£1.30/kg of liveweight gain in the feedlot.

“To be fair to both the arable and beef enterprise I cost cereals at what grain can be sold at off the farm. It takes around 7.7kg of freshweight finishing ration to add 1kg of beef,” he adds.

At around 14 months of age steers require 12kg/day of the finishing ration, with heifers tending to need slightly less, adds Mr Neill.

“I find that 14 months is the optimum time for steers and heifers. After that they need to eat more for maintenance and they generally aren’t as efficient because of this, particularly beyond 18 months.”

In order to make informed decisions about sire performance, all youngstock are weighed at birth, weaning and then at any time they are worked and given medication.

After weaning, heifers graze pasture in an arable rotation, while steers are housed on an 18CP, high digestible fibre store ration to promote controlled frame growth, while being fed silage and straw ad lib, with gains of 0.8-0.9kg/day being satisfactory.

“There’s a heifer with its first calf on the ground this year with a calf doing 0.6-0.7kg/day and she’ll be off as a cull to Carlisle as this isn’t good enough.

“Feedlot performance relates to both genetics but summer growth pre-weaning hinges on the cow,” he explains.

Cows and heifers calve in a 12-week block, mostly around April and May. Heifers start on 10 March and cows on 1 April, meaning DLWGs of 1.4-1.5kg are required for cows to achieve close to a 50% weaning efficiency. What does he require from heifers?

The herd is drafted in from beef-sired Friesian cows at a brother’s farm near Coldstream. Being from a dairy they can arrive at any time of year and calve down between 24 and 30 months of age.

A watchful eye on weight gains gives Upper Nisbet the option of marketing 40 bulls a year earlier through bull fattening with ABP.

This also suits Mr Neill on a cashflow basis, as well as having the added benefit of regular and familiar customers. He adds that finishing progeny on home-grown cereals and retaining some heifers is maximising the Limousin-cross as a dual-purpose breed for finishing and breeding.

“We were selling stores on the previous tenancy and were using Blondes and Charolais genetics but that was a more marginal farm,” says Mr Neill. “We can grow cereal here and we know butchers are looking for a Limousin animal, hence the change in breed – it’s a Limousin market.”

Generally, Limousin genetics are suiting the farm’s marketplace but some British Blue semen is used across some older and home-bred females to present more “stylish” butchers cattle.

Bulls are bred and selected on EBVs for muscularity, growth rates and 200-day milk, with a small pedigree Limousin herd now performance recorded for three years.

Cattle are easily selected for the feedlot or market through a Tru-Test wall-mounted weigh indicator showing DLWG linked up to a pneumatic cattle crush.

This also rules out under and over-dosing of drugs and simplifies record keeping by storing withdrawal periods for drugs on individual animals, keeping a medical history of each animal.

To work, the system requires cattle to be EID tagged, explains Mr Neill. This allows animals to be registered either by a hand held EID reader or a crush-mounted reader. 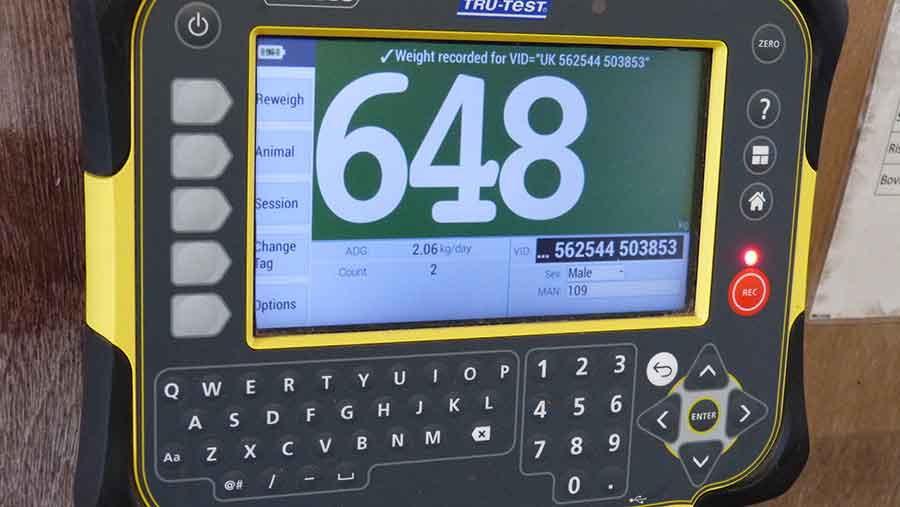 “The first stepping stone is electronic identification as this helps you capture data easily and quickly,” says Mr Neill. “The weigh crate then speeds up the whole process and makes handling cattle more enjoyable.

“Sometimes staff know there’s a high performing animal coming and they want to look at the screen to see how it doing on DLWGs.”

Housed animals are batched in groups of no more than 40 in an 18.2×12.2m pen. Monthly weigh data is sent wirelessly from the scale to a wall-mounted box and then to a smartphone which is then emailed for analysis on Farmplan farm computer software.

An animal can enter the crate, be weighed and leave the crate in 12 seconds, with graphs and performance data ready to pick apart in the farm office on a herd, batch or individual animal level. A batch of 40 cattle are moved, penned, weighed, drafted and rehoused in 10 minutes.

Mr Neill values benchmarking greatly, particularly of his own farm. “A lot of farmers, me included, question the value of comparing operations that are all different. What I value is data that enables you to benchmark yourself against yourself. Doing this month on month, year on year, helps you improve.”