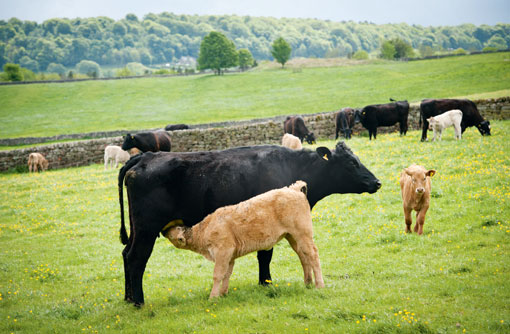 When it comes to selecting the suckler cow most suited to a particular farm or system there are valid arguments to support a range of breeds and crosses to suit the varied environments across the UK.

These attributes complement the choice of terminal sire which are Charolais bulls selected from the top 1-5% Terminal Index – the “curve bender” bulls which have easy calving, high growth rates and deliver calves with frame, growth and muscle.

“When curve bender bulls are used this performance advantage is increased to 26.5%. Cross-breeding results in hybrid vigour which improves low heritability traits such as fertility, health and longevity.”

The relative improvements in performance of the various cross-breeding strategies are outlined in the table below.

Mr Frost isn’t concerned about the dairy influence coming through with the Holstein-Friesian. The last crop of bull calves at Hopping Farm, near Bakewell, Derbyshire recorded DLWG’s of 1.63kg a day from birth to weaning after consuming only 90kg of creep feed – something Mr Frost knows he couldn’t achieve without “milky” cows.

Says Mr Marsh: “The cows at Hopping Farm aren’t big and they aren’t expensive to maintain. Last year they weighed 595kg at weaning and calves recorded a 200-day weight of 336kg which equates to a cow efficiency factor of 56.5%.

“The target is to achieve a 200-day calf weight that is 50% of the cow weight – and this is the first time I’ve seen it achieved in a suckler herd.

“The replacement rate in Mr Frost’s herd is only 17.6% – that compares with the UK average of 21.7%. But low replacement rates aren’t one of the current targets when culls are at such a high value and bulling heifers can be bought for the same money earned by a good, fit cull cow grading O+4L.”

Dairy-bred suckler dams are often criticized for their poor conformation and while Mr Frost agrees the cows, when sold fat, only grade O+ the figures show that 29% of his bull calves produced E grade carcasses with 68% grading U.

“That’s the sort of information that mystifies the critics,” says Mr Marsh.

The use of poor-quality beef bulls on dairy farms continues to be a problem where heifer calves are destined for a role as beef herd dams.

Recent figures from BCMS show 40% of the national suckler herd contains dairy breeding – proof that the dairy-cross suckler female still plays a major role in UK suckled calf production. But the current trend in the dairy industry is to move away from extreme Holstein breeding in favour of more easily managed cows that live longer and can hold body condition.

Mr Frost’s herd replacements are sourced from a local dairy herd that doesn’t have “extreme” Holstein types and has a high health status. The Limousin bull used on these cows is a decent bull which has been selected by the dairy farmer to breed good quality suckler replacements.

Says Simon Marsh: “A bull used to breed suckler replacements must have a positive Caving Ease Maternal EBV to produce easy-calving daughters. Choosing a bull with high 200-Day Milk EBV is less critical in this situation as milk comes from the Holstein-Friesian.

“In a bulling heifer Mr Frost wants good width between the pin bones, conformation that is not too extreme, not narrow in any way, not excessively leggy, but with good locomotion. He selects 22 heifers from a bunch of 35 and buys from one farm to minimise the disease challenge. All replacements are bought as bulling heifers at 18-20 months old which is considered a more appropriate and also much cheaper option compared with buying newly calved heifers.”

The heifers are summered cheaply on rough ground which can’t be grazed by cows with calves at foot and wintering is relatively low cost on restricted silage and straw.

Breeding your own replacements

Breeding your own replacements may sound simple, but it can be quite complex, says Mr Marsh.

“The big advantages are improving in-herd biosecurity and moving away from the Holstein’s perceived influence of poor fertility, longevity and poor conformation.

“But suckler producers who have started breeding their own replacements can come up against a range of issues such as cows lacking milk yield, an increase in cow size and problems with temperament because suckler heifer calves have less human contact compared with bucket-reared dairy-bred calves.

“There’s also a requirement to calve at two years old with a spring block calving herd and extra vigilance to ensure a bull doesn’t serve his own daughters.”

To ensure a herd which has a cull rate of 20% sources all its own replacements, some 54% of the cows need to be put to the maternal breed sire. It can have an impact on the sale of weaned/finished calves because the male calves have a lower sale value compared with male calves sired by a terminal sire. This needs to be compensated for by improved values for the heifer for breeding.

Popular maternal breeds are Simmental, Stabiliser, South Devon and Saler, but the bull chosen must have a top 20% EBV for Calving Ease Daughters, Milk 200 Day weights, Scrotal Circumference (an indication of fertility) and Mature Cow Weight – with low values being preferred for the latter.

Other suckler herd replacement strategies from across the UK

SAC beef specialist Jimmy Hyslop says the suckler herd at The Bush Estate, Edinburgh, is based on a two-breed rotation involving Angus and Limousin.

The cows’ genetics are therefore either two-thirds Limousin and one-third Angus or vice versa. They combine native and continental genetics each with their well-known breed-specific traits. Cow weights are now approaching 700kg and the bulls used must have high 200-Day Milk EBVs with a continental breed.

Steven Johnstone and Norman Weatherup at Greenmount College in Northern Ireland run a three-breed rotation in their 100-cow herd using a mix of Angus, Shorthorn and Limousin genetics to “synthetically” reproduce a “West of Ireland” type cow. Their aim is a moderately-sized (550kg), easily fleshed cow with hybrid vigour.

The Beef Improvement Group, headed by Richard Fuller, introduced the Stabiliser into the UK. This is a four-breed composite consisting of Red Angus, Hereford, Simmental and Gelbvieh genetics developed in the USA. The Stabiliser was selected for maternal traits of milking ability, calving ease, calving interval and early puberty and with the genotype selection for a medium-sized cow, it requires low maintenance, but is capable of high output, longevity and hybrid vigour.

Francis Lively from Hillsborough is in the process of establishing two herds based on the Stabiliser or Limousin x Holstein-Friesian cow.

Says Mr Marsh: “There are numerous strategies for producing suckler herd replacements. Mr Frost adopts a relatively simple system based on a small-medium-sized milky cow with hybrid vigour. But it does depend on a link with the supplier to ensure the right type of bull is used to produce the suckler cow that’s needed.”