The judges saw all aspects of the beef farming system when visiting the finalists this year, from calf rearing to suckler herds and finishing businesses.

Three impressive beef enterprises made the shortlist and displayed outstanding stock and technical production, alongside innovation, stockmanship and vision for their own systems and the wider industry.

All three finalists are working tirelessly to improve their systems, making the most of the assets their farm provides.

The 2017 Beef Farmer of the Year finalists are: 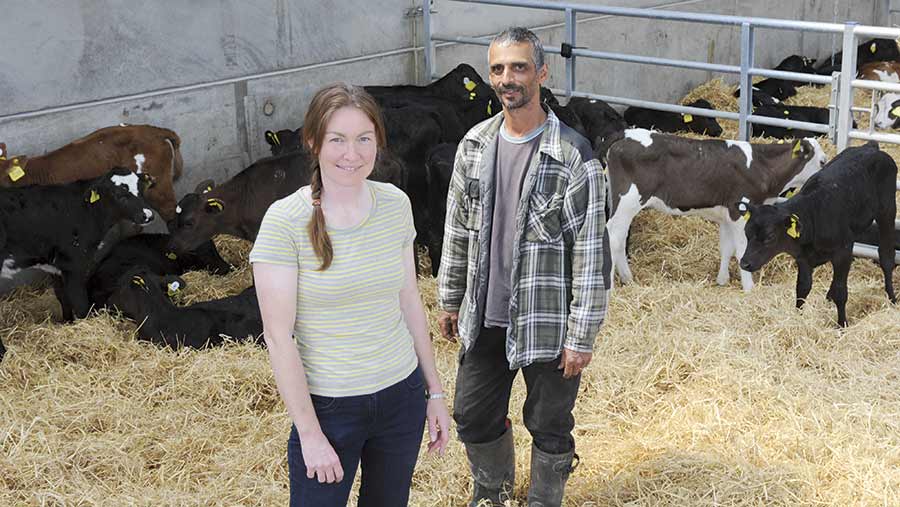 Steve and Jo Pile’s high-tech calf-rearing unit has been designed and built to maximise efficiency and productivity alongside animal welfare.

The power-hungry automatic milk machines are fuelled by rooftop solar panels, which produce enough energy for the whole unit and spare to be sold to the National Grid.

Setting up the state-of-the-art system, run in conjunction with Blade Farming, has been a massive investment and the two buildings are now wi-fi enabled so Jo can access the milk machine data anywhere in the world.

Calves between 9 and 40 days old arrive at the unit from collection centres and are reared by Jo and Steve for 12 weeks before they move to a finishing unit.

Animals are EID tagged so the milk machines can recognise them, give them their milk and record key statistics. The enables Jo and Steve to rigorously check drinking times, speeds and daily weights to gauge calf health and performance.

Calves are initially placed on plan A, which allows them 5.7 litres of 40C milk a day, at 123g of milk powder to 1 litre of water, as well as ad-lib calf nuts.  If they are underperforming or struggling in any way, they will move to plan B, which entitles them to 7.2 litres/day.

More than 500 calves have now been reared by the Piles and have been hitting daily liveweight gains of 0.8kg before weaning and 1.2kg after weaning.

To achieve this is no mean feat and requires good stockmanship.

Hygiene is critical and strict health protocols, detailed on posters around the unit, are followed.

Vaccinations are key and Steve and Jo work closely with Blade’s lead vet, Tim Potter, on the health management of the unit.

Each animal will receive an intranasal vaccine for pneumonia upon arrival at the unit and during its time there, it will also get a Risposal 4 vaccine, ringworm vaccine, BVD tag, castration and disbudding if necessary, as well as pre-movement TB testing.

Steve and Jo are clearly innovators and constantly looking for the next way to improve their business. They recently made the decision to sell their suckler herd and focus on the calves and finishing stores in order to free up shed space for a diversification.

The income from selling the suckler herd will fund the conversion of two cattle buildings into office and workshop space, so they can secure an income unrelated to agriculture.

They want to be well prepared to manage the uncertainty of Brexit, price volatility and the challenges of changing consumer demands.

Steve and Jo are combining a progressive approach to data with excellent stockmanship to optimise productivity and welfare. They are adapting and diversifying to future-proof their business and their willingness to share best practise and knowledge with others is admirable. 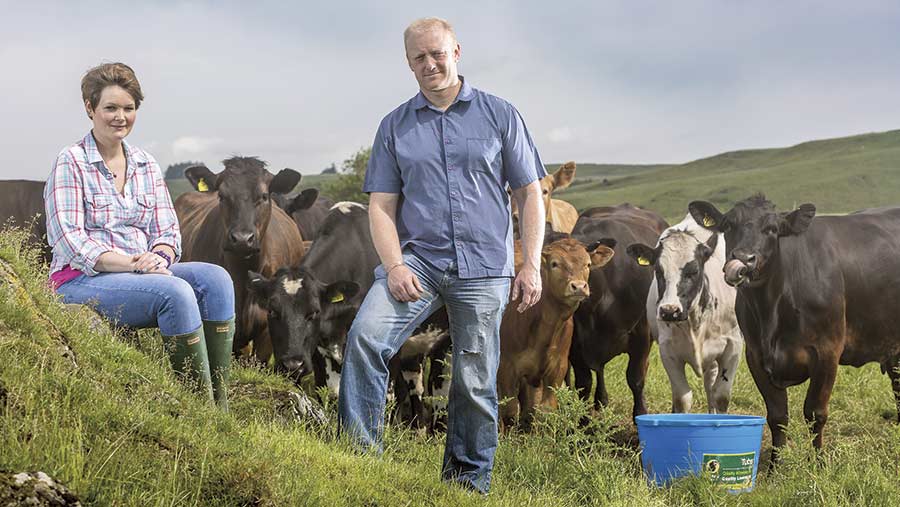 In order to facilitate the expansion, a big focus has been placed on investing in infrastructure, technology and data.

Investing in new slatted cattle housing with automatic scrapers has taken the feeding and bedding time down from two-and-a-half hours for 28 cows to 30 minutes for 40 cows.

Paul and Dwynwen are strong advocates of benchmarking and Farm Business Survey results from the past two years show they are well placed in the top third of financial performance for suckler cow production.

They have successfully used heat detection collars to pull the year-round calving herd back to a block calving window of January to March. They have also tightened the calving index from 420 to 370.

Using the collars, Paul got AI conception rates to 74% of cows in calf after first service and 96% in calf after a second service. A Limousin stock bull is used as a sweeper.

He rarely needs to assist with calving, but has been using the “Moocall’ calving monitor for the past three years, so he can be on hand if necessary.

The ideal cow for their system is being bred from some of the bucket-reared calves, with British Blue cross Friesian heifer calves bred at 15 months to a maternal Limousin sire.

This produces the type of replacement cow Paul is looking for, and gives him “the best of three worlds”, with more than enough milk, as well as the confirmation from the British Blue.

As part of their herd expansion, they have been using sexed semen from Limousin bulls with high maternal EBVs.

The vast majority of stores are sold aged 16-20 months through Llanrwst Auction Mart, although Paul is looking to sell them earlier to free up shed space for finishing bucket-reared calves.

If it weren’t for council tax, the Williamses would be nearly bill free as they have their own water supply from a spring on the farm and a 15kW wind turbine powers the farm, with spare power to be exported.

Ground-source technology heats the farmhouse and will heat the holiday lets they are planning to convert one of the older farm buildings into.

Paul and Dwynwen already run a marquee hire business alongside the farm and hope the future holds a profitable multitier expansion for their business, including agriculture and tourism.

Paul and Dwynwen are taking their beef enterprise to the next level, focusing on breeding and benchmarking with a keen eye for figures. Technology has been employed to maximise efficiency, allowing the Williamses to start new ventures alongside their profitable suckler herd. 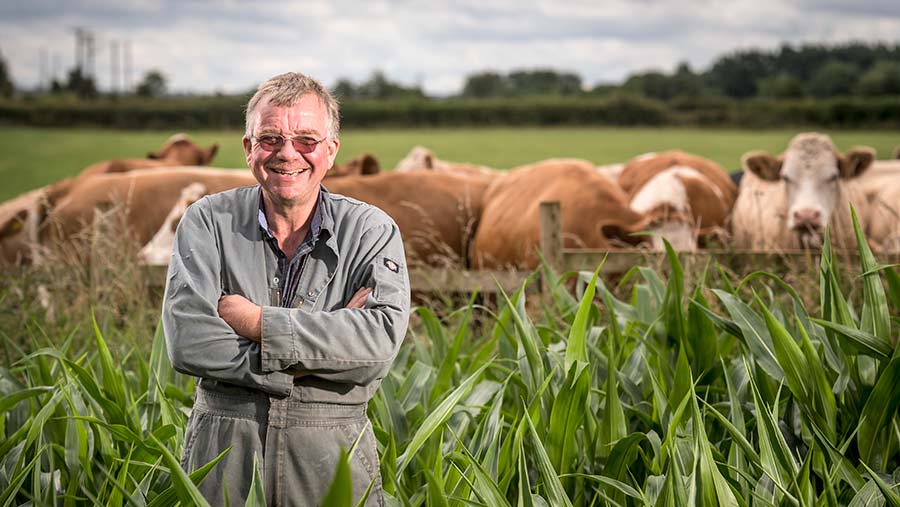 Ian Willison is hitting impressive daily liveweight gains of 1.8-1.9kg with the progeny of his suckler herd.

The autumn-calving herd at Williamwood Farm comprises mainly Simmental-crosses, put back to a Simmental or British Blue bull.

Female progeny are kept as replacements or sold privately as embryo recipients. Males are kept entire and finished to a required specification, with the vast majority grading U+ or U-.

Bulls are fattened indoors on a 13-14% protein blend and maize and grass silage, with the aim to have them out of the sheds before October.

Ian grows 8ha of maize each year for the ration, having switched from winter barley six years ago when blackgrass became an issue – an example of his enthusiastic approach to tackling challenges and maximising resources available.

Through learning DIY AI, Ian has improved conception rates to ensure 60-65% of cows are in-calf after the first service and 75% after the second. And with the heifers, 70% should be in-calf after a three-week run of AI.

He has found achieving accreditation for BVD, IBR and Johne’s, as well as the use of trace element boluses, has improved conception rates significantly.

Ian works closely with his vet to maintain high health status and carries out regular blood testing to stay on top of herd health, which he believes is crucial as he doesn’t vaccinate his closed herd.

Ian has been performance recording “since day one” – he is a Monitor Farmer for the British Simmental Cattle Society and a Beef Focus Farmer for Harper Adams University.

“We believe in knowing exactly where we stand so we can identify the flaws and limiting factors, because only when you know your baselines can you start to improve,” says Ian.

“Length doesn’t bring calving problems – the backend does,” says Ian. “The market doesn’t demand a big rump, it demands length and either side of the spine.”

Williamwood Farm is already home to two successful diversification businesses, but a third is on the cards. Ian’s partner, Lorraine, runs a 32-horse livery enterprise as well as a 40-caravan storage facility. A cattery is in planning.

A less land-based option will allow Ian to continue to increase the herd by 10-15 more cows.

He knows that grassland management will be a big part of this and is currently scoping investment in fencing and water troughs to split fields up so cattle can graze on a tighter rotation.

The results of Ian’s attention to detail when it comes to technical efficiency and breeding are evident in phenomenal daily liveweight gains and all-round performance records. He is passionate about making the most of his farm’s assets and is doing just that.

“The production of quality British beef in an innovative and sustainable manner is a key driver for our business. I would like to recognise the achievements of all three finalists who have demonstrated a passion for innovation, an attention to detail and an unwavering commitment to delivering a quality and sustainable product.”