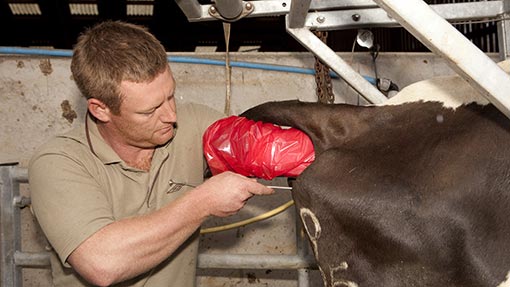 It’s been seven years since the last major update to the dairy bull proofs and since then, milk prices have increased, and so too have feed and cull cow prices.

Therefore, the time is right to update the model to help farmers select the best genetics with today’s prices and costs, says DairyCo’s Marco Winters. “Milk prices were 17p/litre and are now nearer 30p, and the costs of milk production have also gone up.”

A key change to the Profitable Lifetime Index (PLI) is a reduced emphasis on milk yield, with more on cow health and fitness.

“There is a trend towards more constituent-based milk contracts and, to reflect this, there is more weighting on bulls with higher milk fat and protein.”

But he reassures farmers using PLI that milk production will continue to increase – just at a slower rate.

Many familiar bulls will remain as the newer ones tend to be strong in fitness and longevity, but the most noticeable difference is the best-scoring PLI has doubled from the top figure of £302 last time.

“Farmers will need to reassess what is a good bull. A bull at £200 will no longer be a good bull and they should be looking at more than £400 for an elite bull. This increase is due to the today’s higher milk price, as well the greater cost benefits of improved somatic cell counts, fertility and cow longevity.

“It has been felt for some time that PLI was underestimating the value of improvement in herds. A Promar study showed the actual financial benefit was several times larger than the £PLI and the index figure was not reflecting all the benefits,” he says.

The advice remains the same. Farmers should use £PLI to initially screen bulls and then focus on the traits of interest, such as improving fertility or SCC.

“This gives you a better balanced bull. If you focus solely on one trait, you could end up picking a bull which is weak for another key trait.”

There is also a new maintenance cost included to reflect differences in the efficiency of milk production and cow size.

Cow size has increased over the years as farmers sought higher yields. “But farmers have been saying they don’t want bigger cows, so we have included for the first time a maintenance cost,” explains Mr Winters.

There will be a penalty for bulls that throw big cows. Conversely, those that produce smaller cows giving the same amount of milk will gain a bonus, he says.

“Model predictions are that the changes will result in increases in bodyweight levelling off rather than smaller cows.

“Some will argue that this will reduce cull cow and calf values, but there is a saving in heifer rearing costs with a lower mature bodyweight. Modelling shows that both cancel each other out, and overall, it is cost neutral.”

Bulls producing bigger offspring will drop down the list along with those without good daughter fertility.

Up to now, they had to rely on the New Zealand breeding worth or Irish economic breeding index (EBI) systems, which are based on prices and costs in the respective countries.

SCI uses the same principles as PLI and is evaluated using the same model, the differences being the underlying system costs, explains Mr Winters.

“For example, liveweight is more important for these systems, as farmers are looking for a smaller, more efficient animal.”

There is also more emphasis on fertility as it is crucial that cows have a 365-day calving interval, he says. Similarly, as with PLI, there is less emphasis on milk yield. Instead high fat and protein bulls get a higher weighting for £SCI.

Unlike PLI, it is an across breed index, as these farmers tend to use a range of genetics, crossing Holsteins with perhaps Jerseys or Friesians.

But Mr Winters warns the index should only be used by farmers operating the New Zealand system. “All other farmers should stick with PLI.

“Those with year-round calving or autumn block calving herds should continue to use PLI, as the cost-benefit of milk production is different due to higher feed costs.

“Even herds which calve in spring, but produce more than 5,500 litres should not use the SCI. This means that only if you are inseminating in May and targeting around 4,500 litres you should use SCI.”

Finally, he stresses that SCI and PLI cannot be compared as they are on a different genetic and cost basis. “Farmers will either use PLI or SCI – they cannot use both.”