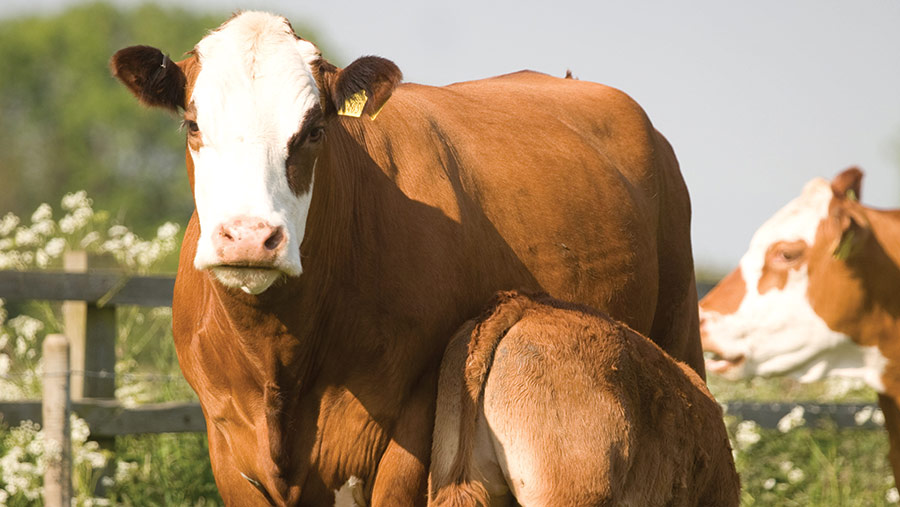 Weaning calves can be a stressful event for both the cow and calf, but it is necessary to give the cow time to recuperate in time for the next breeding event.  There are steps that can be taken to minimise stress and reduce growth checks.

When should calves be weaned?

Feed supply and cow condition should determine when to wean. Calves should be at least five months old.

By 200 days old, calves should be getting 75% of their nutritional needs from sources other than milk. Therefore, feeding the calf directly will be much more efficient than feeding the cow to produce milk at this stage.

If the cow is in poor condition, calves should be weaned immediately to allow the cow time to recover before beginning her next lactation.

Conversely, if cows are fat, delaying weaning can help to reduce some condition before the next calving.

Spring calving cows should be managed to gain condition over the grazing season, which can then be mobilised over winter. Spring-born calves should be weaned two to three weeks prior to housing.

Autumn-calving cows should be weaned at least one month prior to calving for the udder to recover and quality colostrum production to be achieved.

How can you minimise stress at weaning to minimise growth checks?

It is advised not to dehorn or castrate cattle within a month either side of weaning.

Ensure housing is well ventilated and stocking density not excessive. It is also helpful to clip a 30cm-wide strip along a calf’s back to help reduce sweating.

Calves should be vaccinated against possible respiratory diseases and clostridial disease prior to housing to ensure they have the best chance of not succumbing to growth-limiting disease or even death.

Calves from different groups will potentially have been exposed to different bugs and have different levels of immunity, therefore it is best to avoid mixing groups and ages.

Should you creep feed calves?

Creep feeding has many benefits that can make it cost effective in a lot of herds.

The use of creep feed can lead to:

If you are breeding replacement heifers to calve down at two years old, creep feeding can help to achieve the required growth rates.

When should you start to offer creep?

Timing will be dependent on forage availability as well as cow condition and the calf’s breed, along with its growth potential.

Six to 10 weeks prior to weaning is a good time to start putting out creep feed. If bulls are going to be intensively reared, you may wish to start sooner – for example, 12 weeks before weaning.

Alternatively, if cows are in good condition or particularly milky and conditions for creep feeding are difficult, you will still see a benefit starting four to six weeks before weaning as this still allows the gut to adapt to hard feed.

A notable exception to this may be native-breed females, which can be prone to laying down fat and will be finished later.

Advice on transitioning from creep to a grower ration

After weaning, initially continue to creep feed along with the grower/finisher ration to smooth the transition. Make sure a good forage source is also available to reduce likelihood of acidosis.

If you are selling calves at weaning, it is useful to tell buyers what they have been fed so they can provide a similar concentrate.

What weaning method should be used?

However, an AHDB study showed fence-line weaned calves spent 65% of their time pacing and vocalising very close to the fence, indicating that being physically separated while still being able to see and hear the dam is a major source of stress.

Although this study did not find nose flaps to be beneficial (used for 17 days) either, I have plenty anecdotal evidence of farmers using nose flaps for a shorter period and seeing a real benefit.

Key performance indicators (KPIs) to consider at calving and weaning

1. Number of calves weaned per 100 cows and heifers put to the bull

Your target should be 94, although 90-92 may be a more realistic initial target.

Clearly, this target will be hugely influenced by the number of calves born.

You should look closely at these two KPIs in conjunction with each other.

A satisfactory number of calves born but not weaned suggests issues with the rearing process.

Keep records of the age of mortality to help guide you and your vet towards the most likely causes and areas to focus on for improvement.

A good target would be 65% in the first cycle and a further 30% in the second cycle.

A tight calving pattern demonstrates good fertility and will help with management tasks around weaning, as calves will be of a more similar age and size.

3. Cow efficiency (weaned calf weight, adjusted to 200-day weight, as a percentage of the dam)

The higher the percentage, the more profitable the dam is. Suggested target is 50%.

This KPI focuses on weaning weights relative to mature cow size and can be useful to help with culling decisions, as well as policy for selecting replacements.