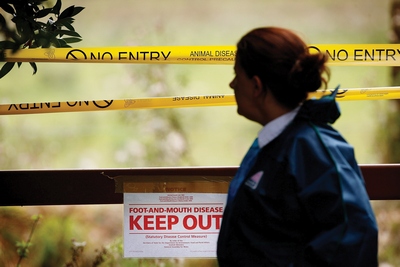 Council leaders have been told to cut their animal health budgets – used to fight foot and mouth and bluetongue diseases – because government mistakenly promised them funding that doesn’t exist.

Local animal health teams had been promised £9.77m by the government’s Divisional Veterinary Managers for the control of animal disease in the current financial year.

But there was only ever £8.5m available in the DEFRA budget for this work, says local government watchdog, LACORS.

As a result, ministers have said that councils will have to cut up to 12% from their animal health budgets during the last five months of the financial year, leading to job losses and reduced inspection work.

Junior DEFRA minister Jeff Rooker has also indicated that the largest councils will face the biggest cuts, in order to protect the budgets of the smallest councils. This will hit large rural councils disproportionately.

LACORS has reacted angrily to the demand and Geoffrey Theobald, LACORS chairman, has written to Lord Rooker demanding that DEFRA covers the £1.3m shortfall for the rest of this year.

“It is simply unacceptable that, at a time when resources are being stretched to breaking point by foot and mouth disease and bluetongue, government should force local councils to pick up the pieces caused by its own mismanagement,” he said.

“This decision will result in animal health officers across the country losing their jobs at a time when government is expecting strict enforcement of disease control measures.”

Conservative MEP Neil Parish also criticised what he sees as another example of “DEFRA’s incompetence”.

“I will be raising this matter with the European agriculture commissioner as a matter of urgency,” he said.

“Consumers will hardly be reassured if they hear the government is scaling back on animal health funding at a time when it should be providing all the resources the countryside needs.”