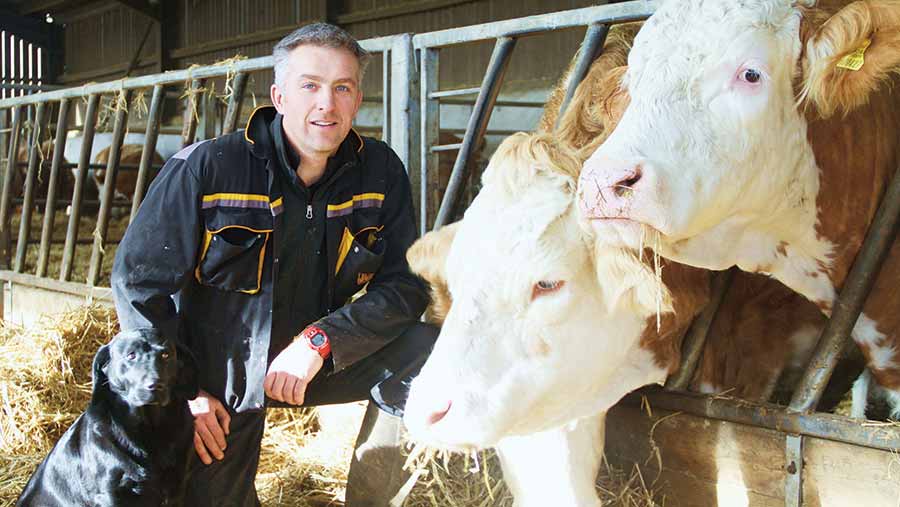 It took James Shouler less than a year to be convinced that producing most of his own feed was the way to go to ensure the long-term sustainability of his Oxfordshire farm.

Having embraced rotational grazing last year and outwintered spring calving suckler cows and heifer calves on a hybrid brassica for the first time, he quickly witnessed a drop in winter feed costs (see “Forage savings”) and creep use.

As a result he has chosen to adopt a strategy that maximises his land’s forage-growing potential throughout the year.

He believes such an approach is vital considering the potential removal or reduction of subsidies after Brexit.

“We have to be in a situation where any enterprise we have must be making a profit in its own right. To me, a lower-cost situation that still has a high value to it has to be a decent way going forward,” he says.

Mr Shouler runs the Alchester herd of high-genetic-merit pedigree Simmentals at Elm Tree Farm, Bicester. The herd has 35 cows calving in spring and 15 in autumn.

All females are kept as replacements or sold as breeding animals. About five males will be sold as stock bulls and the rest as stores.

Mr Shouler adopted a rotational grazing strategy after a friend suggested it could result in an extra 15% grass growth.

Starting late in the season, electric fencing and troughs were set up in late May last year at a cost of about £800. Mr Shouler then sought advice from AHDB Beef & Lamb as part of his involvement in their Progressive Beef Group. Fields were split and a grass plate meter used.

Compared with the original set-stocked system, Mr Shouler says grass quality and growth improved, there was less rejection and less creep required. “We probably saved £400 in creep,” he says.

This year, the grazing strategy will start earlier, with the aim of achieving residuals of 1,500kg DM/ha.

However, the most marked cost savings have come from outwintering cows and heifer calves on 8ha of a rape/kale hybrid with a grass run-back and straw pad.

Traditionally, spring-calving cows were weaned in September, with calves immediately housed. Cows were then housed from December until April.

However, last year all weaned heifer calves were put on the brassica. This resulted in a cost saving of £12.48/day. The hybrid brassica crop was split in two, with cows later grazing the other side. This meant they were only housed on 6 January in good condition, allowing them to go on to a cheaper ration.

Mr Shouler adds: “It’s been a much easier winter having them out and much less labour intensive.”

The plan now is to build on this forage framework so only liquid feed is bought in. Forage rape will be followed by wholecrop triticale and peas and then put back to a winter brassica.

Forage rye will also be grazed by autumn calvers for the first time this spring. This may be followed by a cover crop, which will provide forage in August when the farm dries out, while also helping to boost soil fertility on some of the farm’s arable land.

Reseeding with a perennial ryegrass, red clover and large leafed white clover mix may also be undertaken on some grassland – subject to Natural England approval – to produce quality silage.