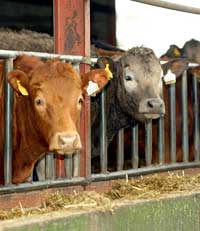 Just because the influence of feed quality on dairy cow milk yields is visually and instantly evident, it doesn’t mean the same production effect isn’t occurring in beef cattle.

And while it’s nothing knew that a balanced diet is going to increase liveweight gain and provide the correct amount of fat cover, it is still surprising to hear that most beef farmers feeding silage don’t get it analysed.

That’s according to North West Farmers southern beef specialist Andrew Mason, who says analysing silage ensures you get the best possible feed for your system and, as a result, the best possible results. “This means farmers are buying what they need, instead of essentially wasting feed, which can save a lot in terms of feed costs,” he says.

And, if farmers wish to achieve desirable conformation and fat class at slaughter and reduce finishing time, then knowing what you are feeding is critical, he adds. “Time is money. You may be able to achieve £1200 for a 30-month-old animal, but calculate that over its lifetime and it works out at barely more than £1 a day. Fine-tuning the diet can help get animals off the farm quicker.”

Given the hike in straw prices this year, having cattle on the farm for only one winter is something Cornish beef farmer Steve Henwood is only too keen to be doing. He analyses his silage several times a year and says it allows him to feed a specific blend for his farm in a TMR to get the best possible results.

“We want to make the most of the grass, so knowing what you are feeding is critical,” he says.

A combination of actions has seen Mr Henwood not only cut his feed bill, but also reduce finishing time to slaughter. “We have fined-tuned the diet and, although silage analysis has been part of this because we know what we are feeding, we have also reseeded a lot of old grasses, which has helped boost feed quality from the grass.”

By knowing these figures Mr Henwood has been able to cut the quantity he feeds to his 55 British Blue x Limousin cattle significantly. “Before reseeding we were feeding 9kg a day to finish cattle on but, because we have seen the difference in silage quality as shown by the analysis, we have been able to cut it down to 5-6kg a day and are also finishing earlier.”

Earlier finishing is mainly down to cows milking better off the grass which, as a result, has boosted calf growth rates. “Before we would be finishing cattle at about 28 months; now it is anywhere between 14 and 18 months. This means cattle are generally only on the farm for one winter, which also means we have been able to increase the stocking rate by 10-15%.” And the speed of growth is mainly down to feeding, adds Mr Henwood. “Recently we sold a 400kg animal deadweight at 17 months old and it graded E3H. Although the conformation has not changed since getting silage analysed and reseeding the leys, the time to slaughter has.”

“The beef industry has got to be more in line with the dairy industry. Gone are the days when cattle could be turned out and forgotten about; we have to be more viable if we are to survive. As a tenant farmer, there isn’t enough money in it to be complacent, particularly given current beef prices,” he says.