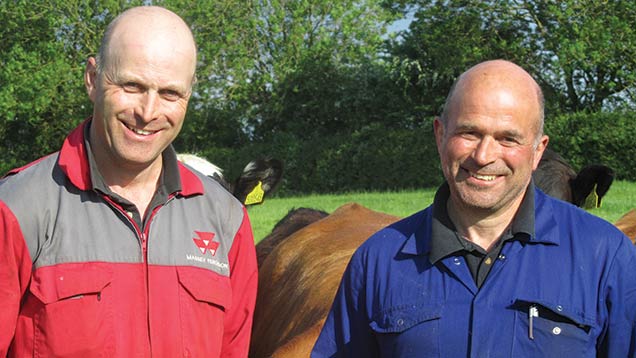 For Stamford beef farmers John and Guy Turner, there is no better way of finishing cattle than off grazed grass and red clover.

Their knowledge of good grassland management came from running an organic dairy herd, which was dispersed following the loss of price premium in 2004.

Keen to maintain grass/clover leys in the rotation at The Grange, to improve soil structure and fertility the Turners set up a suckler beef herd, initially serving 15 dairy replacements that had not been sold, to a Limousin bull.

Fed purely on grazed grass and red clover silage in winter, their offspring finished easily, with no cereal feed, at 26 months.

There are now 35 spring-calving cows – a mixture of mainly Limousin and Red Poll dams. Native types have been introduced, including Angus, Hereford and Lincoln Red, but none have performed as well on the grass-only diet as the Limousin crosses.

Selecting sires for carcass traits has reduced finishing times from 26 to 22 months with consistent finishing at between 380kg and 400kg deadweight, and an average conformation grade of –U3. A batch of five finished beasts is sold to ABP Food Group every other month all year round.

“We retailed two animals a year ourselves in a box scheme for six years,” explains John.

“It was very well supported but took a huge amount of time in processing and delivery, which didn’t fit well with the other elements of the business.”

The grass leys are drilled by the third week of August, with a hybrid and perennial ryegrass mixture containing a 5% white clover and 15% red clover blend, plus added chicory.

Deep-rooting lucerne is also being trialled, and other diverse swards are planned.

“Finishing beef animals to commercial timescales and specifications just on grass leys and silage is possible – but it has to be of the highest quality,” says John. “Typical first cuts here have 11.5 ME and 13.7% crude protein (CP), and third cuts 11 ME and 16.4% CP.

“While ideal for finishing stock, this is usually too good for the cows and youngstock and we have to blend the cuts and include hay and straw to ‘water’ it down.”

After the cereal crop has been combined, the field is cultivated with two passes from a winged harrow, which lifts the soil but prevents loss of moisture and organic matter and minimises disruption to soil life.

The seed mix is drilled using a homemade grass box on wheels with a flat roll behind.

The new ley is left to establish over winter and a light first cut taken in May. In the first year the grasses predominate, but by the fourth year, red clover has taken over. Yields of 16t DM/ha are usual over three cuts.

Timing silage making is critical. The Turners prefer not to rely on contractors and carry out all mowing, raking, tedding and baling themselves.

“Our fixed costs are much higher than other beef producers,” admits Guy, “But our beef enterprise is completely reliant on high-quality forage, and we want to cut it when we know it is ready.”

The grass is mown leaving a high stubble, left to wilt for 12 hours, turned and left for a further 12 hours.

It is then made into high-density, one-tonne bales and wrapped with six layers of high-quality film in the field, within one hour of baling.

The bales are removed from the field that day and stacked on their ends, three high using a bale squeezer.

“A lot of people said we couldn’t base a beef system solely on clover leys – but we have found them ideally suited to this farm,” says John, a founder of the Pasture-Fed Livestock Association.

“This is sustainable farming that is good for the land, but also provides us a commercial return for a high-quality beef product.

The pasture-fed approach could easily be dismissed as purely artisan and low output, but we believe it is a real option for mainstream beef producers as well.”