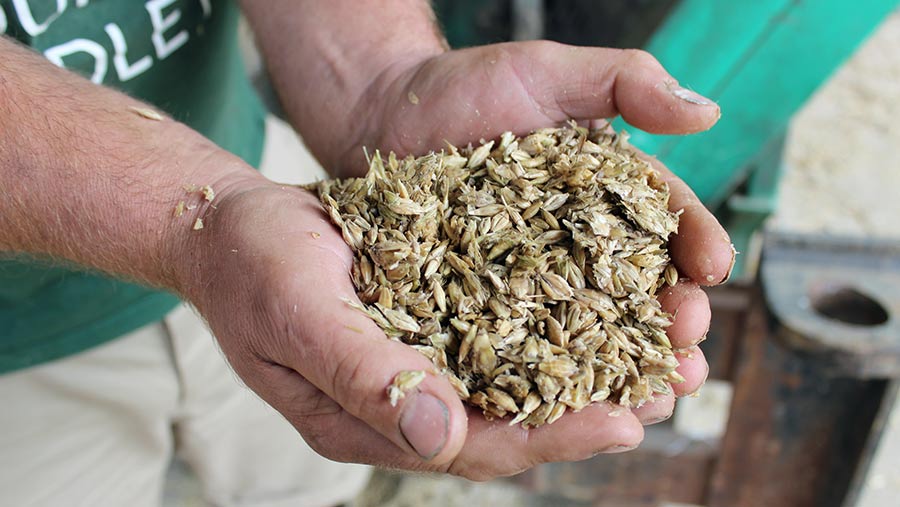 Mr Fairbairn had been growing and drying grain at New Meadow Farm in Winchcombe for his beef rearing and finishing business for many years, but was beginning to question whether the costs and hassle involved were worthwhile.

Finding the right window for cereal harvest at the ideal 14-15% moisture was an age-old challenge and using a specialist mobile roller to process the grain added extra cost.

Once the corn was in from the field, there was also the issue of dry grain storage, which – for his then small beef enterprise – was a relatively costly business, adding about £15/t.

Buying his own grain roller was the first step in reducing his processing costs.

“Having my own grain roller was the first step in cutting costs and I managed to obtain a second-hand Murska 350,” says Mr Fairbairn.

But Ian Hall, from feed and forage preservation specialist Kelvin Cave, questioned the wisdom of rolling dried grain at all, recommending instead the concept of crimping – a process by which grain is harvested early at 25-45% moisture and treated for long-term stable storage.

“The machine Duncan bought was perfectly suited to rolling dry grain, but it is also designed for crimping,” says Mr Hall. 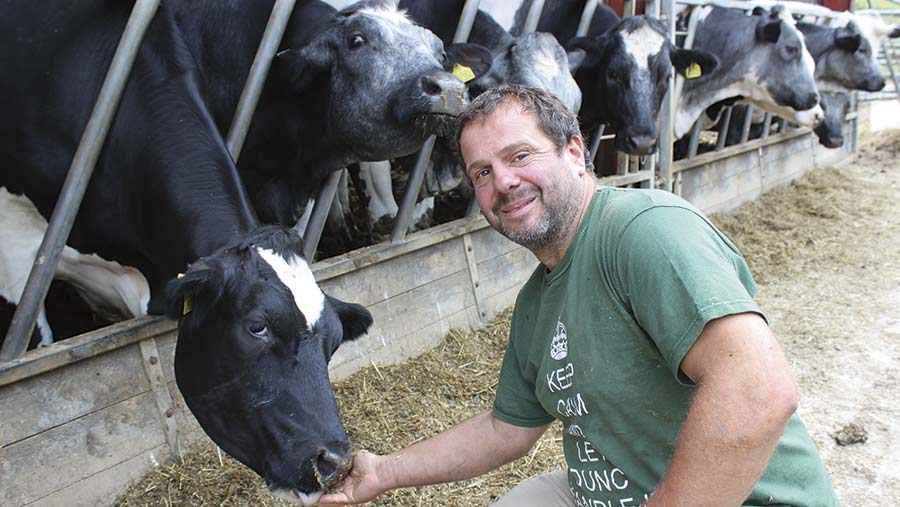 The benefits of crimping

This means high moisture grain can be harvested around three weeks earlier than conventional harvest and is processed with a crimping preservative through an applicator on the machine.

The crimped cereal is then stored in a similar way to silage – compacted and sheeted in a clamp without a requirement for specialist equipment.

This process not only brings the cereal in at a higher feed value, it comes in at a higher dry matter yield and in better condition, usually before there’s any disease, shrivelling or loss of grain, says Mr Hall.

“And with the right preservative, a quick and controlled fermentation is achieved and the crop’s nutritional value is retained,” he adds.

Switching to crimping and the results

Mr Fairbairn could see the appeal of the process and, despite having initial reservations, he decided to try it on a small scale.

“We had a long, narrow silage pit with concrete panels that I’d used for storing moist feeds, so we used this for the crimp,” he explains. “I did have reservations because it was completely new to me and I was worried about what would happen if it didn’t work out.”

In the first year he cut two fields of winter barley and the crop came in at 12.4t/ha at 42% moisture.

“Even allowing for the extra moisture, we had good dry matter yields for these fields,” he says. “However, we think we cut the corn a few days earlier than ideal, and now aim to harvest at 28-32% moisture.”

The clamp was opened for the first time three weeks after harvest and Mr Fairbairn says he was impressed with the results. “It smelt like honey, the cattle loved it and there was absolutely no wastage.”

Continuing to use crimped cereals has now allowed him to rethink how he feeds his cattle and he has changed his whole system.

Previously, he bought calves at around five weeks and would feed them milk and creep, followed by a pellet until they were around five months old. However, the system was costly.

Instead, animals are now bought at three to four months and go straight on to the grower total mixed ration (see panel). They stay on this until they weigh 450-500kg and then move on to the finisher ration.

In the finishing period, the ration is based on two-thirds of the grower ration and one-third crimped barley (fresh weights), which ramps up the starch to 35% (see box).

Mr Fairbairn says he isn’t concerned about acidosis as, unlike dry rolled cereals, they are slowly fermenting and very safe for the rumen. He adds that since moving onto the ration he hasn’t had any cases of scours.

David Hendy, the farm’s nutritionist, says that not only are there practical and logistical benefits to crimping cereals, but it has nutritional advantages.

“It’s safer for rumen stability, is more digestible and degradable than conventional rolled grain, and can be safely fed at a higher rate where finisher rations need to have optimum performance,” he adds.

The cost of the crimped barley has been meticulously worked out and Mr Fairbairn says it’s considerably cheaper than rolled, dry-stored cereal, at £116.66/t DM (see table).

He compares this with the £148/t DM he has calculated as the cost of his dried, rolled barley. Although he says this varies from year to year, depending partly on whether drying is needed.

However, this figure fails to account for the additional yield to come from the earlier crimp harvest which, on average, has been over one tonne/acre extra on a dry matter basis because of the lack of losses.

This cost of crimped barley has been worked through to cost the entire TMR, which Mr Fairbairn says is £88.45/t of dry matter for the growers and £106.50/t DM for the finishers.

However, he says the most important thing is not just the cost of the feed or getting the highest growth rate, but the cost of producing a kilogram of liveweight gain.

With growth rates averaging 1.1kg/day for growers and 1.45kg/day for finishers, he says this costs the business 66.7p/kg and 90.3p/kg of liveweight gain, respectively.

Confident these figures are appreciably better than his earlier ration, he says he has cut the cost of the bought-in feed by at least £5,000 a year and now aims for 96-98% self-sufficiency.

However, he says the knock-on benefits of harvesting and using crimp extend beyond the cost of liveweight gain.

“The contractor loves the job because harvest is so early, it’s no longer weather-dependent and it doesn’t matter if – like this year – there is uneven ripening of grain,” he says.

“We also get more and better quality straw, which has a higher feed value, and we can get on the fields early for autumn cultivations and potentially get in a forage crop for autumn grazing,” he says. 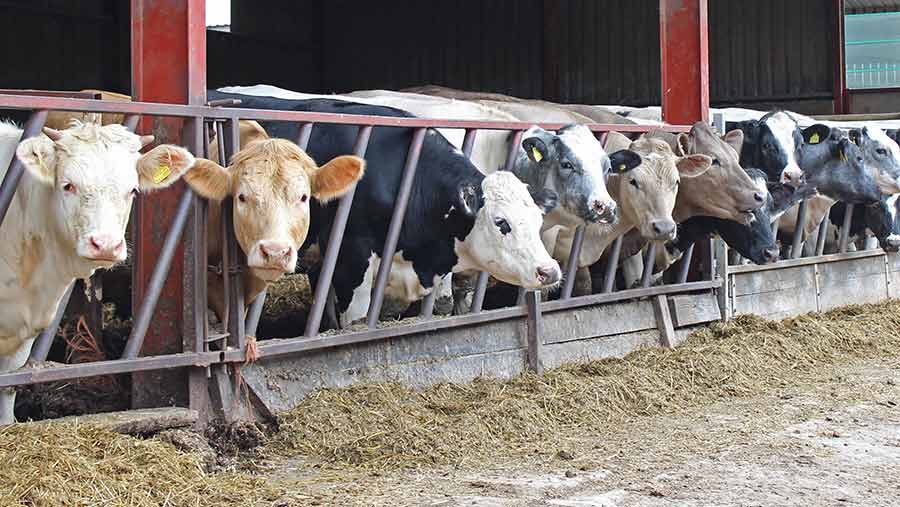 Today, the business has expanded to a throughput of 110-130 head finished each year from the 65ha holding.

Performance of the beef continues to improve and the kill sheet received from St Merryn Meat at the beginning of July shows grades of up to -U3 and deadweights of up to 387kg for ages ranging from 19 to 23 months.

Most are 50:50 dairy x beef breeds and Mr Fairbairn says: “I find cattle fed a better ration for longer seem to have better carcass quality with a higher killing out percentage.

“With our previous ration and dry cereals as our main energy source, we would have waited until at least 24 months to finish the dairy cross cattle and used to have around 15% more O+ and comparably less R and –U grades,” he says.

As a farm contractor himself – specialising in silage, racehorse hay and cultivations – he may also now find himself processing cereals.

“I have upgraded the machine to a Korte 700 with a throughput of over 10 tonnes/hour,” he says. “I may still use it for dry rolling corn for those who haven’t seen the light – although one day I’m sure everyone will latch on to crimping grain.”