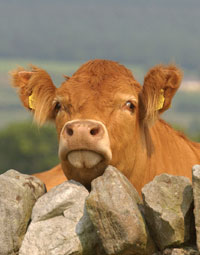 Higher heifer slaughterings in the first six months of 2009 are expected to continue over the second half of the year, keeping domestic beef supplies tight in 2010.

According to the latest Cattle Market Outlook from EBLEX, heifer slaughterings are some 6% up on the first half of 2008. This has more than offset the decline in steer and young bull marketings so far this year, leading to stable overall beef production.

“Providing the sterling/euro exchange rate continues to remain favourable, these trends are not expected to lead to any sustained undermining of the strength of the beef market seen in the first half of the year,” says EBLEX economics manager Mark Topliff.

There is also now no prospect of Brazilian beef returning to Europe to any great extent in either 2009 or the first part of 2010.

Higher heifer slaughterings are, however, forecast lead to a 2.5% contraction of the national beef breeding herd in both 2009 and 2010.

The dairy herd is also set to decline by 2.5% this year and 2.7% next year as the recent sharp fall in milk prices leads to further structural change, says the report.

“Indications of greater beef breeding through AI on many dairy units may help reduce the impact of the dairy herd contraction on dairy beef supplies, but this is only expected to have a marginal effect on the overall market given the scale of the national breeding herd reduction,” says Mr Topliff.

Equally, the volume of cow and adult bull slaughterings following the relaxation of BSE controls has now peaked, and supplies from these sources are forecast to fall back.

On the demand side, beef consumption is also predicted to reduce as the recession tightens its grip. “But this is unlikely to affect the overall dynamics of the market going into 2010 in view of the very much tighter supplies.”

EBLEX therefore predicts a favourable market balance between supply and demand from a producer perspective in the year ahead.

“We do, however, warn everyone to anticipate particular volatility in currency-market driven returns, and strongly advise producers to maintain the tightest possible cost control to ensure their systems are sustainable for the future,” says Mr Topliff.